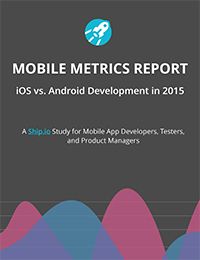 Mobile developers understand the rising importance of continuous integration (CI). The promise of CI is to speed up the overall velocity of the app team by building and testing every single code change. This environment of rapid change means that code integration issues are caught early, and testers and beta users can provide feedback on these changes as quickly as possible. As CI has become commonplace for app development teams, and many are moving their CI infrastructure to the cloud, the importance of build and regression test automation has grown.

To that end, we thought it would be important to generate a research report by examining survey data from more than 500 mobile app developers and benchmarked usage data from more than 250,000 automated builds, tests and releases on the Ship.io platform. This Mobile Metrics Benchmark Report shares insights and trends around the Continuous Integration (CI) landscape in regards to mobile app development. Key areas of focus for the report include CI adoption across major mobile operating systems (iOS, Android), frequency of testing, releasing and checking code, app build times and frequency, and common build failure reasons across geographies around the world.

5 Steps to Succeed With Blue-Green Deployment