DevOps is not a new concept, but it is still maturing.

In the seven years since the first “DevOps Day” took place in Europe, DevOps’ influence has spread to every corner of the world. Many organizations have embraced the concept, and it’s changed the way business is done. These companies have benefited from removing the gulf between development and operation teams—we have seen companies consistently churn out better software, in shorter time periods, to achieve new levels of efficiency.

However, this success has not been replicated for all sectors. Federal agencies, for example, have been slow to adapt to DevOps. For other companies, a rush to implement DevOps has led to ongoing issues that prevent them from realizing the true benefits of DevOps.

Many companies are moving in the right direction to implement DevOps successfully, but critical barriers still remain in developing the perfect culture. Here are three ways you can make the vision of DevOps a reality:

1: End the Culture of Fear

Much like previous aversions to cloud, the biggest barrier to implementing DevOps is the fear of change. This is a common problem across sectors, because trying something new can be daunting. This is true for federal agencies protecting national security or private companies attempting an ambitious new project. Successful DevOps begins with buy-in from the highest levels of management—but how do you get them on board?

The best approach is to start small by moving forward with a low-risk, high-reward pilot program. This is an opportunity to get the development and operations teams in the same room and allow them to work together toward a common goal. Once executives see the positive results—reduced time-to-value, efficiency gains and cost savings—they’ll be more apt to double down on establishing a companywide DevOps culture.

A DevOps culture is different and requires a shift in mentality. It also requires talented people with unique skills and experience. Since DevOps is still a relatively new concept—even by technology standards—talented people are scarce and in high demand. But companies can bridge the talent gap through a targeted strategy that incorporates both recruiting and training.

We are starting to see more companies provide educational support programs to develop talent. That must continue if companies want to build the next generation of DevOps leaders. These programs allow employees to grow their skills to better meet the needs of DevOps, which will fuel their career growth while helping their company improve its efficiency.

In parallel with training, companies must aggressively recruit tech talent from top universities that have DevOps classes. Recruitment of tech talent has rarely been more fierce, and it will only intensify as more federal agencies implement DevOps and compete for talent. The commitment from federal agencies to emerging IT strategies, including DevOps and agile development, will make them far more attractive to the best STEM talent.

The ability to deliver impactful ROI metrics is one of the best aspects of DevOps, because it removes all the guesswork whether it is making an impact. The numbers will tell you daily.

The first step is to measure your current metrics, whether you’re struggling to make DevOps work or implementing it for the first time. Companies must know how efficient—or inefficient—existing software development processes are before beginning to change. With the right talent in place with the right frame of mind, it’s time to track the improvement.

Also, understand what results to expect and plan accordingly. Based on our experience, deployment should be eight to 10 times faster with 50 percent uplift in quality (measuring reduction of incidents and incident duration), while software builds should be three to four times quicker.

If you properly set up the perfect DevOps culture, the results can be astounding. We’ve seen a company institute a DevOps structure and reduce release windows from two days to two hours, simply through repeatability and scalability.

The Goal: Break Down Barriers

Despite DevOps rapidly growing in importance, questions remain from those skeptical about its effectiveness. It reminds me of a line I hear frequently at conferences and shows that always gets a laugh: “To err is human. To err on 10,000 servers in 10 minutes is DevOps.”

The truth, however, is that DevOps is a very simple concept about working together and working smarter. It is the realization of a more efficient, more productive organizational model. It’s time for all companies to break down barriers, create a modern culture, and deliver better software in shorter cycles. 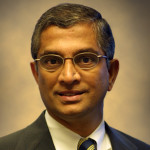 Mr. Ananthanpillai is the Chairman, CEO and President of InfoZen and has been with the company since January 2004. Previously, he served as the Chief Strategy Officer of ePlus, a business process automation and financial services company, responsible for technology, marketing, analyst relations and business strategy. Prior to that, he was the president and CEO of NetBalance, a venture capital-backed multimillion-dollar software company, which was successfully sold in 2000. You can connect with Raj on twitter or on linkedin.

The entire CI/CD/ARA market has been in flux almost since its inception. No sooner did we find a solution to a given problem than a better idea came along. The level of change has been intensified by increasing use, which has driven changes to underlying tools. Changes in infrastructure, such ... Read More
« Remarkable Growth
To Be Continuous Podcast: How Do You Deal with Your Data? »