In software development, application performance management (APM) is one of the grown-ups in the room. Not only has APM been around for a long time, but its solutions have evolved over several generations, making it one of the more mature product categories.

APM’s longevity makes perfect sense when you consider its fundamental purpose, which is to provide organizations with a way to understand the performance characteristics of their software. Value is delivered by alerting infrastructure teams when applications are performing slowly or poorly, and APM has the vast experience to do this job well.

The emergence of application stability has caused some consternation for die-hard APM fans. However, these two solutions embody very distinct monitoring focuses, which leads me to believe there’s room for both tools, as well as different teams for both.

APM: The Engine for Infrastructure and DevOps Teams

Before the cloud, organizations supplied their own physical hardware and monitored components such as RAM, disk space, CPU and memory. If you ran out of any of these resources, you were screwed.

And that was the beauty of APM: It enabled the people running the applications to anticipate when they’d need more resources.

Of course, rather than monitor physical machines, today’s infrastructure, SRE and DevOps teams monitor cloud instances. Gone are the days of running out to Best Buy and lugging back new hardware. Instead, a simple request for a new instance is submitted to a cloud provider, and instant access is received.

Rather than make APM obsolete, as some feared, the cloud presents two good reasons for continued reliance on this tool.

And that’s where APM steps in. Its main purpose is to help infrastructure teams figure out capacity planning. With the cloud, questions shift to include:

These are the types of things that APM does extremely well. Anytime you need to figure out how to optimize your current resources or when to buy a new server or cloud instance, APM tells you. This information is invaluable to the people running the applications, namely the infrastructure or DevOps team.

Application Stability: Where the Tires Meet the Road for Engineering Teams

Now, let’s be honest, APM doesn’t have its strongest showing when the person who runs the app is also the person who builds the app. And that’s exactly the scenario presented by mobile development and iterative coding.

Rather than going through long development cycles, software now gets pushed to the web on a daily basis, and mobile apps tend to have weekly or biweekly release cycles. This release speed is not only encouraged but expected in agile software development.

That means the chasm between building and running apps has shrunk, especially for mobile apps. More often than not, the people building the apps are the people releasing them. There is no gap. And, with mobile, companies no longer need to worry about expensive physical hardware but rather about the end user experience. The customer becomes the focus.

Unfortunately, APM is perhaps a little too set in its ways to help you do that. But it’s not APM’s fault. These requirements are not what APM is inherently built to do. It’s great at detecting problems and alerting infrastructure teams so they can toss the issue over the fence to the development team. However, its core strength isn’t providing information on how to fix the problems because it wasn’t built with the developer audience in mind.

Trying to refactor APM to help with stability and error issues is like tuning your engine when you have flat tires. They are completely separate components of the car, built for different purposes. You can tune the engine all you want, but it isn’t going to move the car unless you focus on why there isn’t air in the tires.

In today’s iterative world, development teams care a lot more about how apps are running. There’s a demand for fixing actionable items. Developers want to know exactly what’s broken, what to fix right now and what can wait. In short, developers want aggregation and automation of errors. They want to know, “Do we build or fix?”

This trade-off between building new features versus fixing bugs is one of the key factors behind the adoption of application stability management tools. Developers need answers to several questions:

Whether running sprints or building in an agile manner, development work is planned in advance. Developers want to figure out how much new feature work will be included in a sprint versus how much bug fixing is required. And they need a tool that helps them automate the answer to that question. 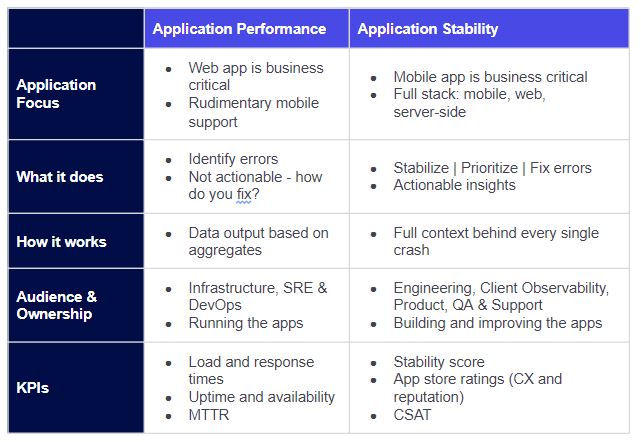 The beauty of application stability is that it brings together the errors captured by APM and enables developers to see at a glance which ones are worth fixing. As a result, five major benefits arise.

What Percentage of Your Development Team Has a Login to Your APM?

I’m often asked whether I think application stability will replace APM, and my answer is simple: no, I don’t. APM remains an essential part of developing software, and organizations still need to understand when they’re about to run out of resources and when there’s poor performance.

Some of you may be thinking to yourself, “Well, my APM product does what you’re describing for application stability, so I’m sure my developers are fine using it.” To which I poise the following challenge: What percentage of your dev team has a login to your APM? What percentage logs in on a daily basis? And, if they do use it, do your developers like it?

The answers to these questions may surprise you. After all, APM wasn’t really built for developers or for keeping end users happy. In contrast, application stability was born at the customer layer and is designed specifically to monitor the front end and ensure strong customer experiences with web and mobile apps.

Once you’ve had a chance to hear from your dev team, it wouldn’t surprise me if you discover that they’re pretty excited about the new kid in town.

Now, more than ever, companies who rapidly react to changing market conditions and customer behavior will have a competitive edge.  Innovation-driven response is successful not only when a company has new ideas, but also when the software needed to implement them is delivered quickly. Companies who have weathered recent events ... Read More
« SEO Optimization
Five Major Mistakes to Avoid in Enterprise Multi-Cloud Strategies »