Compuware has updated its Topaz for Total Test suite to enable organizations applying best DevOps practices to the development of mainframe applications to combine unit, functional, integration and regression testing within a single test scenario.

In addition, Compuware is making it easier to test multiple applications simultaneously. The latest update to Topaz for Total Test adds the ability to not only orchestrate a sequence of steps, but also design tests to measure how programs interact with each other and various data sets. 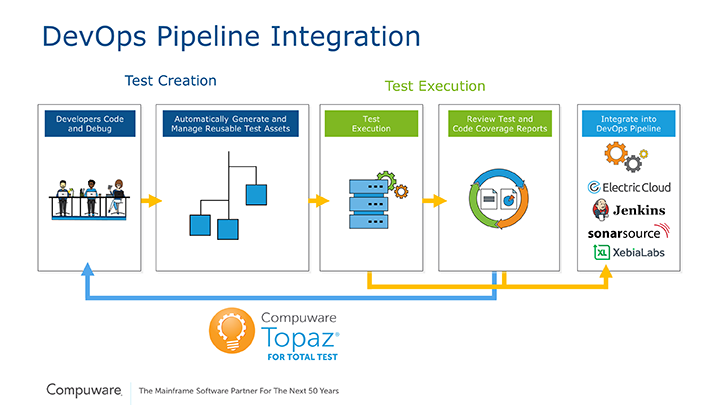 Also added is the ability to automate several testing functions, including the ability to launch functional tests within a browser and execute unit, functional and integration tests without having to manually create their own Job Control Language (JCL). According to Compuware, testers now can design test cases upfront based on program specifications before developing a program. What’s more, Topaz for Total Test has been integrated with the DevOps pipeline management platform developed by XebiaLabs.

Finally, Compuware announced that the Topaz 3270 Emulator now makes it possible complete one-off “green screen” tasks without leaving Topaz. Initiating a CICS transaction or accessing REXX utilities through the Emulator within Topaz, for example, makes it simple for developers to quickly resume Eclipse-based tasks without having to exit its testing environment or toggle between tools.

DevOps has become a greater imperative in mainframe environments, O’Malley added, as organizations look to leverage investments in existing mainframe applications rather than try replicating functionality that already exists on a mainframe in a distributed computing environment. That approach helps to reduce sharply the amount of technical debt an organization needs to service when they duplicate functionality across two or more platforms. Mainframe teams that historically have relied on waterfall developments process have been challenged by keeping pace with the rate of change. As applications that are deployed on a distributed system look to invoke a mainframe application function, organizations that have deployed those applications need to keep pace with a much faster rate of development, especially when it comes to application programing interfaces (APIs).

It may take a while longer for DevOps practices on mainframes to become adopted widely. But as the rate of innovation continues to increase, thanks to the rise of various digital business transformation initiatives, it’s apparent that mainframe application development will need to become more agile. The challenge at this point is not so much the availability of DevOps tools for the mainframe, but rather training the teams that build and deploy those applications on when and how to implement DevOps practices.

“The Automated Enterprise” e-book shows the important role IT automation plays in business today. Optimize resources and speed development with Red Hat® management solutions, powered by Red Hat Ansible® Automation. IT automation helps your business better serve your customers, so you can be successful as you: Optimize resources by automating ... Read More
« DevOps Chat: Computing on the Edge, with Swim.ai’s Simon Crosby
Integrating Maven and Nexus for Continuous Delivery with Jenkins »