In a recent episode of the Continuous Discussions (#c9d9) podcast, a group of industry experts discussed why DevSecOps is officially more than just a buzzword, tips on how to get everyone in the organization to own security and some of their own challenges and experiences baking security into the software delivery pipeline.

Continue reading for some of their top takeaways!

DevSecOps is really more about a cultural shift, said Shimel: “DevOps is DevOps. It’s not just about Dev and Ops, though. DevOps is about the whole organization adapting a common cultural way of interacting including security, and bringing security into that culture, into that software ordination assembly line.”

Integrating security into development practices takes a lot of collaboration and communication, per Wang: “It’s easy to say security should be part of the process. But in practice, it’s difficult to do. When you have a security testing process that takes days to complete from the input to the output, and then you have developer teams releasing 500 releases a day, those are two very different cultures. It’s usually an iteration process but it takes a lot of team communication, a lot of sitting down, figuring things out for security to be part of it, and so it’s a not an easy process.”

Why DevSecOps and not just DevOps? Well, security people weren’t necessarily invited to the party, explained Thrasher: “It’s a cultural challenge that security hasn’t necessarily been an integrative part of a lot of the DevOps transformations. I think ‘DevSecOps’ exists because either we’ve left security out or they’ve stayed outside this transformation that’s happening.”

Weeks wanted to let nonbelievers know that DevSecOps is real and more than just a buzzword: “DevOps and security can integrate with each other and integrate successfully at scale. There are organizations of a couple of hundred or even a couple of thousand people that have a DevSecOps practice in place that are continuously improving it, adding an automated security, so it’s definitely gone beyond buzzword status.”

Including security in the release process should be a no-brainer, according to Tandon: “I think of it as common sense. I don’t even understand how security has been left out. I don’t understand how we have these huge pipelines, we’re releasing a hundred code releases a day and then, boom, we’re stopped. We’re stopped for scanning.”

Common Barriers to DevSecOps and Patterns for DevSecOps Success

Many security issues have been around for a notorious amount of time, which is where the software delivery industry can improve, said Wallgren: “Where are most of the exploits coming from? The vast majority of them as I understand it are coming from well-known longstanding security issues that have been out there for a long time or, at least long by technology standards. And so a lot of it is just simple stuff that we need to be better at.”

Security as code is the next step in truly integrating security with DevOps, explained Weeks: “I was just talking to someone in Europe at a big telecom company, and they were saying, ‘I’m on the security team, we’re working with development, and we’re getting closer. We have all these rules and things that developers need to follow and we’ve been working with getting them to follow them more.’ And I said, ‘That’s really cool. Any of those rules or policies instrumented as code?’ And he responded cross-eyed like, ‘What? Code?’”

Tandon shared an eye-opening experience with a customer: “I’ve seen a situation where we were about to go to production—it was DevOps with security toward the end—and we got 4,000 hits and we had to go to production, most of them were ignored. So are we really securing our system or are we making our own system even more insecure by doing that?”

Want to dive deeper into DevSecOps? Industry expert John Willis, co-author of “The DevOps Handbook” and “Beyond The Phoenix Project” and VP of DevOps and Digital Practices at SJ Technologies, is scheduled to lead a full day hands-on workshop immediately following DevOps Enterprise Summit in London and Las Vegas. Register soon—space is limited!

Register for the London workshop

Register for the Las Vegas workshop 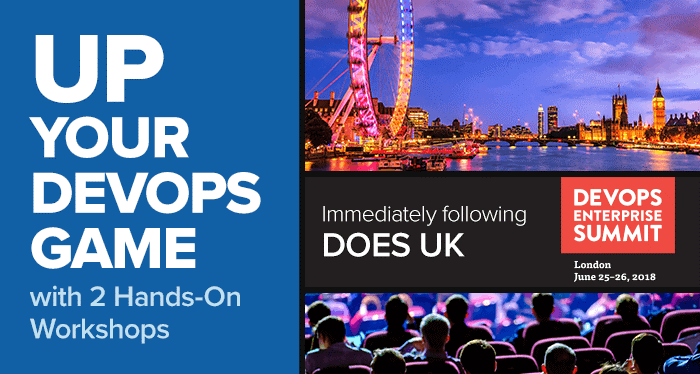