Datadog has added support for Microsoft Azure DevOps to its namesake monitoring and analytics platform.

Ilan Rabinovitch, vice president of product and community for Datadog, said Microsoft Azure DevOps, formally known as Visual Studio Team Services, is gaining traction as a continuous integration/continuous delivery (CI/CD) platform that can be deployed on-premises or in the cloud.

Via this integration DevOps teams that have adopted Microsoft Azure DevOps can now pull in events to create metrics from their continuous integration pipelines, and then correlate that information in real-time against Datadog is pulling from their entire stack in Datadog. DevOps teams can also configure to monitor gates in their Azure DevOps deployment pipelines, enabling them to detect and abandon bad releases automatically, said Rabinovitch.

Finally, DevOps teams can also employ Datadog to measure the efficiency of their processes by tracking, for example, how often builds are completing or failing or the frequency of code commits, added Rabinovitch. 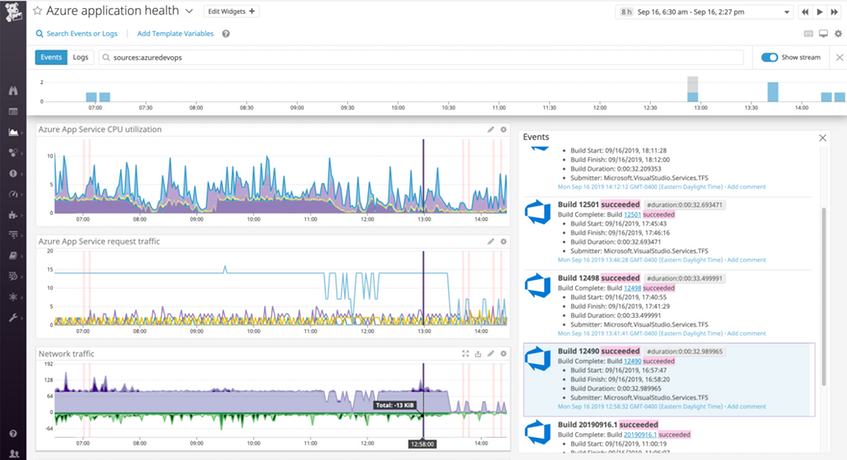 Microsoft has been pouring significant resources into building out Microsoft Azure DevOps over the course of the last year. At the recent Microsoft Ignite 2019 conference, the company released Azure DevOps Server update 1.1 release candidate to address some bug issues before organizations deployed the platform in production environments. Microsoft also has added previews of auditing tools, extended reporting capabilities, enhanced the user interface for the repositories page to be more mobile device friendly and added more billing options.

Microsoft Azure DevOps in time will play a much larger role in the company’s bifurcated approach to hybrid cloud computing. On the one hand, the company is driving an increasingly larger portfolio of Azure public cloud services. In on-premises IT environments there is a massive base of Windows servers coupled with a nascent Azure Stack platform that provides organizations with the option to deploy the same IT environment Microsoft employs on its public cloud. The long-term goal is to make it easier for organizations to build and deploy applications across hybrid cloud computing environments using the same DevOps pipeline.

Of course, Microsoft Azure DevOps is not the only CI/CD platform that might be employed to achieve that goal. As rival CI/CD platforms continue to extend their reach into Azure and Windows environments, Microsoft will find itself competing with a small army of rival DevOps platforms that span not only Azure, Windows and Linux platforms but also rival cloud platforms such as Amazon Web Services (AWS) and Google Cloud Platform (GCP).