We are all familiar with ‘everything-as-code’—a pattern that started with infrastructure-as-code and has now extended to other areas such as architecture-as-code,  security-as-code and more. However, all the incarnations we have seen so far have been less than ambitious! The dawn of cryptocurrencies and the underlying blockchain technology is moving us firmly toward organization-as-code. Org-as-code is the most disruptive evolution we have seen so far. The crypto world uses a different term for it: decentralized autonomous organization (DAO).

Before you freak out because, “OMG crypto!” let me assure you that I am not trying to sell you any of the 9,000 (at last count) cryptocurrencies. Undoubtedly, crypto has polarized public opinion. There are crypto maximalists who believe that crypto is the solution to everything. You often hear, “Bitcoin solves it!” Then, there are the crypto skeptics who dismiss the movement as simply digital tulips—a Ponzi scheme at scale for the internet age. Only time will tell if they are right.

Now, my opinion falls in the gray area in between, where some groundbreaking new ways of working are evolving. People across the globe are collaborating in decentralized, efficient, democratic and non-hierarchical ways in the world of crypto. Radical new constructs for the internet age are being piloted—DAOs, smart contracts, pseudonymous identities, tokenomics, etc. just to name a few.

A DAO is a way to work with like-minded folks around the globe where the business (the org) is owned and managed by its members in a democratic way.

As opposed to traditional organizations that are structured in a top-down hierarchy, with many layers of management and bureaucratic coordination, DAOs provide an operating model for people and institutions that do not know nor trust each other, who might live in different geographical areas, speak different languages and, therefore, are subject to different jurisdictions. Instead of legal contracts managing the relationships between people, computer code enforces the rules.

Some of the key features of a DAO are:

Colony.io is one startup that helps set up DAOs. A screenshot below from their site gives you an idea of the elements of organizational design that can be (re)defined in the radical new DAO world. 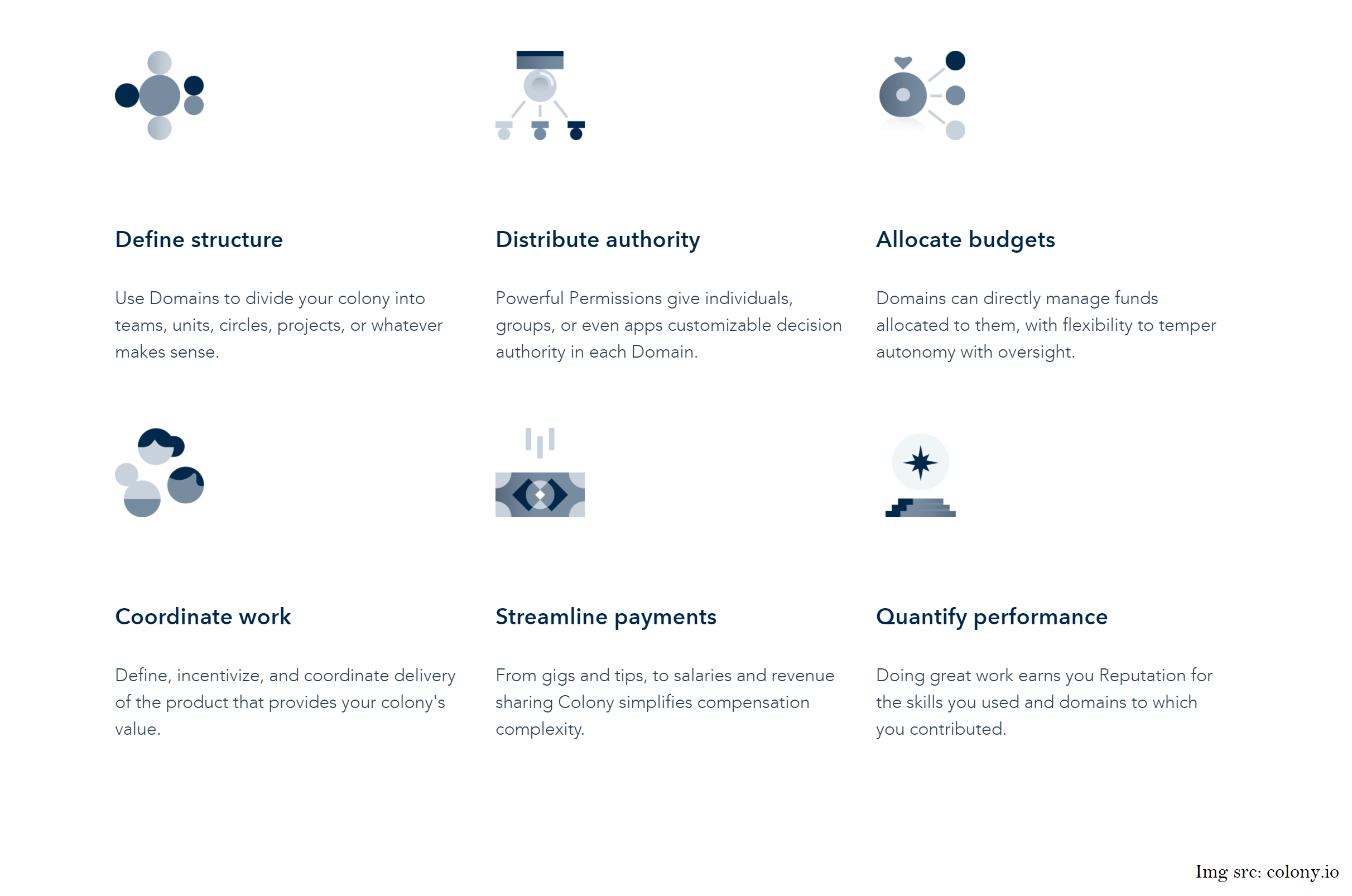 Do We Really Need DAOs ?

Here are a few challenges that DAO attempts to resolve that you often see in conventional centralized organizations:

Before you dismiss this as utopian and unrealistic, here are a few real-world of examples of DAOs in play

These are just a few examples. Adoption is exploding, and stretching into areas like charities, freelancer networks, venture funds, investment clubs and more.

DAOs are still emerging, and there are many aspects that are yet to be fully explored, especially around legal status, regulatory frameworks and compliance. It is, however, only a matter of time before the DAO way of working becomes mainstream.

While building constructive culture, engaging workers individually and helping staff avoid burnout have always been organizationally demanding, they are intensified by the continuous, always-on notion of DevOps.  When we think of work burnout, we often think of grueling workloads and deadline pressures. But it also has to do with mismatched ... Read More
« Engineering Applications for DevOps (Part 1)
Change Is Knocking: The Future Readiness with Ian Khan »