A recent report from Dimensional Research reveals that the demand for on-premises software is equal to that of public cloud. The report, which was commissioned by Replicated, a company specializing in on-premises software modernization, queried 405 participants in software development, executive, product management, sales and services roles to determine the needs, usage and challenges of on-premises software.

The report revealed that some 90% of companies surveyed said their on-premises sales of software solutions continue to rise, while 70% that do not currently offer on-premises solutions intend to in the near future.

“In the past few years we’ve experienced a steady increase in interest from leading global companies who see that modern on-prem software delivery through containers and Kubernetes can make data protection and security much easier,” said Grant Miller, co-founder and CEO of Replicated. “Coupled with growing customer demand, it’s a win-win scenario for any industry.”

While Miller’s view may be optimistic, the survey also revealed that the majority (65%) of companies cited privacy compliance as the top reason for using on-premises software delivery; an indication that the market is being influenced by cybersecurity issues more than any other factor. However, 54% also stated uptime and reliability were a primary driver for on-premises solutions, while 45% noted the importance of integration.

The report indicates that enterprises, which have cited digital transformation and a movement towards the cloud as critical factors over the last two years, may also be thinking more about on-premises solutions in light of cybersecurity and compliance concerns. This, in turn, means that DevOps has the potential to gain even more traction in the enterprise.

While the report mentions the merits of an on-premises software strategy, it does raise the question of why more enterprises have not moved in that direction already. That hesitation to re-embrace on-premises software can mostly be attributed to perceived complexity, time commitments and the cost of engineering resources to make it happen.

Complexity is further highlighted by 74% of survey respondents reporting that it would take more than a week to install and configure on-premises software, and 29% stated an install could take over two months. For the 16% that claim they can rapidly install and configure on-premises software in less than a week, the potential for growth in the market is notable.

While the future remains somewhat uncertain, the report from Dimensional Research runs counter to other reports, such as a Synergy Research Group report that revealed in 2019, spending on cloud platforms edged past the resources spent on acquiring servers and software for on-premises data centers. “60% of the servers now being sold are going into cloud providers’ data centers and not those of enterprises,” said John Dinsdale, a chief analyst at Synergy Research Group, confirming the trend. “Clearly, companies have been voting with their wallets on what makes the most sense for them.”  Dinsdale said the growth of cloud infrastructure will continue to accelerate aggressively over the next five years.

Although conflicting observations tend to add to the market confusion, one thing is certain – DevOps shops have market opportunities to service customers deploying both to the cloud and on-premises software. 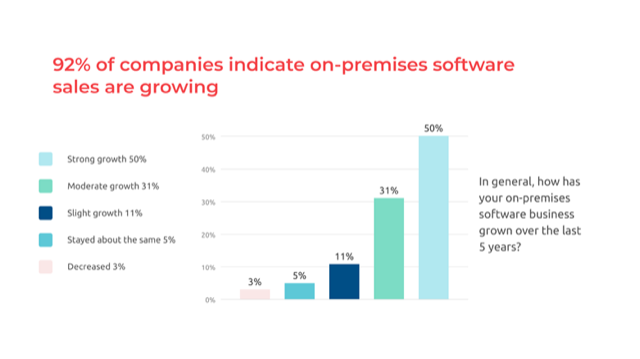 Now, more than ever, companies who rapidly react to changing market conditions and customer behavior will have a competitive edge.  Innovation-driven response is successful not only when a company has new ideas, but also when the software needed to implement them is delivered quickly. Companies who have weathered recent events ... Read More
« Will App Dev Become a Normal Competency?
Businesses Are Prioritizing Composable ERP Strategy as Pandemic Accelerates Cloud Migration »