As software eats the world, it’s hard to have a conversation about anything that isn’t directly related to or driven by modern mobile, web and IoT applications. DevOps describes the modern approach to building these applications. But like all new movements, there is a cost. And while some of the costs associated with modern development are not new, it’s becoming more and more clear that DevOps organizations have to pay their tech tax or prepare for trouble. 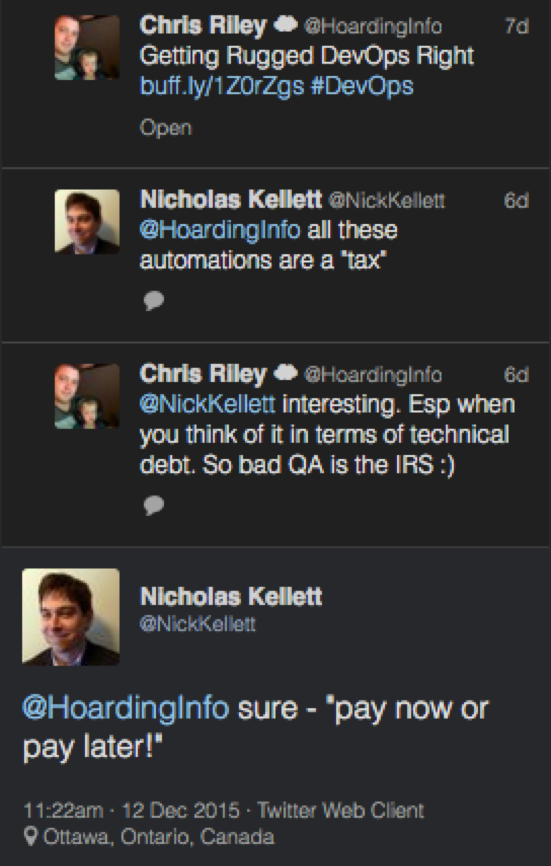 Nick knows a little about the evolution of modern development, as he has been a part of the transition from enterprise line-of-business (LOB) application development such as SharePoint toward more Agile adoption of APIs within those heavy systems, and he is now working on bringing LOB app development into DevOps. Not a small feat. As an artifact of working with enterprises, he also knows that some of the effort in deploying anything new is making sure that it sustains over time.

Our conversation centered around the fact that eventually, you have to get real about your DevOps implementation. And the sooner you get over your Docker, microservices and culture honeymoon, the sooner you can focus on something that is sustainable.

I have a former co-worker who was fond of saying, “You either sell candy (something people are excited about), or medicine (something people have to take but don’t want to).” In the DevOps world we are very much stuck in the massive ingestion of candy, without much consideration of the long-term impacts. But ignoring the medicine aspect results in technical debt.

We most often refer to technical debt as the compounding of application issues that are ignored over time (perhaps small bugs ignored at the beginning of the year which have compounded to more serious implications by the end). But technical debt is not limited to the application. It also relates to the pipeline itself.

As implementations mature, many organizations start to see debt surface in a very clear way. Components of the pipeline start to go from automated to manual, integration between tools becomes a library of scripts, and team members get sucked into the care and feeding of one problematic process versus the more beneficial strategy aspects of their jobs. But there are some organizations that have already felt the pain and have bucked up and paid the tax earlier on.

Related: A webinar I did on the topic of DevOps sustainability

What are those things you are not considering that will cost you with interest later?

What is interesting in DevOps is those tools that are designed to build DevOps speed—that candy—also can be used to build in sustainability—the medicine—which means that what I’m proposing does not create gates or overhead. So there is no reasonable excuse to avoid it.

When development teams prepare for their rapid release, pace creates some new challenges along the way. They are able to address those challenges, and with the same automation that they already love, make sure that the delivery chain sustains and doesn’t break apart over time. There might be a tax you have to pay for modern development, but if you pay it on time, it will not compound into DevOps technical debt. And it is still far less than the tax paid in the days of Waterfall development.

While building constructive culture, engaging workers individually and helping staff avoid burnout have always been organizationally demanding, they are intensified by the continuous, always-on notion of DevOps.  When we think of work burnout, we often think of grueling workloads and deadline pressures. But it also has to do with mismatched ... Read More
« End-User Analytics: A Reality Check to SLAs
Levvel Launches Chef Quick Start Offering »