Home » Why pervasive encryption is the future of data security 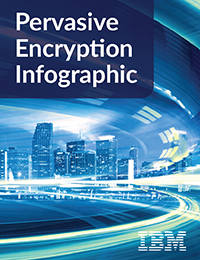 The truth about Data breaches is that they are costly. A recent Ponemon study found that the average cost of a breach in 2017 was $3.6 million. It’s not a matter of if, but when. That same study found that the likelihood of an organization experiencing a data breach of more than 10,000 records in the next two years is 27.7% (That’s up from 25.6% in 2016). Your data is either encrypted or exposed. Of the nearly 9 billion records breached since 2013, only 4% were encrypted.

This complimentary resource is offered by IBM. Download Now