Software as a service (Saas) is widely regarded as the most lucrative and compelling of the three cloud business and operation models. This is because it transfers the most technical support expenses and can be sold directly to the customer. However, despite the inherent value of the business model, many entrepreneurs will be hard-pressed to take full advantage of it without some additional technical and cultural assistance. 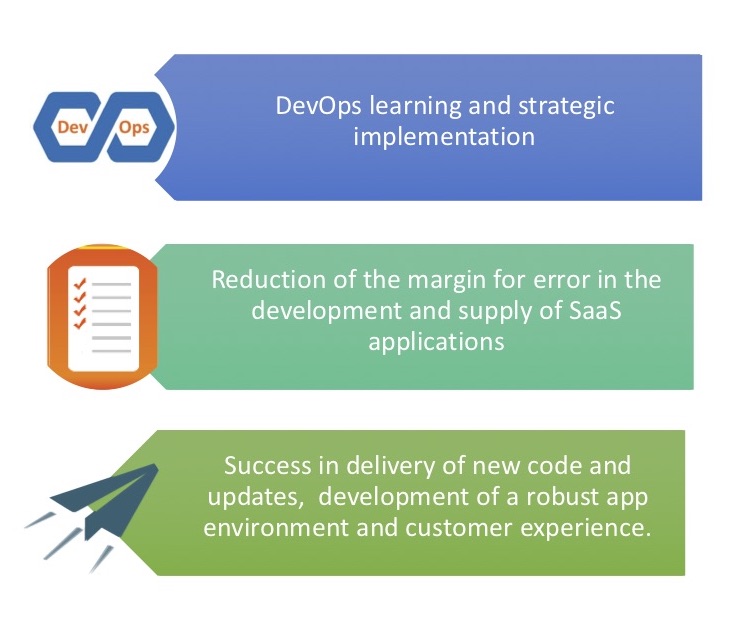 Integrating DevOps into the SaaS Product

Successful integration of SaaS applications involves immersion at the highest level—either that or the product has to be manufactured using one strategy from the very start. The construction and sustenance of SaaS applications therefore, needs to be done with DevOps as the operating system, per se.

In a broader sense, for a SaaS entrepreneur, success means the following:

All of the above is achievable by integrating DevOps throughout the developmental process, without which the construction of SaaS applications could become an operational nightmare. This is true for both grassroots SaaS entrepreneurs and cloud providers.

For the modern SaaS entrepreneur whose entire business and operational foundation is the cloud, following are some of the advantages held by DevOps from a technical standpoint.

The first advantage of DevOps automation toward SaaS entrepreneurs can actually be proven in a practical sense. Since continuous delivery spells the difference between application success and failure, it pays dividends to be free of interruptions and bugs, which can take away from the end user experience. This also will help you get a leg up against both the startup and established, enterprise-stage SaaS operator.

With the automation of each environment build, from the development stage and QA to production, DevOps allows you to release new code as often as need be rather than adhering to scheduled and timed releases of code. In turn, this allows you to make vital decisions and resolve issues in real time, negating the need for a repair meet.

According to the “State of DevOps Report” for 2015 by Puppet Labs, companies which utilize DevOps possess the capacity to launch code up to 30 times as often, and have lead times that are 200 times shorter. Not just that, but they have a failure recovery rate that is 168 times that of the average company that has yet to implement DevOps automation.

SaaS entrepreneurs should begin their DevOps strategy by setting DevOps configuration needs for the particular application as it is being constructed. This would usually contain the provisioning regulations, including database instances, network addressing and the arrangement of software instances.

The specific capabilities of a number of DevOps tools can and do vary here, which is why it is necessary to review the needs of the application against the work plan and the features of the project. This is to ensure that all the plans are headed in the correct direction.

As most applications that have been deployed into the cloud are highly unlikely to have a DevOps model-based design element, it can be to the advantages of the SaaS entrepreneur to verify whether any DevOps tools under evaluation offer the capability to design a template. This is to describe deployment independently of the development process, which can be aligned with legacy applications.

Aside from the value of DevOps in the development of SaaS applications that run on the very infrastructure the cloud provider offers, DevOps also can be utilized to assist with the migration of applications to other cloud computing models such as platform as a service (PaaS) and infrastructure as a service (IaaS). It also be used for the integration of several providers across a single cloud federation.

Since SaaS is currently being used by the majority of enterprises (67 percent, according to a UBM survey), it makes sense to focus on DevOps practices for organizational success.

Since SaaS has the lowest tolerance and margin for error, especially in the uber-competitive landscape that the modern SaaS entrepreneur has to operate in, using DevOps can potentially provide a significant advantage in terms of the following:

With the cloud market as competitive as it is, it is necessary to have the best development and operations approach. Also important is the culture in which the applications potentially will take shape and the values that will be integrated and ingrained within them.

It is said within the cloud-based entrepreneur community that although the SaaS environment has improved significantly over the past few years, it has by no means edged out the DevOps approach. The future of both the cloud and DevOps is entwined, and entrepreneurs should accept the fact that a year or two down the line, they will be synonymous with each other.

This makes is absolutely vital to get the correct approach early on, and already have an infrastructure based on DevOps, so that competition in the future can be facilitated and made considerably easier, and customer experience can be harnessed for enterprise success.