With the introduction of the Pipeline, Jenkins added an embedded Groovy engine, making Groovy the scripting language in the Pipeline’s DSL.

Here are the steps you need to take to set up a Jenkins Pipeline. 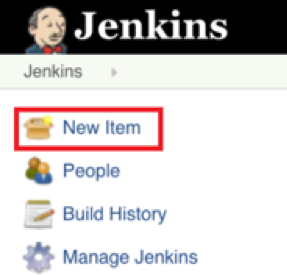 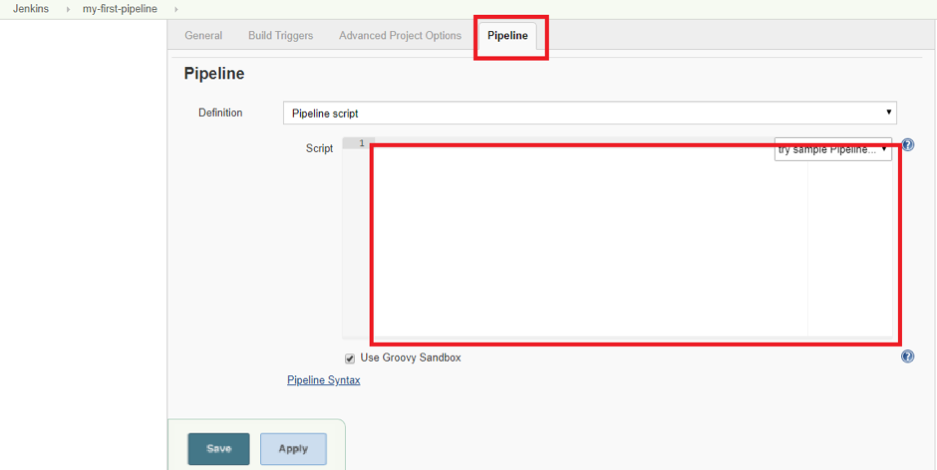 The red box in the middle is where you can start writing your script.

Pipelines has specific sentences or elements to define script sections, which follow the Groovy syntax.

The first block to be defined is the “node”:

A “node” is part of the Jenkins distributed mode architecture, where the workload can be delegated to multiple “agent” nodes.

A “master” node handles all the tasks in your environment. Jenkins agent nodes offloads builds from the master node, thus performing all the pipeline work specified in the node block.  For more details, read about Jenkins Distributed builds.

The “stage” section is required to segregate the work category as listed inline:

A specified pipeline will consist of several steps that can be grouped in several stages. For example:

Note: Each of the these can include more than one action.

For example, a stage to deploy your application can consist of copying the files to a defined environment for functional tests and to a dedicated server for performance tests/QA and once files are copied successfully, delivery process will start to deploy on any specified environment.

Each stage block specifies the tasks to be performed: 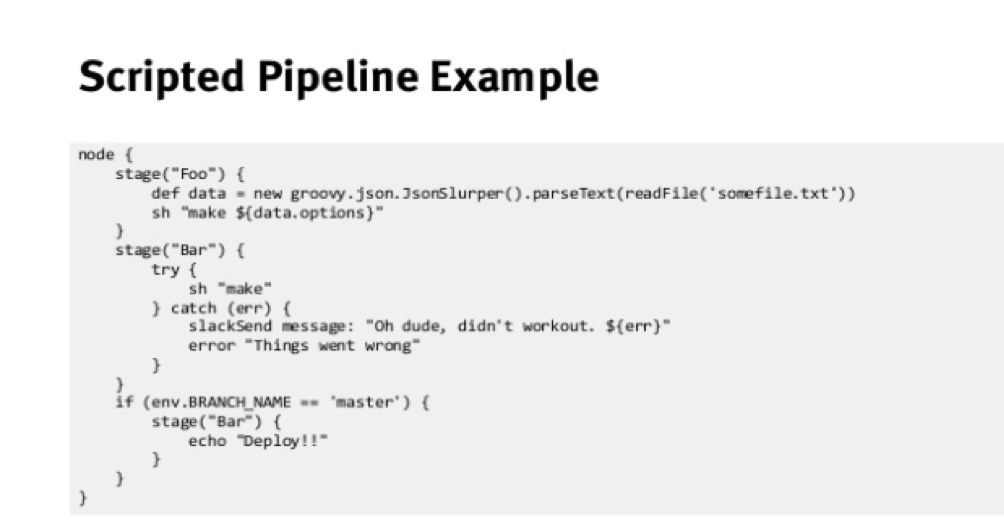 Stage blocks are also optional, but they are recommended because they provide an organized way of specifying tasks to be executed in the script.

This section builds on the information introduced in Getting started with Pipeline and should be treated solely as a reference. For more information on how to use Pipeline syntax in practical examples, refer to the Using a Jenkinsfile section of Jenkins chapter. 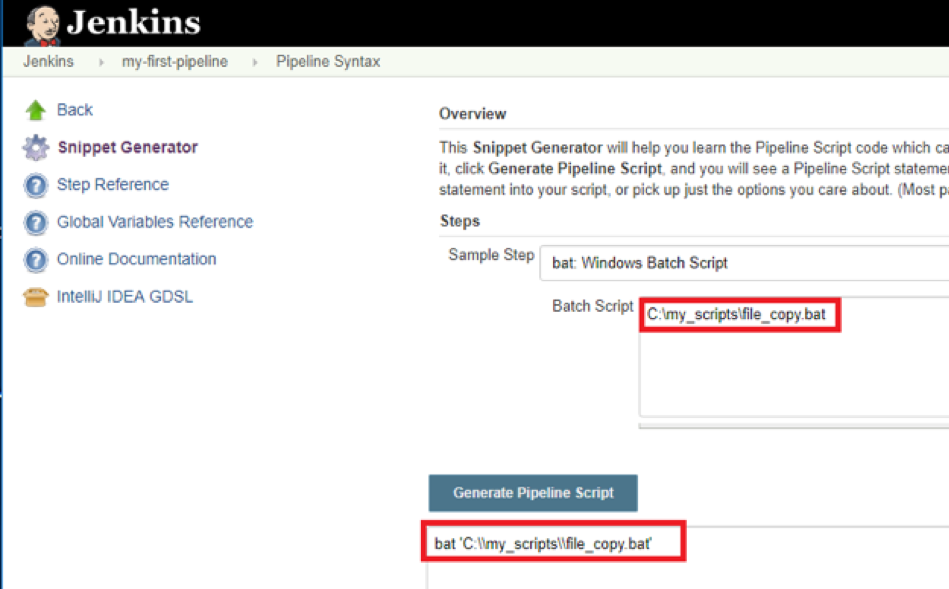 “Generate Pipeline Script” will create the desired sentence that can be added to your script immediately.

Pipeline supports two syntaxes, Declarative (introduced in Pipeline 2.5) and Scripted Pipeline. Both of which support building continuous delivery pipelines. Both may be used to define a Pipeline in either the web UI or with a Jenkinsfile, though it’s generally considered a best practice to create a Jenkinsfile and check the file into the source control repository 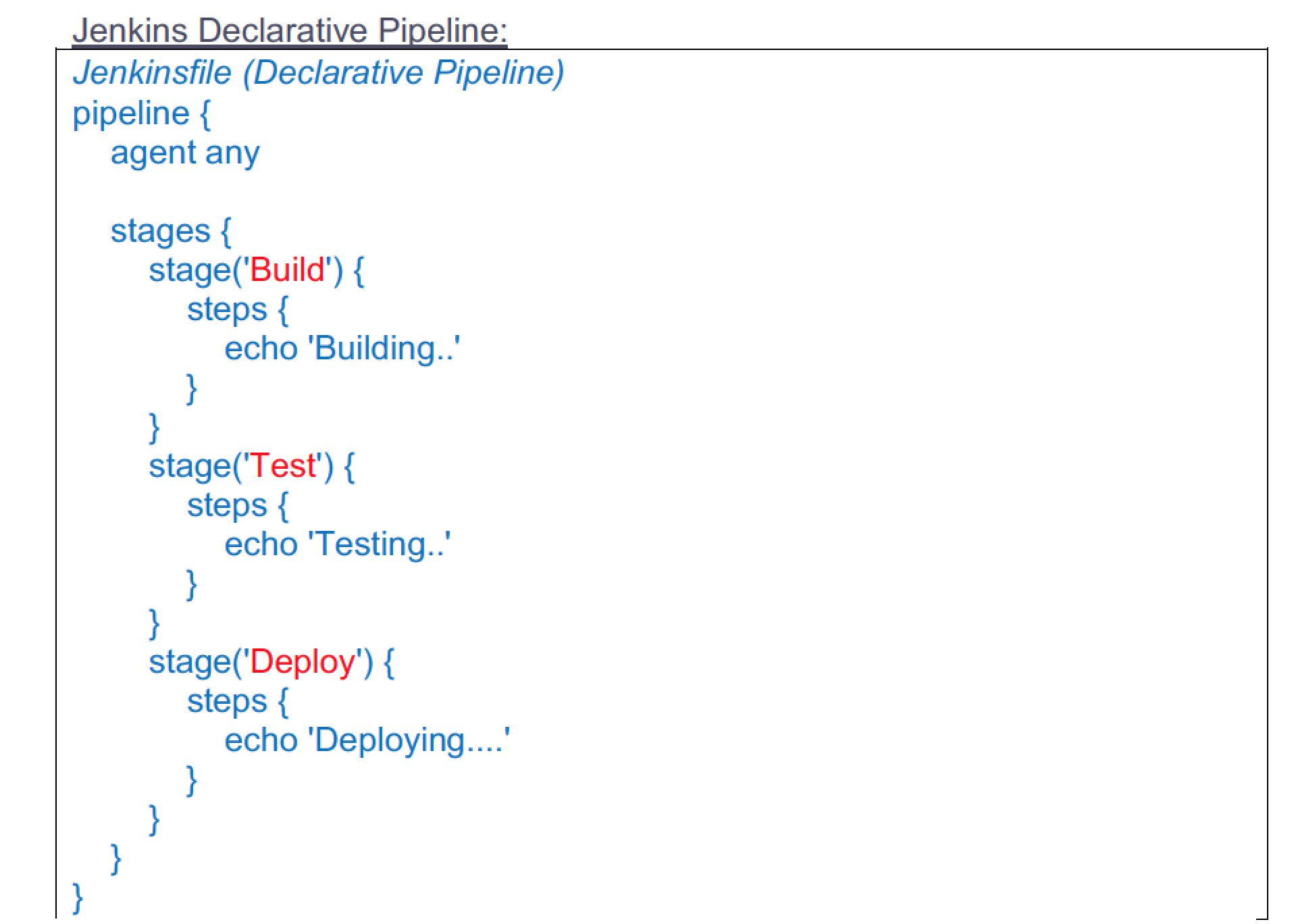 The checkoutstep will checkout code from source control; scm is a special variable which instructs the checkout step to clone the specific revision which triggered this Pipeline run.

Jenkins limits the execution of any Groovy script by providing a sandbox. The option “Use Groovy Sandbox,” shown below, is available in the Pipeline tab, and it allows the scripts to be run by any user without requiring administrator privileges. In this case, the script is run only by using the internal accessible APIs (which allow you to develop your script by using Groovy).

When unchecked, if the script has operations that require approval, an administrator will have to provide them. This method is known as “Script approval.” By default, all Jenkins pipelines run in a Groovy sandbox.

If the option is checked and unauthorized operations are used, the script will fail when run. Both the whitelist and the blacklist of functions can be checked at Script Security’s built-in list.