Royce Grace won the most tournaments in UFC history before he retired. With a record of 14 wins, 2 losses, and 2 draws, it’s understandable why he’s considered by some to be the most influential figure in the history of modern MMA. With 100% of his finishes from submissions, he’s undeniably Brazilian Jujitsu royalty. You’d be hard pressed to find anyone familiar with the fighting world that would argue against building a strong base in BJJ while learning to fight. Royce proved that BJJ was the single most effective form of fighting in the early nineties by submitting opponents much larger than him, like Dan Severn, in UFC 4. Severn had just shy of a 100 pound weight advantage on Gracie but ended up getting caught in a triangle choke. I can remember watching the video and trying to figure out how he made him tap like that. All the sudden fighting wasn’t just about kicking and punching anymore, the game had changed forever.

Fast Forward 12 years to UFC when the Master Royce Gracie is to make his return to the octagon. Matt Hughes crumpled him up like a paper napkin. Royce had continued to practice BJJ since his fight with Dan Severn as it was a successful strategy. The mistake he made was investing in a monoculture. Royce kept a razor point on his BJJ, but fighters like Matt Hughes were smart enough to put an edge on all the dull perspectives of their game. Hughes was a well decorated submission wrestler that knew he needed to work on his striking and maintaining his strength and endurance. Ronda Rousey made it clear after her last victory that she’d been working more on her striking too, which makes sense considering she’s already an Olympic medalist in judo.

At the end of the day it’s a fighter that wins a fight, not the discipline they practice. A well rounded fighter is going to be able to adapt to adversity better than someone that only has nth level experience in a particular area. The same is true for software methodology. A scrum master’s team will consistently be outperformed by a team taking a mixed approach. Not because something is inherently wrong with scrum, but that people get the work done, not the process. A team embracing a diverse approach is more likely to do what works. They will be open to more experimentation to figure out what is successful and to confirm when the current model isn’t working. Sometimes it’s the people not cooperating, but telling them there’s a problem because they’re not fully embracing the methodology is usually wrong. Often enough the methodology is being taken as gospel and is embraced too tightly.

I both like and understand kanban, but feel scrum has too much convention to adhere to specifically. I checked Google and it seems to agree with me:

Just to be fair, I checked to see how Google felt about kanban.

But Google didn’t seem to treat kanban as harshly.

If you can’t take my word for this maybe you’ll listen to someone else?

Just the other day Andrew Clay Shafer posted this on Twitter:

I did ask Andrew to offer an alternative approach if scrum wasn’t going to work, and he directed me to slide 46 of a presentation he did in Pittsburgh for a Ruby User Group (shown below). This slide advocates a mixed approach as well. I agree with everything Andrew encourages there, and can honestly admit I need to dig into XP technical practices a little deeper myself. This will not be an abandonment of current methodology and a complete shift in another direction, but an evaluation to see if I can fill some holes in my game. 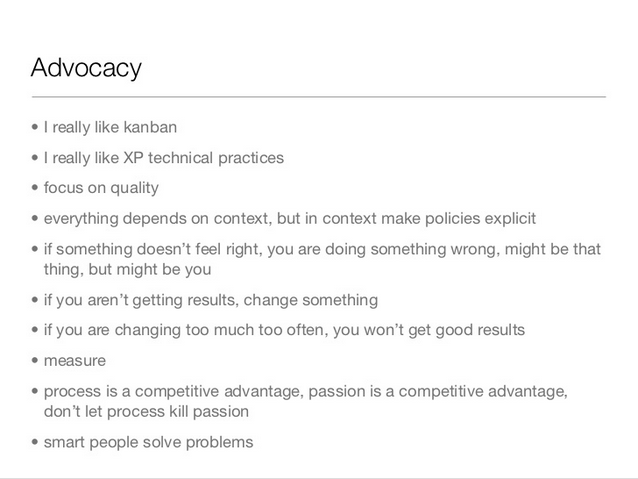 No matter where you are in your hybrid cloud journey, security is a big concern. Hybrid cloud security vulnerabilities typically take the form of loss of resource oversight and control, including unsanctioned public cloud use, lack of visibility into resources, inadequate change control, poor configuration management, and ineffective access controls ... Read More
« Deploying a MongoDB Cluster with ElasticBox
Is Your DevOps Team Ready For The Real World? »