Morpheus Data is moving to make it easier to adopt and manage both Ansible and Kubernetes. Its Morpheus 4.0 update, announced today, includes a distribution of Kubernetes as well as tighter integration with the open source Ansible automation framework.

Brad Parks, vice president of marketing and business development for Morpheus Data, said in the case of Ansible, Morpheus 4.0 will eliminate the need for some organizations to employ Ansible Tower, a web-based console and application programming interface (API) used to manage instances of Ansible. The goal is to make it easier for organizations to take advantage of the declarative Ansible automation framework without having to master all the low-level minutiae currently required to deploy and manage it, he said.

Morpheus 4.0 also makes it possible to view real-time job status updates and detailed log output and execute phased-based and operational workflows using multiple playbooks and brings governance, auditing and reporting tools to Ansible. Morpheus 4.0 also makes it possible to configure Ansible to run over the Morpheus secure agent communication bus, allowing playbooks to be applied to instances where SSH/WinRM access may not be feasible due to security constraints. Available on both Linux and Windows platforms, Ansible also can employ that bus to query secrets securely from the Morpheus Cypher service for storing application secrets.

In a similar vein, Morpheus Data is also moving to automate the deployment and management of Kubernetes, an open source container orchestration engine developed under the auspices of the Cloud Native Computing Foundation (CNCF). 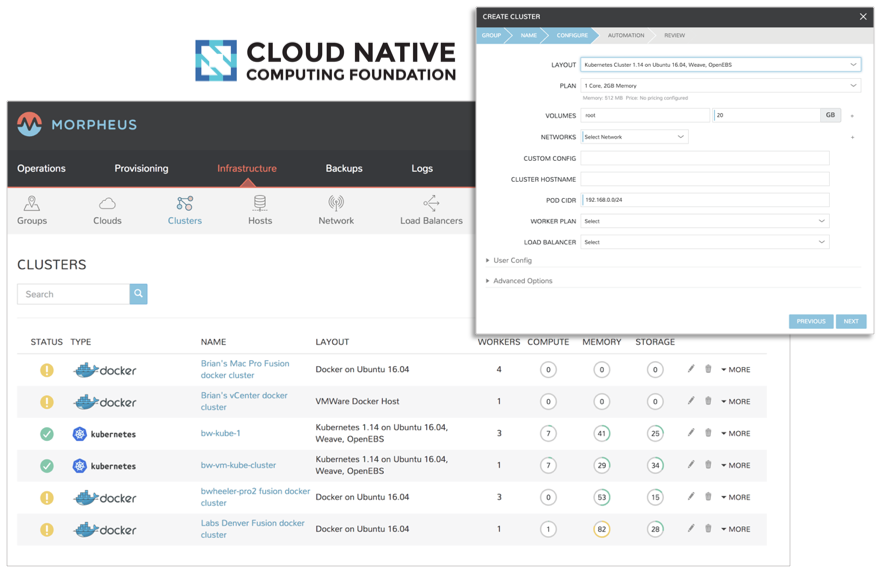 As Kubernetes moves into the enterprise, Parks said IT organizations will need a management framework that can automate the provisioning of application stacks on any combination of legacy virtual machines, Kubernetes clusters and bare-metal servers. Rather than be required to acquire and master separate tools for each platform, Morpheus 4.0 provides a management platform that allows a single DevOps team to manage multiple platforms more easily, he said. As an enterprisewide orchestration and automation platform, Morpheus is designed from the ground up to eliminate the need for DevOps teams to create complex playbooks by providing out-of-the-box integration with wide a variety of IT platforms, Parks added, noting Morpheus 4.0 also now includes Morpheus Jobs, a tool through which jobs can be scheduled or run ad-hoc using Bash, PowerShell, HTTP, Ansible, Chef, Puppet, Groovy, Python, jRuby or JavaScript.

The number of organizations attempting to unify the management of multiple platforms is expected to increase significantly in the months and years ahead as the number of cloud platforms being employed increases. The challenge those organizations will face involves not only what tools to employ to achieve that goal, but also defining the DevOps processes capable of spanning a hybrid cloud computing environment.

The entire CI/CD/ARA market has been in flux almost since its inception. No sooner did we find a solution to a given problem than a better idea came along. The level of change has been intensified by increasing use, which has driven changes to underlying tools. Changes in infrastructure, such ... Read More
« Test Automation University Enrollment Surges to 20,000 in Six Months as Engineers Skill Up to Advance Career Paths
How IoT Security Risks Derailing Robotics »