OutSystems today at its online NextStep 2020 conference announced it is making more extensive use of artificial intelligence (AI) to accelerate the building and deployment of low-code applications.

The company unveiled AI Assist to automate, guide and validate processes throughout the application life cycle and Architecture Dashboard, which employs machine-learning algorithms to enable IT teams to visualize complex application architectures.

Finally, OutSystems has added Integration Builder to simplify integration with packaged applications such as those from SAP and Salesforce. 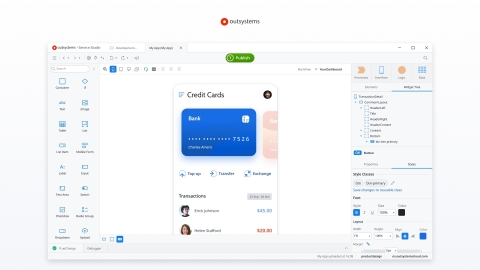 Mike Hughes, senior director of product marketing for OutSystems, said the AI capabilities being added extend an existing TrueChange capability based on machine learning algorithms that checks for bugs and architecture errors, analyzes the impact of changes to components and application dependencies, provides team and architectural governance and monitors performance in real-time. The goal is to automate as much of the DevOps process as possible on behalf of developers of low-code applications, he said.

Adoption of low-code platforms is accelerating at a time when many organizations have increased their reliance of software-as-a-service (SaaS) applications. While each SaaS platform makes available either a low-code or no-code tool for customizing the application environment, Hughes says enterprise IT organizations require tools that enable them to build and deploy custom applications and workflows than span multiple SaaS platforms and on-premises applications. That issue becomes especially apparent to any organization looking to accelerate digital business transformation initiatives in the wake of the COVID-19 pandemic, added Hughes.

In fact, he noted, the one thing the pandemic has reminded everyone is that change is the only constant. IT organizations need flexible application development and deployment tools more than ever.

Of course, there’s no shortage of options when it comes to low-code and no-code tools. In fact, Hughes said the distinction between these tools is starting to blur as platforms such as OutSystems make different capabilities available to different classes of developers depending on the use case.

The entire CI/CD/ARA market has been in flux almost since its inception. No sooner did we find a solution to a given problem than a better idea came along. The level of change has been intensified by increasing use, which has driven changes to underlying tools. Changes in infrastructure, such ... Read More
« JumpCloud Announces Okta Integration
NGINX Expands Portfolio to Include Service Mesh »

CI/CD is Still all About Open Source