Puppet today announced it has extended support for Windows environments across its portfolio of IT automation tools by adding a Group Policy Migration capability that enables multiple Windows configurations to be tracked simultaneously and offering to assist organizations seeking to deploy the open source Chocolately package manager.

In addition, Puppet has extended its support for Microsoft tools by adding a Puppet PowerShell Desired State Configuration (DSC) Builder module, through which the Powershell tools Microsoft relies on to configure operating systems are directly exposed.

Finally, Puppet has also added a Puppet VSCode Extension that gives Windows administrators the ability to invoke the Puppet Domain Specific Language (DSL) to access capabilities such as Intellisense and error-checking using their existing user interface and text editor for Windows. 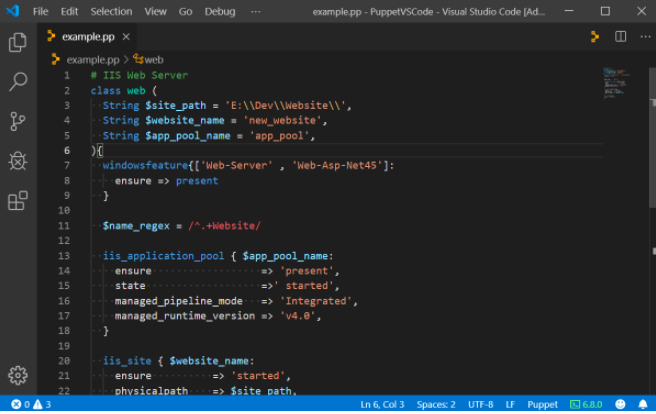 Puppet CTO Abby Kearns said interest in IT automation has significantly increased in the wake of the downturn brought on by the COVID-19 pandemic. While IT organizations that have been running instances of Linux have had access to a broad range of IT automation tools for years, Windows environments have not enjoyed the same level of parity even though half the workloads organizations are trying to manage today are based on Microsoft.net code, she said.

With more pressure to automate than ever, Puppet sees an opportunity to fill that void, Kearns added.

By relying on Puppet tools to automate both Linux and Windows platforms, an opportunity to reduce the total cost of IT also presents itself as organizations look to either limit or reduce IT headcount. Puppet claims there are already more than 40,000 organizations using its tools, including more than 80% of Global 5,000 organizations.

It’s not clear to what degree Microsoft is invested in IT automation tools, especially compared to IT vendors that make managing infrastructure as code both inside and out of the cloud their sole focus. However, since it launched Azure Microsoft has been investing in tools to manage infrastructure as code. The depth of the Puppet portfolio enables IT organizations to also apply IT automation to operating systems and now to applications via Chocolately.

In the meantime, the opportunity to extend IT automation into the midmarket remains significant. Most enterprise IT organizations have already embraced IT automation to a significant degree. Midmarket IT teams have generally not had the skills and resources required to manage infrastructure as code. However, as IT automation tools become more accessible to the average IT administrator, there may come a day soon when broad swaths of IT systems deployed by midmarket IT organizations will finally be automated.

« DevOps World 2020: 5 Sessions to Put on Your Schedule
PagerDuty to Acquire Rundeck to Expand DevOps Automation Capabilities Across Digital Operations »