At least that’s the word from SDx Central’s Cloud Management, Orchestration and DevOps 2015 Report in which 76% of respondents said the network was the most immature component in the cloud management stack.

Now to be fair, the network is one of the last components (I’m looking at you, security) to get on board the “automate or die” train, which has already left the station. That’s partly due to pressures from increased DevOps adoption in general and more specifically thanks to greater enterprise penetration which is continuing to up the amperage in the data center with respect to velocity and ease of deployment of all the network bits, bytes, and pipes needed to support each and every application.

It’s also partly due to the complexity of the network environment and the blast radius of potential errors or misconfigurations as well as the broad set of differences in the object models (and therefore APIs) used to configure, manage, and automate provisioning of network services. The more features and capabilities, the more differences between them.

OpenStack manages this difference by forcing standardization; that is, it defines the interface for LBaaS and if you want to be a part of the stack, you have to conform. Cisco ACI manages the difference by taking a declarative policy-based approach that let’s plug-ins define their own interfaces and expose them to ACI in a standardized way. VMware NSX and related technologies take yet another approach, leveraging its ecosystems’ APIs to integrate and orchestrate the network.

All are relatively new to the game (OpenStack may be the exception but even its network implementation has lagged far behind other components of its system) and thus the perception that the network is the most immature in the cloud management stack would seem to be reflective of reality.

But at least it’s heading in the right direction.

The network was going to have to be included  at some point in this grand journey to transform the data center through automation and orchestration. At some point Agile and DevOps methodologies being embraced by dev and ops were going to start paying off in the form of more applications with more frequent deploys. Eventually that was going to overw 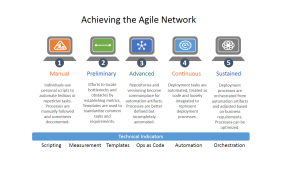 helm the network (and its staff) and give them cause to start figuring out how they were going to transform the network from the static and very fixed methods of scale and management to a more modern dynamic and fluid method.

Eventually is now. Whether it’s DevOps expanding into the network or SDN or cloud management stacks, the network has to mature in terms of its orchestration and automation capabilities if organizations are going to continue on their journey toward the agile network.

We’re still trying to move out of the first phase in that transformation; toward a culture inclusive of measuring and standardization with templates (or configurable policies, if you prefer). We’ve got a long way to go toward a sustainable, agile network and just as it’s taken years for Agile to truly envelope most projects within the enterprise, it’s going to take years for the network to get from where we are today to where we suddenly want to be yesterday but accept that we won’t get there till tomorrow.

No matter where you are in your hybrid cloud journey, security is a big concern. Hybrid cloud security vulnerabilities typically take the form of loss of resource oversight and control, including unsanctioned public cloud use, lack of visibility into resources, inadequate change control, poor configuration management, and ineffective access controls ... Read More
« Containers
To Be Continuous: The Fear of Shipping »