When considering the architecture of a new web app, it might be a good idea to include Node.js in the discussion as a key part of that architecture. Node.js could provide you with additional speed, can be used on numerous platforms and has an active community from which to get modules and other assistance.

Node.js is a server-side platform developed by Ryan Dahl in 2009. It was built on Chrome’s V8 JavaScript engine and designed with a non-blocking, event-driven I/O. It is also cross-platform, able to be run on Windows, Linux and OS X. Its non-blocking I/O is due to its use of asynchronous functionality, which keeps the server from waiting on data to be returned before being able to move on to other tasks.

Given the architecture of Node.js, a number of advantages are provided both to developers and the resulting apps they develop. A few of these advantages include speed, programming language consistency, real-time apps developed easily and a large number of modules/packages for developers to use while creating new apps.

Node.js offers speed advantages in many cases. First, it uses the Google V8 engine, which is optimized for JavaScript speed. Also, its use of non-blocking asynchronous behavior can ease the time it takes for users to see actions as complete, since things can be going on in the background while the user moves on to other tasks. 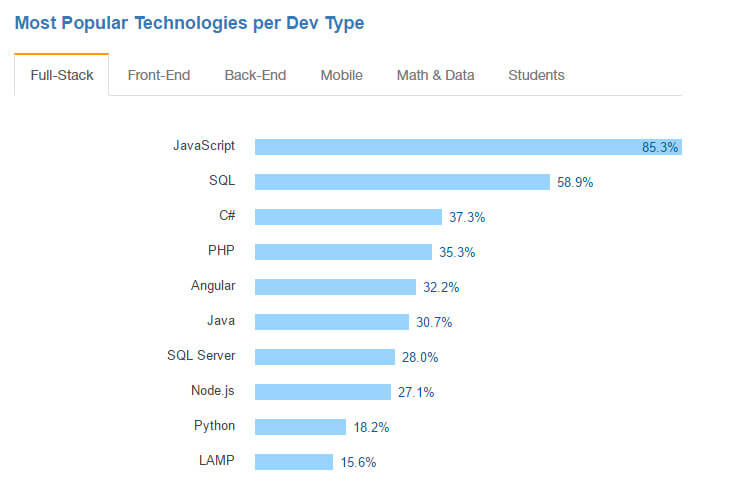 JavaScript is listed as the most popular programming language. Source: Thenewstack

Using Node.js, front-end and back-end code can both be in JavaScript, so your developers don’t have to transition between languages as they move through the stack. Some architectures, such as the MEAN stack (MongoDB, Express.js, Angular.js, Node.js), are designed around this principle. In this case, the stack uses JavaScript for Express, Angular and Node. MongoDB uses BSON for database queries, which uses the same syntax as JSON (JavaScript Object Notation).

Seeing full-stack developer as the largest occupation and JavaScript as the top language among both back-end and front-end aligns with what we’ve been seeing in overall JavaScript adoption.

For developers, this can help both with moving across the stack during development as well as help communication among developers, as they will be referencing the same language (JavaScript) while discussing programming decisions.

Node.js is a great platform for creating real-time apps. With a module such as Sockiet.io, you can create real-time chats, games and more. Along with its non-blocking asynchronous architecture, real-time apps can be developed with plenty of speed and responsiveness.

The Node Package Manager (NPM) makes it easy to install packages that others have developed to perform any number of tasks. This helps to encourage code-sharing among developers and to reduce the amount of custom development that has to be done when one or more packages can take care of that coding for you.

Some notable examples of Node.js use are Paypal and Uber, showing that it can, indeed, be useful for large projects.

Node.js and an all Javascript development stack helped PayPal bring efficiencies in engineering and helped rethink and reboot product, design and operational thinking.

Back in 2012, Paypal had a single app running all things, including UI, API and more. This included a lot of duplicated code that was copied and pasted from one app to another to make apps for different locations.

Using Node.js, the company was able to modularize and clean up its code and processes, which in turn sped the development of apps it needed at any given time.

Uber used Node.js from the beginning, and its distributed system was a perfect fit, since a lot of network requests are made. The non-blocking asynchronous I/O used by Node.js helped to ensure those requests could be made and handled quickly to provide the best service possible.

The benefits of Node.js have been proven. It helps speed development, can be used on numerous platforms and has an active community from which to get modules and other assistance. Include Node.js in your future conversations about website architecture.

Now, more than ever, companies who rapidly react to changing market conditions and customer behavior will have a competitive edge.  Innovation-driven response is successful not only when a company has new ideas, but also when the software needed to implement them is delivered quickly. Companies who have weathered recent events ... Read More
« Religious Wars
15 DevOps Expert Opinions on Continuous Integration and Delivery »