VMware this week expanded the scope of its cloud migration efforts to include workloads that aren’t running on its virtual machine. VMware HCX leverages replication and virtual machine mobility technology to make it easier to automate the migration of either VMware-based workloads or those running on rival platforms to the latest generation of VMware platforms.

Previously, VMware only offered this migration capability as part of larger services offerings that were focused on only migrating workloads running on VMware platforms. Allwyn Sequeira, senior vice president and general manager of the Hybrid Services Business Unit at VMware, said VMware HCX not only extends that capability to orphaned platforms such as Open Stack and Kernel-based Virtual Machines (KVM), it also marks the first time VMware has offered this migration tool as a separate, standalone offering.

Sequeira said VMware HCX provides an opportunity for organizations that have committed to a platform other than VMware to reconsider their options. VMware HCX provides a way to migrate thousands of virtual machines at a level of scale that significantly reduces the amount of time to make that transition, he said.

In some cases, Sequeira said customers have already employed VMware application migration tools to lift and shift thousands of virtual machines into cloud computing environments such as Amazon Web Services (AWS) in a few weeks. Overall, the rate at which those migrations are occurring has doubled every quarter for the last six quarters, he added.

VMware HCX is based on virtual machine mobility technology developed by VMware combined with a similar cross-platform workload migration technology the company gained in its acquisition of CloudVelox early last year. VMware HCX now provides organizations with the option of migrating virtual machines programmatically via an application programming interface (API) or via a graphical user interface (GUI). 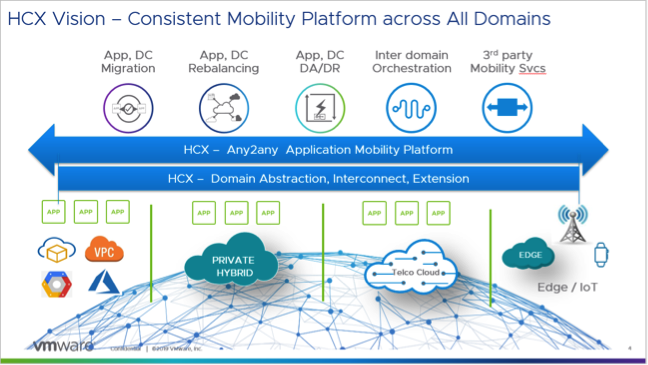 There exist multiple tools for migrating workloads into any number of cloud computing platforms. Many organizations are also taking advantage of Docker containers to encapsulate entire workloads so they can run on any platform. Deciding which path to pursue most often comes down to the level of integration required with the various services available on the targeted cloud migration platform.

In the meantime, as workload migration tools become more sophisticated, decisions regarding where workloads need to run are becoming less concrete. Competition for new workloads between platform vendors has always been especially fierce, and it used to be that once an IT organization made its decision, it was unlikely it would change its mind, given the effort needed to swap one platform out for another. Now, however, as application workloads become more portable, competition among platform vendors will only increase as they seek to convince IT organizations to shift existing workloads onto a different platform.

In general, that increased level of competition bodes well for DevOps teams, who are usually among the strongest advocates for change within any IT environment. The issue now is deciding which platforms within those already-cluttered IT environments make the best candidates for rationalization.