Microservices are all the rage. A Forrester study found that 76% of enterprises were rearchitecting applications for microservices.

At the same time, microservices are definitely not a silver bullet. Among those already using microservices in production, one study found that 59% said each microservice added increased operational challenges such as data management. Even more concerning, the same report revealed that when asked to compare the difficulty of troubleshooting different environments, 73% said microservices were more difficult, and only 21% said they were easier than monoliths.

But how did we end up like this? According to Matthew Sinclair, VP of engineering at BCG Digital Ventures, it is because that, as technologists, “we want to use the most modern tech, and sometimes we even want to do it with tech we’ve got no experience in. We see this with engineers, not because it’s the right thing to do but because they want to learn something new.”

The problem is, there is just as much chance of getting into a tangle with microservices as there is with monoliths. That’s because people often start breaking things up into microservices too early—they’ve heard it will be a good idea and they’ve seen some of the benefits, so they try to apply it to everything. In doing so, they create what some might call a “micromess.”

So, how do you avoid ending up in a micromess?

You need to go back to the fundamentals. One way to look at it is understanding that microservices are distributed systems, something many people will have experience with. They should also be familiar with what another panelist, Oswaldo Hernandez Perez, engineering manager at Improbable, called the first law of distribution: “If you don’t need to do it, don’t do it.”

That’s what people care about. Even if you’re developing a niche app for a highly technical audience, they are unlikely to care too much about how it got to them, only that it did and it is fixing a problem for them.

If the only way to achieve that is with microservices, then yes, you should definitely use them. If there is an alternative, then consider using that. Do not simply start breaking everything up into microservices just because that is what everyone is currently talking about.

Don’t Stick Your Head in the Micromess

Ultimately, microservices are an architectural pattern to reduce complexity. It does this, but it also adds complexity elsewhere. If used in isolation, then you’ll fix your complexity in one dimension and have it proliferate elsewhere. So, it is vital that you use the many other tools out there to minimize complexity across the entire organization.

It goes back to the question: What problem are you trying to fix? The majority of businesses can do that with boring tech. Granted, the likes of Amazon and Google, which are cloud-native to their core, can use microservices, but even large enterprises should be asking themselves if it’s really the right choice for them.

Established businesses are likely to have a significant legacy codebase, which needs integrating with. Again, microservices might not be appropriate in this situation—it might be worth saving them for cloud-native projects, and use boring tech to resolve the challenges within legacy IT.

Do You Really Need Microservices?

Time and time again, we come back to the fundamental question: What are you trying to fix with this product and/or technology? Not how, but what? What friction will you banish from the user’s life if they engage with your product? Only once you answer that question should you consider whether microservices is for you. Chances are, you may find you don’t need them by that point. 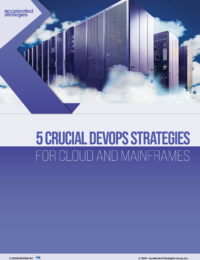 The assumption that large, established enterprises—from insurance companies to government agencies—can’t adopt Agile processes or DevOps is based on the falsehood that legacy technology stacks won’t allow for it; that existing traditional mainframe applications or legacy applications that large enterprises are built on are incapable of adapting to these approaches.  ... Read More
« 12 Factor App: Stateless Processes
5 Reasons Why DevOps Needs AI »