Laurie Voss, COO and co-founder at npm (@seldo), tweeted recently that JavaScript packages downloaded from their repository has topped 4 billion. On an annual basis, that would be more than 200 billion downloads. Wow. 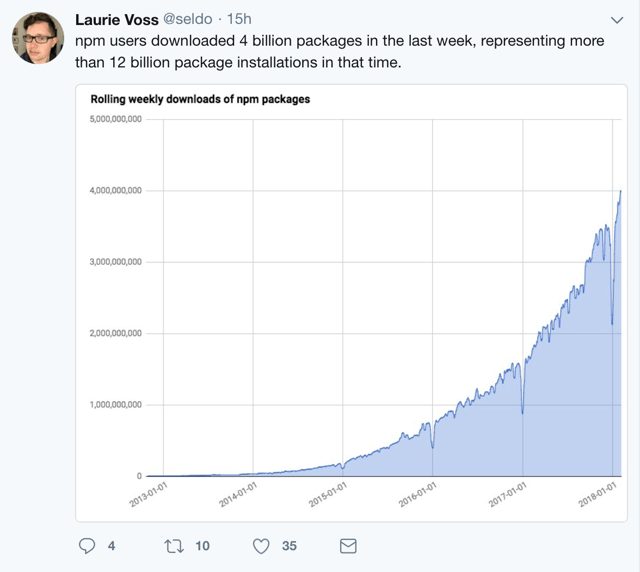 Just as open source software turns 20 years old this year, these numbers are a testament to the incredible magic that happens when communities of developers openly share innovations.

Laurie estimated that 12 million developers were responsible for the downloads. That means, on an annual basis, each JavaScript developer will download nearly 17,000 components. Imagine the time saved by not needing to code each of those functions from scratch simply by downloading a package in a millisecond from the internet.

What we’re witnessing here is a software supply chain in full effect. Open source projects contribute packaged code to the community, place it in public warehouses, and it’s then consumed by development teams around the globe to create new front-end, back-end or mobile applications for all of us. Every development team on the planet now utilizes a software supply chain that operates at insane speeds with massive throughput.

In a second tweet, Laurie wrote, “Since we have ~12 million users, that means the average user installed the neatly round number of 1000 packages in 7 days. In reality, most individuals installed very few packages, and a bunch of CI build boxes installed 10s or 100s of thousands of packages each.”

Essentially, there is an army of robots (automated CI tools) downloading billions of components from the web. While this type of automation is efficient, by itself it does not serve teams well.

Repositories to the Rescue

At Sonatype, we saw similar behavior by developers in the early days of Maven. Individual developers would download Java components directly from Maven Central. Maven users sitting right next to one another in the same room and on the same team would download the same versions of the same components needed for their builds, repeatedly. It was for this reason, among others, that our founders invented the Nexus repository manager.

While repository managers have been used for quite some time in the Java community, Laurie’s post tells us that adoption of the technology still lags in younger, less mature, packaged code ecosystems.

Not All Components Are Created Equal

If you dissect Laurie’s comment further, you will also realize that any developer can bring any package into your organization at any time. While this does make them more efficient, it also points to security and governance concerns. Every component was developed by someone else, donated out to the internet and consumed in the millions. But you have no true idea of the source or origin of many of the components.

Research I have done in previous years at Sonatype demonstrated that 5.5 percent (1 in 18) of components downloaded by repository managers had known security vulnerabilities. While the percentage is not very large, keep in mind that a repository manager will only download a component once. Once cached, future downloads of that component are unnecessary and the components can be reused infinitely by that team.

Within software supply chains, repository managers and private container registries represent procurement gates into the development organization. The gates can be left wide open where component flows are not governed or they can represent opportunities for quality and security checkpoints that ensure defects are not passed downstream.

What’s in Your Repository Manager is in Production

Using data from more than 133,000 websites, researchers from Northeastern University showed that “37% include at least one JavaScript library with a known vulnerability. From a per-library perspective, at least 36.7% of jQuery, 40.1% of Angular, 86.6% of Handlebars, and 87.3% of YUI inclusions use a vulnerable version.

“Alarmingly, many sites continue to rely on npm packages like YUI and SWFObject that are no longer maintained,” the researchers continued. “In fact, the median website in [NU’s] dataset is using a library version 1,177 days older than the newest release, which explains why so many vulnerable libraries tend to linger on the Web.”

What is Wrong With 200 Billion Downloads?

Nothing from an innovation standpoint. It’s awesome and we can all celebrate this achievement with Laurie.

At the same time, it gives us pause to reflect upon other concerns of our day, including cybersecurity threats, technical debt and wasteful context switching.

Open source components have become an integral part of today’s software applications — it’s impossible to keep up with the hectic pace of release cycles without them. As open source usage continues to grow, so does the number of eyes focused on open source security research, resulting in a record-breaking ... Read More
« Other Code Review Tools Left Behind as Collaborator Streamlines Workflows with Unified Code and Document Review
DevOps Chat: The Modern Software Factory and CD Pipelines w/ Scott Willson, CA Automic »