I attended my very first Monitorama this year, in Amsterdam, and I have thoughts!
Recent Posts By Dominic Wellington

First of all, it’s deeply weird speaking at Monitorama when you work for a vendor in the monitoring and observability space, but you’re not there as a sponsor. This would be pretty odd at the best of times, but the crowd at Monitorama are next-level. They are very comfortable with highly technical content, so they get irritated very quickly with (what they perceive as) marketing fluff. “Down in the weeds” doesn’t even begin to describe it; most people had never heard of the sorts of things that are part of life in enterprise IT (AIOps, Netcool, Patrol or any of our usual suspects), but, on the other hand, everyone I met could engage in a multi-hour argument over which monitoring tool is worst.

In fact, I would say that one of the highlights of Monitorama was the conversations in the hallway track. This is where all the Twitter loudmouths—I mean, “influencers” and “thought leaders”—who drive this industry congregate. If you manage to get into a conversation with them over coffee or beer, both of which were flowing freely, there can be a real exchange of ideas. I know I learned probably as much from those small-group chats as from the presentations on the big stage. I hope I was able to share some perspective in return.

Heck, as ridiculous as it sounds, even the dress code was a challenge. At the events I attend as a vendor, there are basically two speeds: full suit-and-tie battle dress or a T-shirt with my employer’s logo. Neither case requires much thought when packing. Monitorama, though? I’m no longer credible in my old Thinkgeek shirts from my sysadmin days, but I’ll be laughed out of the room if I show up in a tie.

I had answered the Call for Papers with a pitch about AI for distributed systems. Here’s my abstract:

The IT industry is in the middle of one of its regular swings between centralization and decentralization, driven by increased automation of the network fabric itself, as well as new use cases such as IoT. With more and more processing and autonomy devolved to the edges, old assumptions about how to manage and operate a network have to change. It no longer makes sense to try to forward all the edge alerts to a central location for analysis, but central visibility on the health of the network is more important than ever.

New techniques in AI-enabled observability hold the promise of helping NOC teams deliver better experiences for users of their networks, without requiring excessive manual work or heavy impact on on Operations teams’ personal lives. Machine learning enables knowledge to be captured and made available in context when it is most useful, accelerating incident resolution and improving user experiences.

My first hurdle was that, although I have public-speaking engagements at least once or twice a month—and have done for some years now—I normally appear under the flag of my employer. This fact has both pros and cons. On the positive side, I can usually rely on a substantial library of slides that I (and others) have created in the past. I have some known high notes that I will be aiming to hit, and the call to action at the end is pretty explicit (“try our stuff”). The other side of the coin is that, because the audience is aware of these factors at least at some level, I have to work that much harder to earn their attention, as they assume they are being sold to. As a vendor spokesperson, I am also somewhat constrained in how wacky and off-the-wall I can get—although I do always try to push the boundaries. At one speech last year, I talked about bicycles for several minutes, to the consternation of the organizers, until they worked out what I was building up to.

So I slaved away for some time over a hot Keynote, watched videos from past Monitoramas, consulted people in the industry whose opinions I respect and rocked up in Amsterdam pretty pleased with myself—to the point that I stayed out at In de Wildeman perhaps later than I should have on the night before Monitorama kicked off.

As speaker after speaker took the stage on Tuesday, I sank deeper and deeper into my seat, realizing that I had completely missed the mark—and as if that were not bad enough, several key analogies in my presentation had already been used by the first-day speakers. I did go to the party at Delirium Café, but left early to sleep the restless sleep of the nervous speaker. In the wee hours of the morning, I gave it up as a bad job, and spent several hours basically rewriting my entire talk in the light of what I had seen. Goodness knows what my neighbors thought of me rehearsing my lines, although I tried to keep the noise down.

Here is the result in Slideshare, or you can watch the video here. That link should take you to the correct time stamp, but if not, scroll to about 5h30′ in.

Katja Budnikov was also doing amazing sketchnotes (live!) of all the presentations. Here is the one from my session: 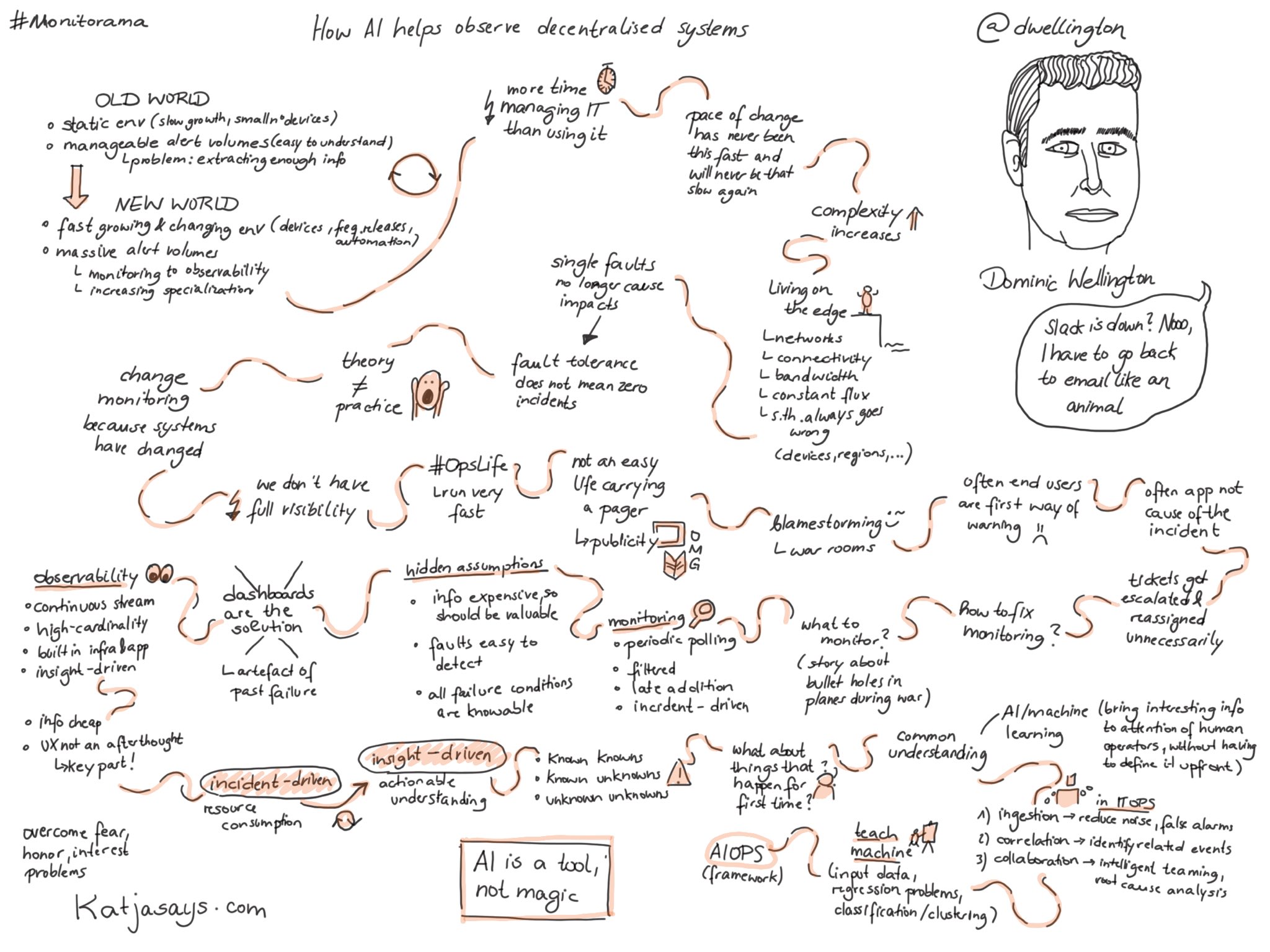 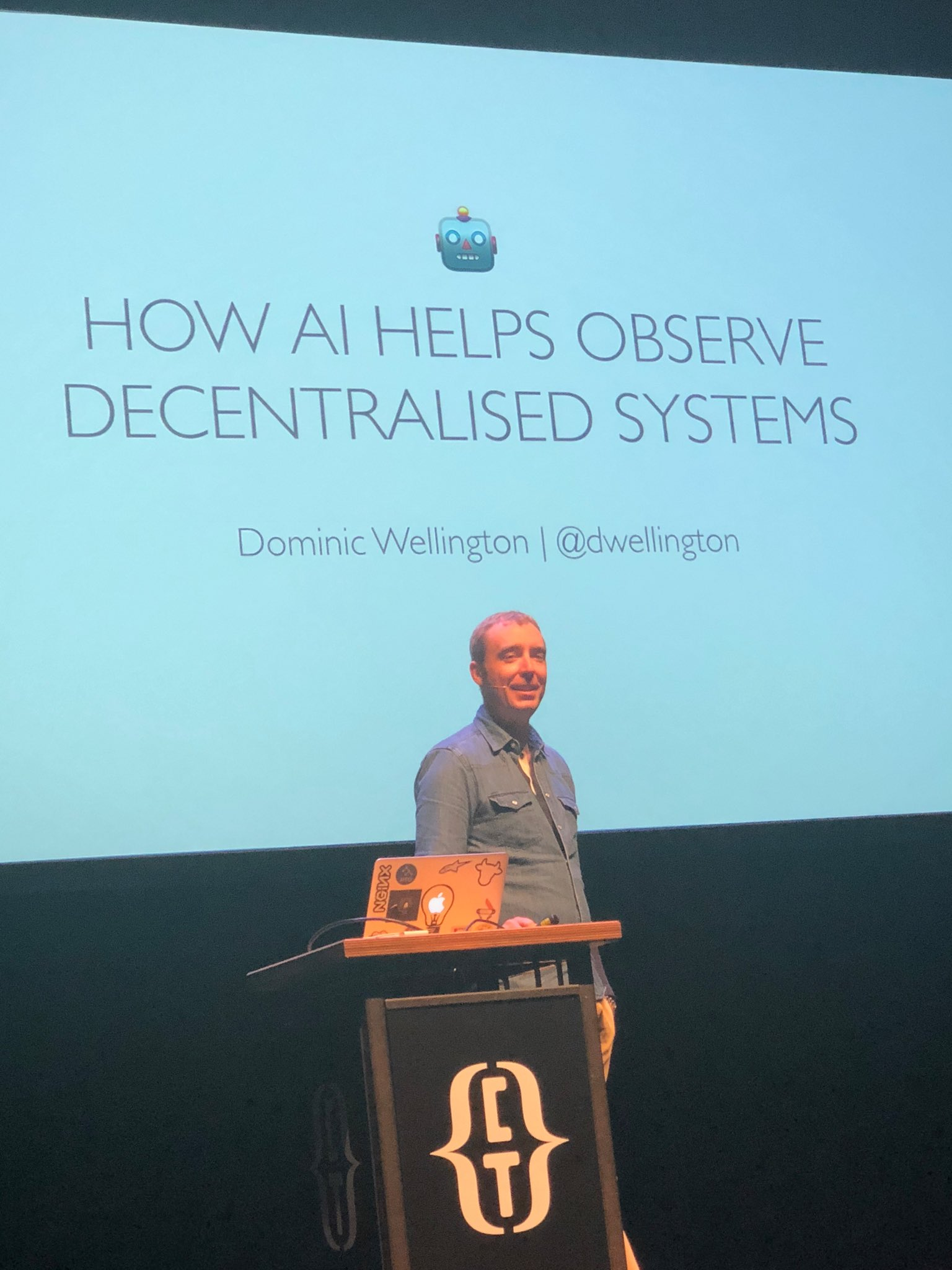 On stage at #Monitorama. All done now. Annnd breathe! 😊 pic.twitter.com/FmGQd7AdHV

In the end it seemed to go down pretty well. I did my level best (honest!) to call on my own now-obsolete experience as a practitioner and on conversations with people who are more current than I am with the nuts and bolts of modern IT, rather than relying on the crutch of vendor boilerplate, and I think I was mostly successful in that.

If you are working for a vendor and considering submitting to the Call for Papers at this sort of event, whether it’s Monitorama, DevOpsDays or Config Management Camp, I would definitely suggest test-driving your content as widely as possible. You probably have a lot of subconscious reflexes as a speaker that are not appropriate for the sort of audience these events attract. Even when you are conscious of them, it’s hard to eradicate them completely, but do your best.

In the other direction, while I have enormous respect for the technical level of Monitorama attendees, some of them seemed to be at risk of losing track of the big picture. I would not want Monitorama to change its character as a techie’s conference, but I am grateful that we had a few presentations outside that mold, and I hope that I was able to provide some context for how all the wonderful technology gets used out there in the big bad world.

No matter where you are in your hybrid cloud journey, security is a big concern. Hybrid cloud security vulnerabilities typically take the form of loss of resource oversight and control, including unsanctioned public cloud use, lack of visibility into resources, inadequate change control, poor configuration management, and ineffective access controls ... Read More
« DevOps and the Dark Pools of Security Technical Debt
Sigstr Secures $4 Million Investment Led by Edison Partners to Fuel Growth of New Products and Market Expansion »