Ansible is an IT automation engine, and a trouble-free model-driven configuration management and command execution framework. Made for multi-tier deployments, it designs your IT infrastructure by describing how all of your systems are interrelated instead of just managing one system at a time. Written in Python, Ansible does not use any agent. It makes uses the SSH server on the target, and no additional custom security infrastructure is required, making it easy to deploy.

Ansible comes up with following uses:

How is it different?

Ansible is a configuration management, deployment and an ad-hoc task execution tool, all in one. It does not require daemons or any other software to start the remote machines’ management. Since it uses the SSH, it easily passes a security audit, and can be used in places resistant to run a root-level daemon with a custom PKI infrastructure.

The Ansible modules can be written not only in Ruby or Python, but in any language efficient enough of returning JSON or key. In this way, Ansible manages to sidestep the popular Python vs Ruby language war, and is of interest to people who like both or neither of them. 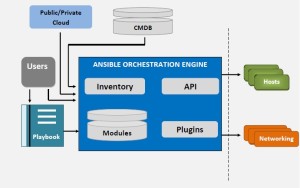 Coming with a simple framework, Ansible connects with your nodes and pushes out small program termed as Ansible Modules, which are considered to be the workhorse of the system and are responsible for performing all heavy liftings. These programs are written to be resource models of the anticipated position of the system. Thereafter, Ansible carries out these modules upon the SSH by default and eliminate them when finished.

Without using servers, daemons and databases, your library related to modules can be inherited in any machine, thus giving the advantage of working with your favorite terminal program, a text editor, and most likely a version control system to keep a track of alteration to your content.

Though passwords are supported, the finest method to practice it is by using the SSH keys along with SSH-agent. The root logins are not required; you can login as any user. Ansible ‘authorised-key’ module helps in controlling which machines can access or which hosts. You can also use other available options like Kerberos or identity management systems.

Management of your inventory in simple text files

Ansible by default uses an INI file to represent the machines being managed. These files help in placing all of your managed machines in groups of your own choosing. In order to add up new machines, you do not require any additional SSL signing server. So by no means, there will be a problem in deciding about why a particular machine didn’t get linked up due to obscure NTP or DNS issues.

Ansible can also be plugged into another source of truth, if available in your infrastructure like drawing inventory, group, and sources suchlike EC2, Rackspace, OpenStack, etc,. As soon as the inventory hosts are listed, variables can be assigned to them in simple text files in a subdirectory called ‘group_vars/’ or ‘host_vars/’ or directly in the inventory file or, as already mentioned, you can use the dynamic inventory to pull inventory from the data sources like EC2, Rackspace, and OpenStack.

Playbooks are Ansible’s configuration, deployment and orchestration language. They can explain a course of action you want the remote system to apply, or a set of steps in a general IT process.

At a fundamental stage, playbooks can be used to manage configurations and for deployments of the remote machines. At a more advanced level, they can sequence multi-tier rollouts involving rolling updates, and can delegate actions to other hosts, interacting with monitoring servers and load balancers along the way. Most importantly, the language remains readable, transparent and is developed in a basic text language. You don’t need to declare explicit ordering relationships or write code in a programming language. There are ample of ways to organise playbooks and the files they include.

Ansible modules can be written in any language that can return JSON, such as Ruby, Python, Bash, etc,. The inventory can also plug into any data source by writing a programme that speaks to that data source and returns JSON. There are multiple Python APIs for spreading Ansible’s connection types callbacks — SSH is not the only transport possible — and even for adding new server side behaviours.

AnsibleWorks, which also sponsors the Ansible community, also produces the AWX. It is a web-based solution to make Ansible simpler, and to provide a trouble-free usage for the IT companies. It is also designed to be complete all kinds of automation tasks.

AWX permits you to regulate the access and even allows sharing of SSH credentials, without someone being able to transfer those credentials. Inventory can either be graphically managed or synced with a wide variety of cloud sources. It keeps log of all your jobs and integrate them with LDAP. It also has an amazing browsable REST API. If required, the command line tools are also available for easy integration with Jenkins.

Ansible’s simplicity and ability to decrease the complexity of other tools has made it a reliable applicant for your environment. Its foremost concern is on security and reliability. It uses OpenSSH for transportation, and the language is designed around auditability by even those who are not familiar with the program. Ansible is suitable enough for managing both small setups with a handful of instances as well as the enterprise environments.

Open source components have become an integral part of today’s software applications — it’s impossible to keep up with the hectic pace of release cycles without them. As open source usage continues to grow, so does the number of eyes focused on open source security research, resulting in a record-breaking ... Read More
« Release Management, a catalyst for DevOps
Lean Value Stream Mapping for DevOps »