Home » Blogs » Continuous Delivery » In the Application Economy, Every Company is a Software Company

Recently, I was in New York to attend the Third Annual DevOps Virtual Summit. (Yes, I had to be at a “virtual” summit in person—while it’s virtual for the attendees, it occurs in real life for the speakers, panelists and support staff.)

The broadcast took place in a small recording studio that featured a lobby adorned with autographed photos from celebrities who had used the facilities previously. Sylvester Stallone, Al Pacino and even John Stamos—complete with a full mane from the “Full House” days—were all looking down on us from the walls.

Anyway, as the speakers were introducing themselves in this lobby prior to the event it occurred to me that the sampling of speakers was illustrative of the importance of DevOps across industries. The companies participating in the event were not what you’d traditionally consider a “software business,” but yet they’d made an investment in their software development practice—recognizing the importance of competing in the application economy. It underscored the point that in the application economy every company is a software company, regardless of what industry they are in. Which is why the concept of DevOps and Continuous Delivery should be top of mind, even if your company may not see itself as being “in” the software business. Regardless of what end product your company sells, you rely on your software and applications to do so.

Take a look at the panelists and the companies they represent to illustrate this: Silvia Prickel from United Airlines. Matt McComas from GM Financial. John Hashimoto from CNN. And Kelly McCartney from Jeweler’s Mutual Insurance Company.

An airline, an automobile financing company, a news organization and an insurance company that’s been around for 100 years (literally). These are not companies that were born digital, like many of the web-based entrants you might typically associate with DevOps. Instead, these are traditional organizations that recognized the need to make a digital transformation.

And the results were pretty impressive. We often focus on speed when we talk about continuous delivery, but it’s important to remember you also can see improvements in quality. The below image was taken from the United presentation and shows the dramatic decline in production outages. 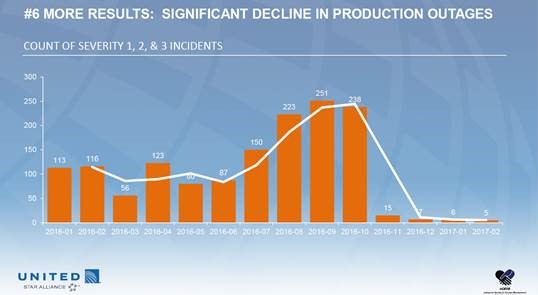 This is not to say that improvements in speed were not seen as well. Matt McComas from GM Financial spoke about how his company is now averaging 1,800 deployments per month, with each one taking just 3 to 5 minutes.

I won’t give away any more important details here. If you’re interested to find out more, I encourage you to watch the replay of the webcast: http://bit.ly/DOVSreplay