As editor-in-chief here at DevOps.com and writing for several other publications I see more than my share of contests, promotions and other marketing campaigns (not to mention pitches from PR agencies), but I came across one this week that I really wanted to share with you.  My friends at CloudBees, the Jenkins company are once again running their Breaking Builds promotion.  In case you don’t know about it, it combines two very different characters. The Butler from Jenkins and Walter White from Breaking Bad. As Sacha Labourey, CEO of CloudBees says in his blog post on the contest morphing these two together is “probably one of the best examples of cognitive dissonance you can get.”

There are prizes for several categories of captions. The categories are

The categories, prizes and full rules are also available here.

Personally my favorites of the images and captions done by CloudBees are these two: 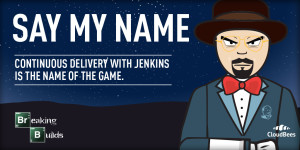 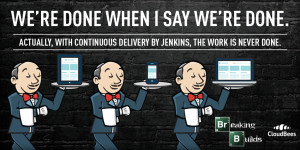 So if you are a Jenkins and/or a Breaking Bad fan why not join in the fun. Give it a try. We will also feature some of the winning banners here on DevOps.com

Open source components have become an integral part of today’s software applications — it’s impossible to keep up with the hectic pace of release cycles without them. As open source usage continues to grow, so does the number of eyes focused on open source security research, resulting in a record-breaking ... Read More
« The Top Metrics You Need to Track to Improve Operational Performance
How DevOps Eases The Holiday Shopping Experience »