The song title of Billy Joel’s 1977 hit, “Get it Right the First Time” aptly describes what DevOps teams need to take to heart when making the jump to the public cloud. But in most cases, security is lacking in the pipeline when making the shift—and a change in DevOps culture and mindset is necessary to “get it right the first time” for cloud security, according to McKinsey analysts.

It seems commonsensical to make sure adequate security protocols are extended to the DevOps pipeline before migrating to the public cloud. But in practice, statistics tell a different story.

According to analyst firm McKinsey, a full 78 percent of more than 100 firms recently surveyed are not reconfiguring their security tools when migrating to the cloud. Similarly, most security standards in place among the enterprises listed in the survey are non-sustainable for cloud networks.

“There are, of course, many security configurations for a public cloud for DevOps that need to be in place,” said James Kaplan, a McKinsey partner and cybersecurity lead. “Creating your server image in a public cloud can create many vulnerabilities [compared to in-house data centers].”

Security improvements will obviously need to be made on an industrywide scale in the near future as more companies embrace the cloud for DevOps. Currently, only 10 percent enterprises McKinsey surveyed have ported more than 40 percent of their workloads to the cloud. Within three years, that percentage is expected to jump, as 80 percent plan to migrate more than 40 percent of their workloads to a public cloud platform. 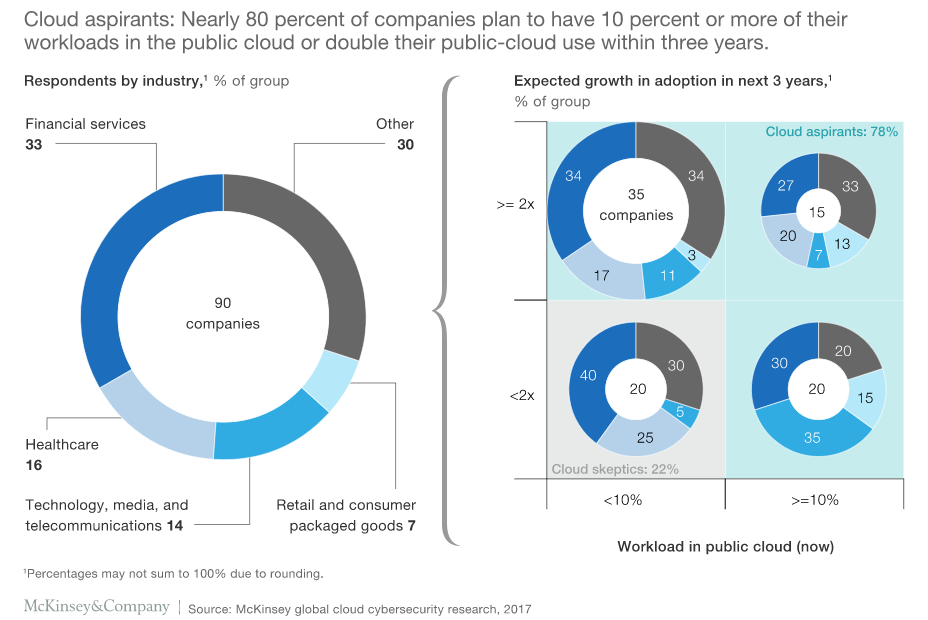 At issue is how DevOps teams’ cloud projects very often remain straddled by security practices dating back to the 1990s.

“Most DevOps security is still with a ticket-based model,” Kaplan said. “They just called Joe in security and asked him to do x, y and z.”

Porting legacy infrastructure and operations to the cloud can also be problematic. A startup, for example, might make the jump more easily than a 30-year-old Fortune 500 company with data centers located in the North America, Europe and Asia. “It’s one thing if you’re building greenfield, such as creating a video streaming service from the ground up,” Kaplan said. “It’s much tougher to go to an agile DevOps cloud platform world if you are dealing with 30 years of legacy applications, eight mergers and all that type of good stuff.”

Cloud servers can be fired up and ready to use in minutes. But it can take weeks before standalone security departments catch up. This might mean waiting on a security team to manually complete vulnerability scanning, penetration tests and firewall installation before cloud deployment. Or, in the worst case, these steps remain incomplete, leading to relatively easy-to-exploit vulnerabilities on the public cloud.

“DevOps cloud security requires particularly high levels of sophistication and capabilities, as well as agility,” Kaplan said. “There has also traditionally been less focus on speed.”

The solution is to converge security with the DevOps from the outset ahead of cloud development. In this way, security controls, reviews and deployment are integrated with DevOps, to create DevSecOps for the cloud migration process. This heavily involves developing APIs for security automation, Kaplan said.

Implementing DevSecOps also requires investments in training and culture. This consists of ensuring DevOps teams receive additional training  to ensure security is integrated into every step of development work and for developers to maintain security support once the switch to the cloud is complete, Kaplan said. Training ensures DevOps team members have working knowledge of security APIs and orchestration technologies, and are eventually able to create new security APIs for DevSecOps, Kaplan said.

The end result is that cloud deployment remains agile, as it should be. Cloud migration is done more swiftly and efficiently compared to traditional security models, once the DevOps team has acquired the security knowledge it needs, Kaplan said.

“DevOps teams really need to expand their purview to think more about security. They must create more rigor around the security services and how the developer journeys should involve security,” Kaplan said. “And they then need to think about how to incorporate those security APIs into the application scripts for infrastructure APIs, capacity scaling and what have you.”