Home » Blogs » IT as Code » Infrastructure/Networking » Distributed Data and Apps: What About Your Infra?

There are myriad, but the common thread is this: These are software-first companies in their categories. And why are they software-first? They are data-driven.

Their secret sauce is the continuous pursuit to process and extract insights from data to drive their business decisions and operational efficiencies. So if that’s the recipe, why aren’t incumbents doing it?

Data is becoming increasingly distributed in the enterprise, and for multiple reasons, including:

As a result, distributed apps and data in the enterprise typically require the following:

To address the above, there are technological and operational shifts required. Those changes can be summarized below:

What if We Have Legacy Infrastructure in Place?

To recap: Apps are changing, driven by critical business needs. ← Read above.

These changes have a significant impact on enterprise architectures in where apps run and how those apps and data are connected, secured and operated. The properties for dealing with the requirements of distributed apps and data are driving the following shifts:

Apps Have Changed. So Have the Required Capabilities for Networking and Securing Them

To summarize: There are several technical and architectural trends (driven by business needs) around the types of applications, their locality and the means of how they are delivered/accessed. As they converge, it is creating major challenges for traditional networking, security and app services infrastructures.

Why Today’s Infra Is Obsolete for Modern Apps

When it comes to distributed apps and the need to process distributed data, traditional networking and security tools (and their operations) are unsustainable.

Legacy application delivery controllers or ADC (aka “the modern load balancer”) were designed to efficiently and securely deliver web-based monolithic apps directly to end users with the highest performance possible. They were:

Don’t believe me? Let me give you a real-world example to help calibrate where I’m coming from.

Above is an example architecture of an auto manufacturer looking to retrofit its existing and planned electric vehicle (EV) stations to collect HD mapping and process it at scale.

Let’s analyze the workflow and requirements:

There were multiple options and proposals put forward, insourced through various teams or outsourced through system integrators. Below is an example of one of those proposals:

I’ll let someone else make the TCO on why the above is a nightmare (or this can be a topic for another post), but let’s assume for a moment you find a business model that actually works in your favor because you have an army of lawyers to make sure the vendors (the ones with deep pockets) bear the burden. But is this really a positive outcome for your business, employees or customers?

A new generation of infrastructure platform (aka “modern”) is what’s needed for networking and securing modern apps, and it must be more app- and API-centric than your traditional ADCs. This is similar to how ADCs were an evolution of vanilla L4 load balancers over a decade ago.

Here is a potential list of things to look for as you begin researching a modern infra stack and service for app networking and security: 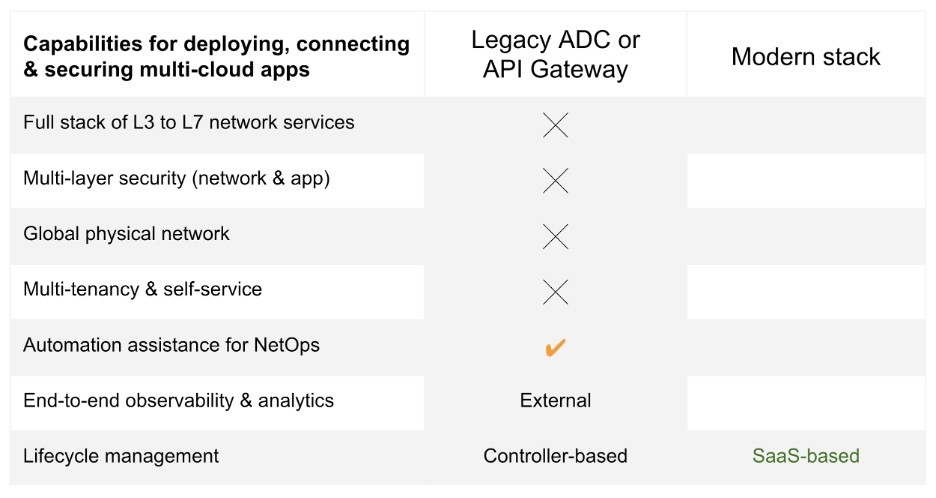 Open source components have become an integral part of today’s software applications — it’s impossible to keep up with the hectic pace of release cycles without them. As open source usage continues to grow, so does the number of eyes focused on open source security research, resulting in a record-breaking ... Read More
« Winning DevOps in the Finance Industry
Dell Launches Project Apex to Deliver IT as a Service »