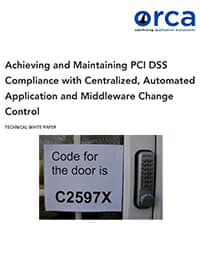 Many organizations are already PCI DSS compliant. Then something changes. Often the change is small and seemingly innocuous such as a configuration update to a web based application or middleware. Perhaps a configuration setting drifted and it needed to be reset. Perhaps IT Operations wrote a PowerShell script in order to deploy a configuration update across multiple servers. In the process of deploying that intended change, that well-meaning IT Operations employee inadvertently caused an unintended change as well, one that opened a security vulnerability. Changing this broke that.

This complementary eBook is offered by Orca.