I’ve been involved in software delivery for longer than I care to admit, and since DevOps has come onto the scene I’ve witnessed the deconstruction of silos that were once actively built to contain separate projects and team functions. Central to this deconstruction is collaboration between Dev and Ops, ushering in new innovation paradigms. What’s exciting is that in just the past five years since DevOps has started permeating organizations, other areas within the enterprise—including technical and marketing teams—have started to recognize the high-value that comes from embracing collaborative tools and processes. DevOps has quickly evolved from sideline projects to a state of mind rapidly adopted by leading companies across various business units.

Accompanying this notion of greater collaboration and cross-silo participation is the need for new tools to help facilitate the pace of change and collaboration. Although there are no silver bullets, you can take steps and implement technologies to help make the odds of success more favorable.

Before DevOps, hostility between Dev and Ops teams was not unusual. Dev and Ops had conflicting goals: Development to introduce change and Operations to maintain stability. The common bond was a love of technology rather than delivering quality products to customers. In my experience, technology employees care more about the technology they can experiment with than the value something they’re working on brings to customers. However, in the five years that DevOps has been on the scene, those of us who follow DevOps closely have noticed staff on both sides becoming much more customer-focused.

Many organizations publish their core values and say that they expect employees to live up to those values. But are those values something that employees are measured against? In my experience, they are not. Organizational values tend to end up being words to make people feel good. But what if every manager in an organization had a common goal of delivering quality products or services to customers, with the goal defined in a measurable way? Then everyone in the organization contributes to delivering the products to customers. It’s a goal is not and should not be department specific.

The departments that often see considerable delays due to red tape are:

Any one of these departments can result in projects getting stuck in the mud, usually due to large amounts of lead time required to fulfill a request.  Delivering quality products and services frequently obviously doesn’t mean having no process, but when things need to be done quickly, procedures should be flexible enough to accommodate such requirements. The need for agility applies to all parts of an organization. It’s not just a technology problem.

Consider trying to hire someone new to work on a project. Adding an employee could involve HR, Finance and Procurement, each with their own processes and requests for lead time. The multitude of steps in their respective processes frequently take weeks, if not months. This applies to almost any department of the organization and it’s highly likely that there are processes that add significant delays to reacting to business needs.

Setting common goals and measurements is a sure way to cut red tape. Employees don’t want to be the reason something could not be done. Processes will become streamlined and departments will collaborate out of necessity, if not for the good of the organization, then at least as an act of self-preservation.

While this high-level overview makes it sound simple, most organizations outside of Silicon Valley don’t set common goals for employees. It’s up to the Unicorns to spread the word.

The DevOps movement resulted in advances in tools and technologies that aided in Dev and Ops collaboration, and took advantage of the opportunities created by this frictionless new environment.

In order for all departments in an organization to be able to take advantage of similar opportunities, other teams will need to look at ways to optimize their workflows and tool chains.

One area where tools have reduced friction and increased collaboration is code review. Code review has a lot in common with collaborating on any other kind of content. Code review used to be done with people sitting in a room with printouts of source code receiving feedback that often resulted in holy wars about coding styles. It wasn’t effective and that was even within the same department.

Tools now allow documents to be reviewed asynchronously with in-line comments, no matter where in the world the reviewers are located. It’s one of the few examples where communicating via text rather than voice lowers tensions, which is surprising given how easy it is to accidentally upset someone via email!

A great example of this is how my working style changed once I started working with Gene Kim, the award-winning author of The Phoenix Project: A Novel About IT, DevOps, and Helping Your Business Win and The Visible Ops Handbook. Rather than email documents back and forth, we’d collaborate via Google Docs. No matter what our schedules were or where we were in the world, we worked together effectively. The first time I worked like this with Gene changed the way I think about collaborating on non-technical content.

A key element of collaboration on a single set of artifacts is not having multiple copies in different systems in an organization. In fact, the 2014 DevOps Survey by PuppetLabs found that versioning production artifacts in one place was a key indicator of high-performing organizations. Imagine being able to store all artifacts involved in a project–Including requirements docs, marketing campaigns, and spreadsheets–In a single location accessible via tools that fit your needs. Collaboration, passing audits, applying for tax credits, and disaster recovery would be so much easier.

We’re not there yet. As mentioned, tools such as code review, Google Docs, wikis, version control systems, and email all help with collaboration but they are often still silos of information. Just as breaking down silos between teams has been revolutionary, breaking down the walls of data will one day have an equally profound impact. 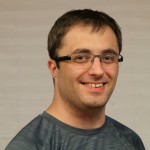 Before joining Perforce as a Technical Marketing Manager focused on Continuous Delivery and DevOps, Jonathan Thorpe held technical marketing roles at CFEngine, Serena, and Electric Cloud, where he specialized in DevOps culture and automation technologies. In his spare time you can find him reading, playing with all of the current video game consoles, dabbling with mobile software development, and playing with the Raspberry Pi.