The general public often thinks about software development in terms of a lone software developer hacking away tirelessly at their keyboard. Of course, that is an anachronism, at best. What is true is that collaboration among software engineers, especially with their colleagues in IT operations which evolved into DevOps, has become the norm for rolling out better code faster.

We are on the cusp of the next big evolution as software development becomes more of a ‘team sport’ than ever before. Now, collaboration is extending beyond IT (developers and operations) to cross-functional areas across various business teams. Product development, marketing and others also are providing input and feedback into the software development process and, most significantly, becoming part of the process.

Historically, software programming, including front-end programming, happened in local IDEs. However, the rise of modern front-end web frameworks has led to an entire class of developer tools that speed up the build process and allow applications to be deployed more quickly.

There are a number of front-end frameworks that do this: Netlify, Vercel and Appsmith, an open source internal app builder, are three examples. These tools are getting widespread adoption, because, in a world where front ends are becoming more complex, they make things like hosting, deployment, authentication and serverless functions much simpler. The other reason for adoption is also because many of these tools are built on top of popular open source frameworks such as React, which already has a vast user base.

This is enabling a new kind of collaboration that is unlocking a lot of value for all the stakeholders involved. Inspired by how Figma reshaped the design process by allowing real-time commenting back in 2016 or how Google’s suite allowed real-time editing, there is a similar phenomenon taking place over the last year in software engineering.

Visual, Real-Time and On the App

The most obviously striking feature is that collaboration is happening on the app (or the app prototype) and is becoming increasingly visual. Writing or editing code in the command line is great, but it doesn’t necessarily help the developer to visualize what is happening. Vercel’s Next.js Live, for example, allows teams to chat, draw and edit. 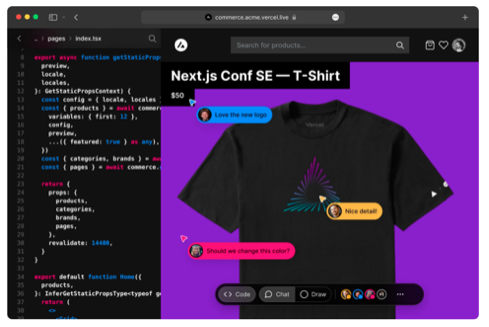 This also means that collaboration is happening on the app instead of through tools like email, Slack and Jira, leading to targeted feedback without having to toggle between multiple tools.

While developers often collaborate at the code level, non-developers’ feedback is often given at the design level. This is more often the case for internal tools (or apps), which typically account for anywhere from 20% to 40% of engineering bandwidth in organizations.

For example, Appsmith today has thousands of developers self-hosting and deploying internal applications for users who are often business or operational teams like support, sales and/or finance, for example. Often, these business users don’t even know who has built the application. Real-time commenting via front-end frameworks facilitates collaboration between software engineering teams and their business counterparts who can now communicate directly, provide feedback and collaborate with their engineering peers. This close collaboration empowers all parties, increases efficiency and saves significant time while improving the overall quality of the software and ensuring that it meets expectations. 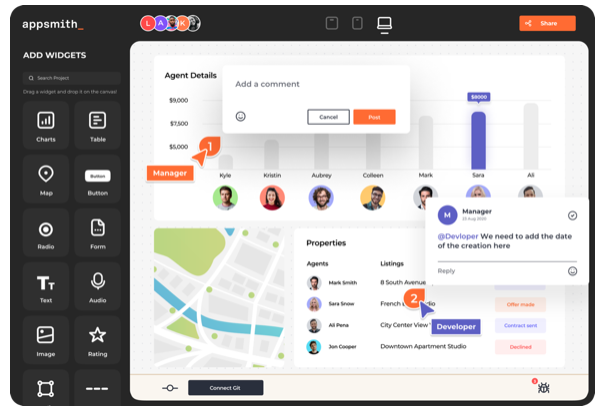 In addition, non-engineers don’t need to familiarize themselves with a new tool like GitHub or go through a painful replication issue on Jira involving a variety of screenshots or screen recordings. Sharing feedback can be done much more easily.

For developers, having the ability to visualize a particular branch of an application and give detailed feedback on it and then track it on GitHub or GitLab speeds up the development cycle. Netlify, for example, pioneered this when it launched Deploy Previews earlier this year. Netlify takes this feedback and integrates it into project management tools like Jira, Trello and many others in addition to GitHub and GitLab.

We are seeing other companies, like Sturdy, building on this much-needed trend of real-time collaboration in app development.

Collaboration is the Trend

Great software is the story of teams expanding collaboration beyond developers and there is a lot of good tooling available to help achieve that. This trend should continue to gain traction in the years to come because it taps into a number of other underlying trends in the software development space.

First, the explosion of alternatives in the backend-as-a-service space, in which Heroku and Firebase were early pioneers, means BaaS is embraced by many more organizations for a variety of use cases. This trend speeds up development because they present a much more tightly integrated ecosystem of services and organizations don’t have to worry about deployment, hosting, content delivery network (CDN) and/or authentication themselves, for instance.

Second, the proliferation of APIs is driving the emergence of more complex applications built on a variety of data sources. Everything is connected to everything. Of course, this also means that a lot more data is available to support decision-making, and this leads to many different kinds of applications being created both for external as well as internal purposes.

And finally, the larger low-code/no-code movement is creating millions of new citizen developers and blurring the boundaries between who is and isn’t a developer.