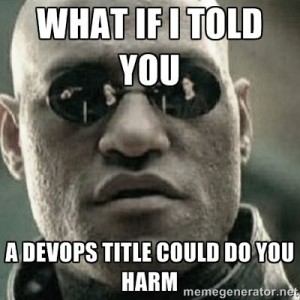 This post was originally published on my personal blog in May 2013.  But I think this topic is important and wanted it to be my first contribution to DevOps.com

I used to be Director of DevOps…twice. Both times, I changed my title later. I even ran a DevOps team…although the team was already called that when I took over.

I have fallen victim to the the abuse of the DevOps title, and I see it all the time. In the DevOps twitter hashtag, people contacting about DevOps job opportunities…it’s got to be a real thing, right?

I mean, we totally have people that are doing DevOps these days, right?  I know that I can find all kinds of job descriptions for DevOps Engineers from many types of companies.

But, there is one very important reason why you might want to think twice before using “DevOps” as part of your job title.

My friends (rightfully) give me grief for the fact that I self-assigned my title at Dyn to be the Director of DevOps (I still feel bad about it). I really hate job titles in general and this is what happens when you don’t care about what your title is.

How the story goes is that when I received the offer from Dyn, my original title was Director of System Automation and Release Engineering. Since I was pretty sure that wasn’t going to fit on a business card, I took the job and asked that we change the title later. Fast forward a month, as after talking and trying to formulate my job description & title for about 20 min, I say simply enough, ”F this. Just call it DevOps, I’ve got other things to do.” I was far too busy to really care much about an arbitrary title.

Fast forward a few weeks to Monitorama, and I was chatting with Mike Rembetsy. After talking for two minutes about how the new job was going, he said, “Oh, that reminds me, you need to change your job title. It’s terrible.” I tried to convince him for about three more minutes, mainly trying to express to him that it doesn’t matter. He then dropped the knowledge bomb that gave me the aha moment.

When you are the Head of DevOps, you “own” DevOps. If DevOps fails, it is your failure, when it should be a failure of the entire company to change, adapt, and accept the cultural shift.

That is the major problem with being the “head” of DevOps, or the “Director/Manager/VP/etc. of DevOps.” If DevOps fails inside your company, it’s a really easy way for the executives to say “Well, you are the head of DevOps so obviously it failed because you failed.”

The reality is that DevOps is a culture that should be accepted by every facet of your organization. Everyone needs to embrace the changes of a DevOps culture, and there can not be a single owner of it.

Soon after that conversation, I relaunched my team and title in general to be the “DevTools Team” (a brilliant Etsy recommendation). The more I thought about it, it accurately describes the work that we do. We build the tools needed for Developers (and Ops/QA/NetSec) to spend more of their time writing code, and less time dealing with distractions.

I know some people want to have a DevOps team, or want to call their team the DevOps team. Jez Humble wrote a wonderful blog post last year that I highly recommend that you read. He summarizes that there are scenarios that a “DevOps” team label works, and I do agree with what he says. But don’t just label a team DevOps, assign a new Manager of DevOps and wonder why three or six months go by and things are still bad. Things are still terrible because all you did was change a team name, or give a brand new team a name, or in some cases , just created a new silo called the “DevOps Team Silo”.

Well, what am I supposed to call myself?

Here are some of the examples that came up during the Open Space:

I don’t know why recently there is a need to move away from the same job titles we’ve used in the past, as if there is some negative connotation towards them. It’s not that the jobs have really changed much; it’s that we’re just getting better and more efficient at doing them with the tools at our disposal. The tools have grown so quickly, it has enabled us to be much better at our jobs, but only if you are willing to learn something new.

In the end, titles really don’t matter very much, and they shouldn’t matter much. But they can actually have a more powerful (negative) impact internally by making you the owner of a culture that should be accepted by everyone. But there is one point that I believe is so important it needs to be repeated:

If DevOps fails, it should be a failure of the entire company.

Check out my talk “How to Keep the People You Need,” where I discuss recruitment and retention of your hard to fill positions. Also check out the panel on DevOps with Twitter’s Rich Paret from Dyn’s Geek Summer camp.

Open source components have become an integral part of today’s software applications — it’s impossible to keep up with the hectic pace of release cycles without them. As open source usage continues to grow, so does the number of eyes focused on open source security research, resulting in a record-breaking ... Read More
« Security Policies For DevOps 101
Hello World »