It’s easy to understand the current disillusionment around the term “digital transformation,” as it has been thrown around vaguely as the ultimate answer to business innovation without much recognition of the nuances of technological change.

When it comes to mainframe systems, the issue here most likely can be traced back to the word “transformation.” The perceived challenge inherent in the transformation of a vital business process is that it involves a paradigm-shifting, instantaneous “big-bang” overhaul of IT, with no recognition of the complications involved in modernizing a complex web of intertwined systems and data.

It is this perceived challenge that has seen large enterprises reluctant to change and modernize legacy technology, as the pressure to throw out the old and bring in the new is seen as simply too risky. Horror stories, such as the infamous failed IT upgrade at UK retail bank TSB in 2018, have dampened the spirit of many enterprises to modernize with the perception that a big transformative leap may be required.

Many businesses seek a solution to this “all or nothing” conundrum and would benefit from modernizing legacy IT in small steps—carefully considering the modernization of infrastructure and applications as separate processes. This more graceful approach delivers gradual benefits while reducing risk and acknowledges that modernization is a continuum, not a destination.

What is the Reality of a Modernization Process?

There is mounting pressure to integrate mainframe applications, which house critical business processes with these approaches. The aim of this modernization is to enable legacy applications to take advantage of the innovations spearheaded by the modern world of open source—and, therefore, respond more rapidly to the needs of the business. To achieve this, organizations would benefit from a two-phase approach:

The foundation of infrastructure modernization is the movement of legacy applications, written and compiled to run on the IBM Z mainframe, to the Linux operating environment running on x86 architecture computer, either on-premises or in the cloud. Using conventional methods to re-host these legacy applications into x86/Linux requires all programs that make up a legacy application to be recompiled and, in many cases, changed. This approach has often resulted in budget overruns and a high risk of failure.

If an organization is able to move these applications and data to a modern environment without the requirement for recompilation or reformatting, this migration risk is significantly reduced.

Once moved to a Linux environment, and despite remaining in original languages, these applications can now benefit from a vast array of tooling to optimize their ongoing exploitation. They can take advantage of cost-effective scaling options, modern monitoring, high-availability tools and many other facilities available on Linux on x86. For those legacy applications that continue to be maintained, modern development environments are now available, meaning their management is no longer restricted to a diminishing mainframe workforce.

The goal of many companies is to have their entire application portfolio based on modern languages or packages. Where legacy applications are concerned, attaining this means converting the individual programs from COBOL or PL/1 (and, in some cases, even more arcane languages) into modern languages such as Java. In so doing, an organization can tap into much larger pools of development talent and tooling. Furthermore, the door to an entire world of open source innovation is opened, which alters entirely the trajectory of application development for these legacy applications.

Yet modernizing mainframe applications in this way, using conventional methods, is not a process to be taken lightly.

Infrastructure vs. Application: The Chicken or the Egg?

Of course, the organization could attempt to first modernize the applications in place. At a glance this method may seem the least disruptive, but very quickly the effort would run into many of the challenges previously highlighted that have caused the mainframe to be abandoned as a contemporary platform for application modernization. Using a modern programming language such as Java is one way to enable modernization with those programs being completely rewritten. With the whole process conducted on a legacy mainframe, costs and resource contention become practical issues. Organizations that run mainframes carefully control access to mainframe resources due to the punitive costs of exceeding licensed capacity; indeed, this resource contention point is another reason for companies to move ongoing development off the mainframe.

When taken collectively, it is easy to understand how these factors have conspired to thwart most modernization initiatives that choose to modernize applications first. By modernizing the infrastructure first, the issues identified above are circumvented.

Once mainframe applications and data are re-hosted on modern, open environments on x86, Linux and the cloud, the real process of application modernization, as outlined above, can begin.

The modernization journey is not easy, but continuing to depend on a declining skill set and diminishing vendor community in the mainframe world is no longer an acceptable alternative. By breaking up the modernization journey into manageable pieces, moving forward over time to the desired end state is the most realistic approach. After all, to quote a Chinese proverb, “A journey of a thousand miles begins with a single step.” 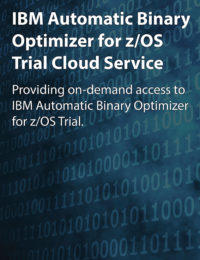