how do we do a better job of building and operating socio-technical systems?
Recent Posts By Chris Corriere

The last half of 2017 was pretty amazing. I wrote a brief post about the Inclusive Collaboration Summit I attended in London last July. Sallyann Freudenberg and Katherine Kirk started this campaign to raise awareness around neuro-diversity in tech. With respect toward the silence experiments I kept my original post very short. It was great to participate in the silence experiment in London and to help Sal and Katherine with their workshop in Orlando after I returned to the United States, but that’s not the whole story. I offered to facilitate a Wardley mapping workshop while in London in an effort to help the Inclusive Collaboration Campaign form a strategy.

Coincidentally, enough I also ended up helping Simon Wardley organize the first Map Camp in London last year. While I didn’t get a talk accepted into Lean Agile Scotland and wasn’t expected to speak at Map Camp either, I decided to make the trip back to the UK in October to attend both events as a volunteer. It’s great to get a chance to speak at conferences but I think it’s important to occasionally show up in another capacity as well. I’ve even gone so far as to buy a ticket and show up at an event as a garden variety attendee.

Both of these events were the same week in October, with Map Camp right in the middle of Lean Agile Scotland. In what one might consider a lapse of judgment, I decided to spend that week traveling between Edinburgh and London on planes, trains and automobiles. Due to a speaker cancellation at Map Camp, I was able to give a short presentation on the mapping approach I used for the workshop at the Inclusive Collaboration Summit earlier in 2017. I also helped Sal with a workshop on sensory perception in Edinburgh. Simon was running a mapping workshop on the last day of Lean Agile Scotland as well, so we had a bit of a race from England to Scotland. He left on a sleeper train right after Map Camp while I took a plane out the next morning. Simon ended up beating me there and I owe him yet another cup of tea. Still, I somehow managed to make all my flights and appointments while I was in the UK, but I didn’t have much time to take in any of the scenery while I was out of town. 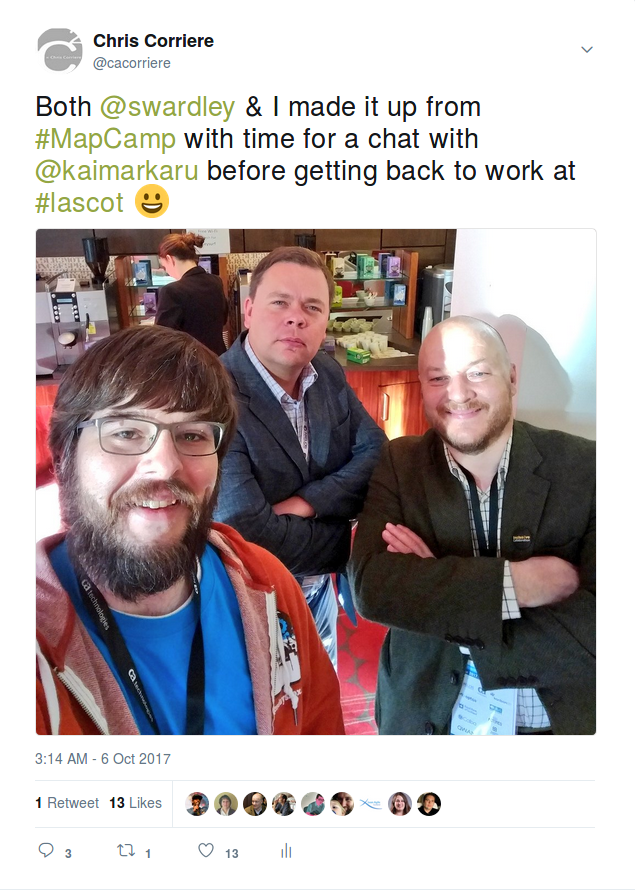 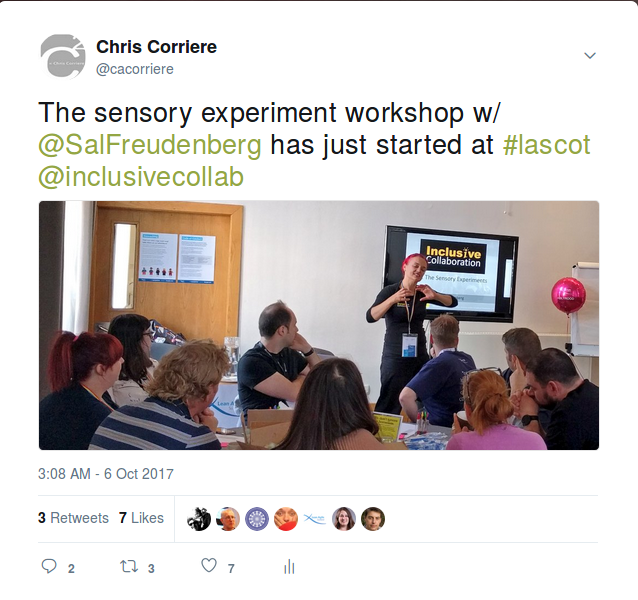 At some point I accounted for this and booked a seat in the quiet coach on a train back to London from Edinburgh. I knew I’d be exhausted and would need some down time to decompile before heading back home. As the train left the station, I crossed off my last checkpoint for the trip and tried to relax a bit before flying back to the United States. As with any journey, this last checkpoint was an appropriate time to pull out the maps from the ICC workshop in London to see how we were doing and what might be next. 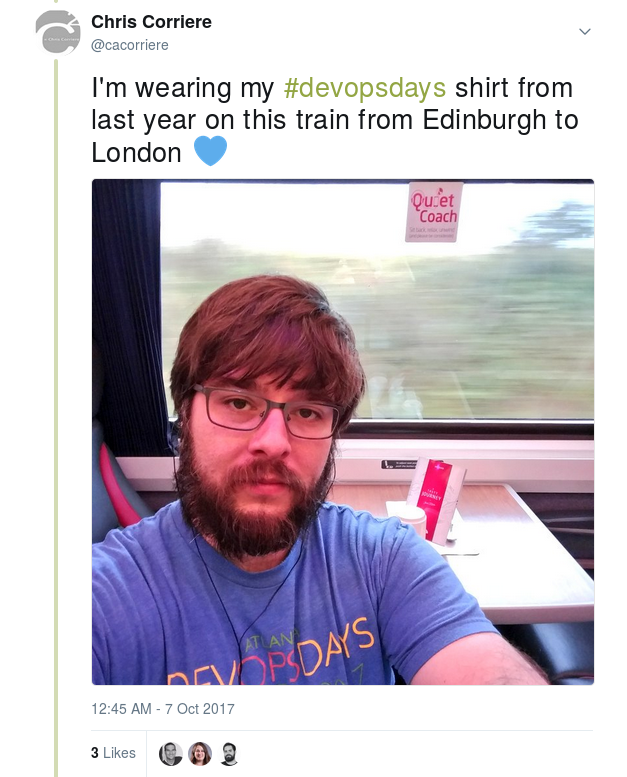 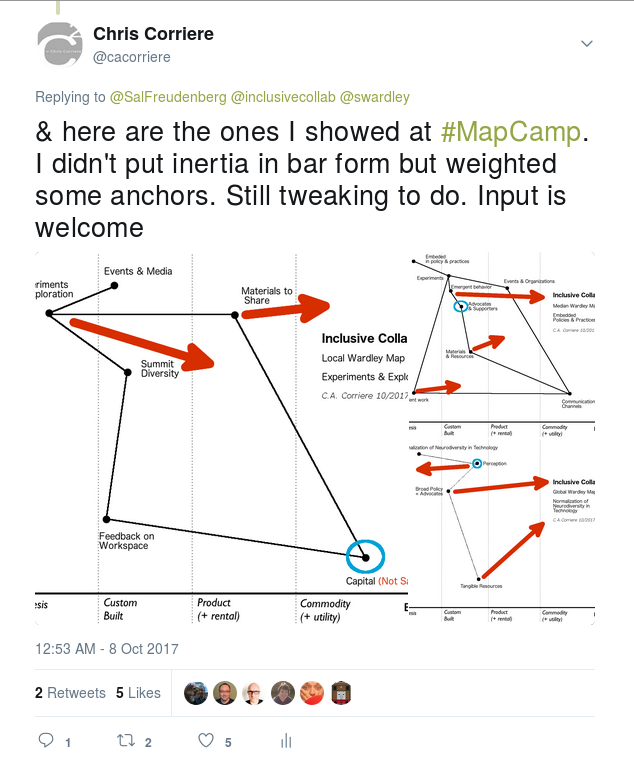 Diversity and inclusion are a common conversation in tech these days. They remain a priority at Map Camp as well, which is why we had a pool of diversity tickets reserved and did our best to include as many folks from different walks of life at the event as we could. Diversity and inclusion can and should be improved continuously. If you can’t take my word for it, then maybe this compilation of G.I. Joe public service announcements will convince you. Like Gung Ho says, “Don’t judge people until you give them a chance!”

Simon got right to planning the next Map Camp as soon as he left London for Edinburgh. I wanted to jump right back in to Map Camp, too, but hosting an Inclusive Collaboration conference was a stretch goal that came out of our mapping session in July, and I had devopsdays Atlanta 2018 to think about as well. The least complicated thing I could do was make Inclusive Collaboration the theme for devopsdays 2018, so that’s exactly what I did. I was geeking out about trains at the time, so of course devopsdays Atlanta will have a train theme this year as well.

The train theme is more relevant than you might think at first glance. Trains, like any technology we have, are part of a larger socio-technical system. If your system doesn’t have any people in it I’d suggest taking a step back and trying to look at the bigger picture. Of course, you can look at just the train from a purely mechanical perspective, but cutting out the societal impact of expanding travel options and connecting people, not to mention the social impact the construction and operation of railroads had on so many communities, really understates the global impact of the technology. I looked for songs about trains to listen to on the way back from Edinburgh and was amazed at not only how many there were, but how many different decades, genres and cultures were represented in the list. I found this list of about 1,000 train songs, but even the article admits the set is incomplete and the total number of songs about locomotives is likely uncountable. The fact that we’re still writing songs about trains today really goes to show the permanence of the impact railroads have had on our human race.

The DevOps community is adamant that DevOps isn’t about the tools. We’ve also heard time and time again that containers will not fix our broken culture. I had a long chat with Simon while in Edinburgh over his concerns that the community is about to make the same mistake again with serverless technology. No, serverless isn’t going to fix our broken culture, either. Similar to trains, it’s time to zoom out on the technical details so we can bring the social impact of modern computing into our frame of reference.

This isn’t news, but like the title of the post says, knowing is only half the battle. We have to actually get off of our asses and try to do something about it if we want anything to change. I’m glad to have Sallyann Freudenberg traveling from England to Atlanta this April to deliver a keynote. I’m glad Jamie Knight and his friends, Lion and Mike Southgate, will be in town from London to spend some time with us in Atlanta, too. I’m excited to hear what Atlanta’s own Kim Crayton, a technologist with a background in special education, will bring to this conversation as well.

I don’t have any silver bullet answers for the social issues we’re facing in tech today and I doubt we’ll get things sorted in Atlanta this April, but I do know we’ve got some very well-qualified individuals showing up and there will be a lot to learn over the course of two days. Cloud computing, CI/CD practices and the typical tech content seem like known, solved problems to me by comparison, but we’ll be sure to have some folks talking about these topics as well. It’s not a question of social or technical, but rather, How do we do a better job of building and operating socio-technical systems?

In addition to Map Camp 2018 this October, there may be an Inclusive Collaboration Summit in London later this year. The details on both of those events are still getting sorted out. What I do know for sure is you can join us in Atlanta this April and I sincerely hope you can make it. Early bird tickets are still available and our CFP is open until March 1. Please join us.