Kuma and OPA are both being developed under the auspices of the Cloud Native Computing Foundation (CNCF). Kuma, unlike other service mesh offerings, provides connectivity across both microservices-based applications running on Kubernetes platform and monolithic applications deployed on virtual machines. 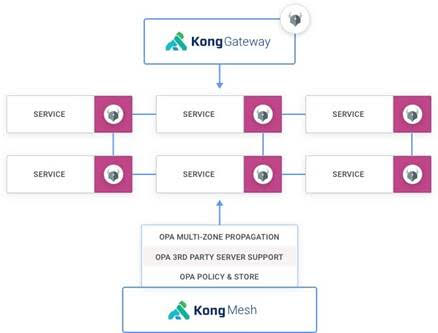 Like the Istio service mesh, advanced by Google and IBM for Kubernetes environments, Kuma is based on open source Envoy proxy software. In contrast, however, Kuma is both lighter-weight and designed to span both cloud-native and legacy application environments.

Marco Palladino, CTO at Kong, said OPA support will be a significant advance for both classes of workloads as organizations start to employ Kuma within the context of zero-trust computing environments. As DevSecOps processes are extended to include managing compliance as code, OPA will provide a programmable mechanism for ensuring that policies are not only properly implemented, but can also be easily audited, Palladino said.

In general, an effort led by Kong, VMware and others to elevate the service mesh conversations to more broadly address application connectivity is underway. A service mesh, at its core, provides the means for integrating hundreds of application programming interfaces (APIs) at scale. It also provides a level of abstraction above the network layer that makes it easier to connect applications across a heterogeneous networking environment.

Kong is making a case for a lighter-weight approach that spans multiple platforms and is highly extensible. As such, third-party vendors and IT teams can add extensions to Kuma as they see fit.

Ultimately, Palladino said, the time has come to take cloud computing to the next level. If all organizations wind up doing is lifting and shifting monolithic applications to public clouds, an opportunity to advance the state of IT will have been lost.

Of course, it’s still early days as far as adoption of service meshes are concerned. Most organizations today are relying on API gateways, proxy software or ingress controllers to manage APIs. It’s not clear to what degree a service mesh may remove the need for some of that existing application connectivity middleware.