Attendees of Rugged DevOps Connect at RSA packed Moscone West’s second floor Feb. 29 to immerse themselves in security. Among the presenters of the daylong event was Forrester analyst Amy DeMartine, who provided a tutorial on how security, developers and operations folks can work together better in the new DevOps world.

Through a slide show, DeMartine laid out her Seven Habits of Rugged DevOps, three of which are discussed in this column: 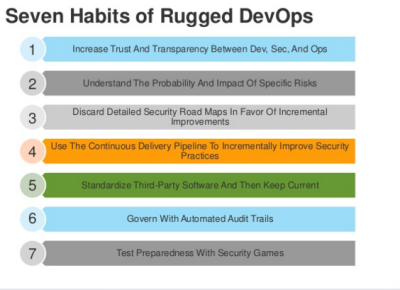 1: Increase Trust and Transparency Between Dev, Sec and Ops

We live in a world where technology’s goal increasingly is to automate everything, with less reliance on humans—at least, that’s what many marketers would have us believe. However, DeMartine emphasized that Security and Risk groups, if they are going to play a key role in DevOps, need to speak to the practice’s true owners—App Dev and Infrastructure and Ops—in a language they can understand. Here, it’s not automation that matters most. It’s communication—among actual human beings—that’s paramount.

She emphasized a real disconnect between these groups, with AppDev being perceived as the department of “Anything Goes,” Infrastructure and Ops thought of as the division of “No,” and Security and Risk seen as the “Persistent Nagging” sector. 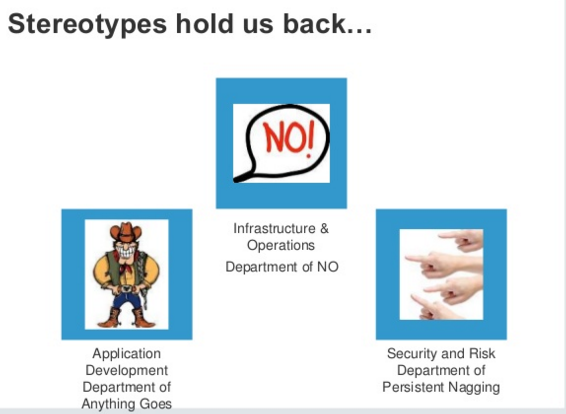 Imagine for a minute, a family unit comprised of Mom, Dad and a highly motivated teenager. The teenager is fast, full of energy and always pulling the trigger; Mom is pragmatic, a disciplinarian always having to tug at the teenager’s reins; and Dad is constantly frustrated that no one listens to his determined warnings. The family’s living room is the scene of many “heated” debates, where each side scores its share of wins but there are really no common agreements that satisfy everyone’s needs. When the teenager wins, it’s because Mom simply doesn’t have the energy to resist any further. When Mom wins, the teenager turns on the iTunes, plugs in the headphones, withdraws and possibly even starts searching for a new family. Dad’s victories are often followed by a series of door slams and the silent treatment.

Now imagine if the three sides found a common language? One that not only got each to see the others’ viewpoints but also developed a system where the teenager was set free to operate within defined boundaries, and where he or she even wore enough safety gear to keep risk to a minimum. We’d have a much more harmonious place, one where the teenager continued to grow without risking the family ship.

Interestingly enough, there really isn’t any technology available that addresses this very real human communication challenge. No mater how counter intuitive it may seem, an effective Rugged DevOps environment is highly dependent on human-to-human relations.

The U.S. Office of Personnel Management (OPM), Sony, Hollywood Presbyterian, Anthem—each of these organizations experienced a security breach of massive scale. If these breaches all shared a word in common it would be PANIC—or at least headlines would have us believe this. The OPM breach was the ultimate example, wherein almost as soon as the alarm bell rang the government announced an elaborate plan followed by the big “Sprint.” Although, it might have been wiser just to beef up phishing defenses (smiley face).*

It turns out that a detailed long-term plan may not be the answer to data breaches, ransoms and system shut-downs.

DeMartine said outright that a comprehensive road map for addressing threats should be discarded in favor of a vision for real-time measurement and incremental improvements. Below is the “circle of life in security and DevOps,” as envisioned by DeMartine: 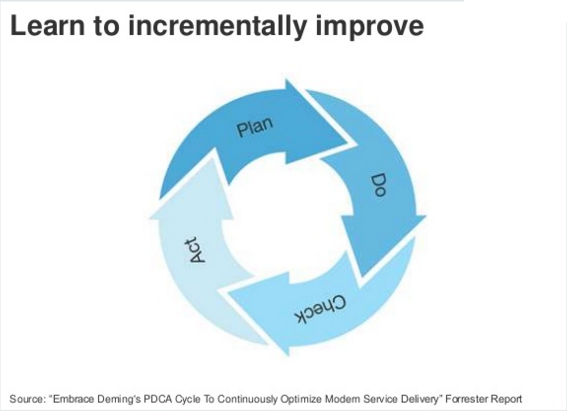 Who doesn’t like competition? Not many. I think security folks and hackers are probably some of the most competitive people around; visit a Black Hat conference and watch as attendees intently capture flags, break out of handcuffs and hack signs.

With that in mind, it makes sense that this is one of the seven habits. There’s little doubt that simulations will do more to prepare people for real-life situations—after all, practice makes perfect. 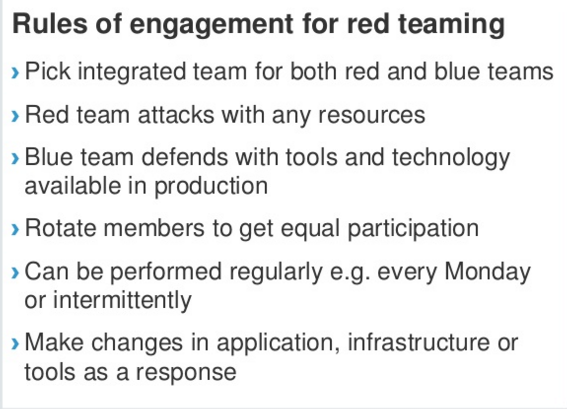 Increasing trust between Dev, Sec and Ops mandates effective and, likely, improved communication. Perhaps one of the biggest takeaways is that, for all the technological bells and whistles the industry throws at combating cybercrime, in the end an age-old skill—communication—is at the foundation of the most-effective security.

*Phishing is assumed the most likely cause of the OPM breach; it is important to disclose that one of my clients, PhishMe, is a phishing defense solutions provider.