Oracle announced today it is adding a GraalVM Enterprise virtual machine for building Java applications to Java SE Subscription at no additional cost.

The first stable release of GraalVM arrived last fall. It consumes less memory, and enables Java applications to spin up faster by taking advantage of capabilities such as a just-in-time compiler. GraalVM Enterprise adds a native image utility that compiles Java and JVM-based applications ahead-of-time (AOT) into self-contained native executables. That approach only includes the classes and libraries needed to run the application, which reduces the size of the binary that gets generated.
Including GraalVM Enterprise in the Java SE Subscription make it easier for Java developers to switch to that Java virtual machine (JVM) to build microservices rather than having to learn another language, Smith said.

Smith said most organizations will continue to build monolithic applications at the same time they’re attempting to construct microservices. The Java SE Subscription makes it possible for developers to employ different JVMs depending on the type of application being constructed or updated, Smith said. A survey of 560 developers conducted by Oracle last month finds nearly half (48%) are already employing GraalVM to build microservices using Java.

How much will organizations rely on Java to build microservices, given all the other programming language options available? That’s up for debate. However, being employed in the enterprise for more than 25 years, the number of developers that know Java well is substantial. Rather than waiting for those developers to become proficient in another programming language, there’s a natural tendency for organizations to want to stick with a familiar language. Each additional language introduced to build applications also tends to complicate DevOps processes in a way that can increase the total cost of IT.

At the same time, however, the number of developers that know how to develop applications using everything from JavaScript to Go is also increasing. Oracle, via ongoing investments made in the OpenJDK project, is moving to make sure Java stays relevant at a time when the number of programming languages being employed has never been greater. For what it’s worth, GraalVM is designed to support multiple programming languages, including JavaScript. 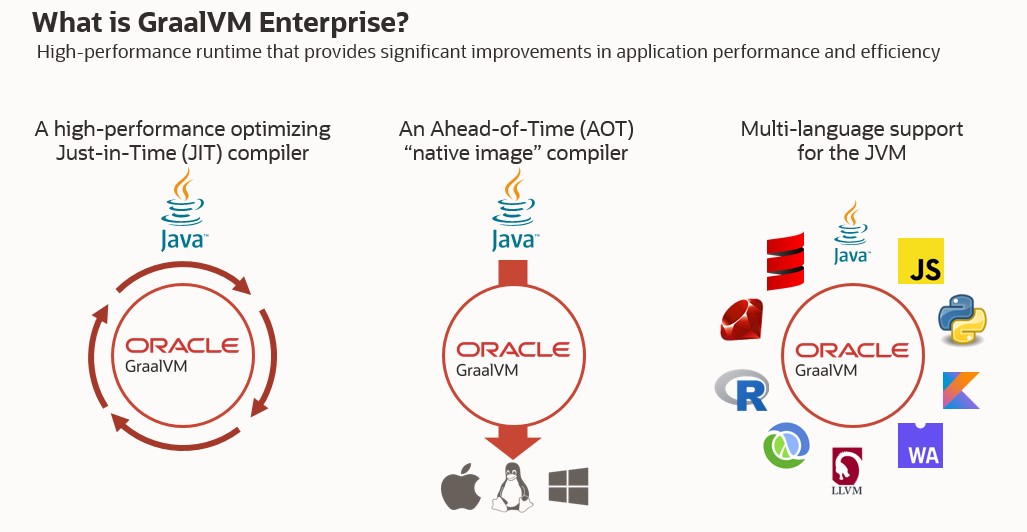 It’s unlikely Java will fade into obscurity any time soon. IT organizations have a vested interest in embracing next-generation JVMs, if for no other reason than making Java applications more efficient, regardless of how they are built.

It’s also worth mentioning that frameworks – such as Quarkus from Red Hat – that enable Java-based microservices to run natively on Kubernetes clusters already rely on GraalVM. In some cases, developers may wind up employing such a framework without realizing it relies on GraalVM. In other cases, the challenge will be getting developers to opt for GraalVM as their JVM of choice when so many of them have routinely used the same JVM for more years than they care to admit.