Home » Blogs » AI » From Orwellian Nightmares To Unicorns: Why I’m All In On DevOps

Over the years I’ve helped literally thousands of customers gain efficiencies in their data centers. I’ve met and become friendly with a lot of IT pros but I’ve got to admit – I never envied them. Well, maybe I envied some of the views in NY and Jersey City. And some of the toys they got to play with over the years were amazing.

Nonetheless, I didn’t envy them because many of my friends in director and VP roles spent a huge percentage of their time fighting politics that resulted in Orwellian distortions of the truth. A couple of stories from the early 2000s might help illustrate my point:

1. Two guys pulling all-nighters delivering a $1.5B roll out of IP communications while 25+ project managers debate progress from 9-5

The headline pretty much captures it. This now too-big-to-fail bank, as well as their vendor, had brought in several project and program managers to ensure groups from facilities through supply chain through security and operations were “aligned.” I spent a couple of meetings getting to know all of these project managers before realizing that there were two guys working every night, all night, to manually, using fingers and spreadsheets, push and validate changes. Eventually those operators quit – and the project ground to a halt.

All the alignment, of course, was pretty much BS. At one point I mentioned in a meeting that our software would not run on the same server as the IP Communications System (Call Manager for those curious). I was corrected – “it isn’t a server.”

I responded with something like, “it is an HP DL something or other. Isn’t that a server?“

You cannot make this stuff up. Servers = / servers. Got it?

2. Similar story, different bank – 1% of achievement of goal = “on plan” to outsourcer

The story starts when I was brought in by a huge vendor to a bank that is also too-big-to-fail. This bank also had a high profile project to get the bank over to IP communications. Keep in mind that this was after 9/11 and all the banks were looking up to the teams at Lehman that had been able to get Lehman back trading significantly faster in part because of their use of IP communications. So the project to get the bank onto a new approach to real time communications had CIO visibility.

One of the most surreal meetings of my career occurred when after having been vetted, tested, recommended, and designed into the solution I was granted an audience with the SVP handling the bank at EDS; I feel ok with naming EDS since they no longer exist and I’m sure this executive has retired. Like many folks at EDS he was former military and as an account executive he owned a north of $1B outsourcing contract.

I started off by saying that we can help you get back to schedule, as I know you have only done about 1% of the deployments originally planned. He looked me right in the eyes and said: “EDS is on plan, and we always will be.”

After some back and forth I got it – no matter what the facts on the ground were, he was never going to accept any culpability at all for the project delay. So missing the project time line by 99% was officially “on plan.” That’s Orwellian.

DevOps restores faith in humanity / IT

Compare any decent “DevOps” shop to the above stories and you can see why I’m so enthusiastic about doing my small part to help bring DevOps approaches to operations to a broader market. 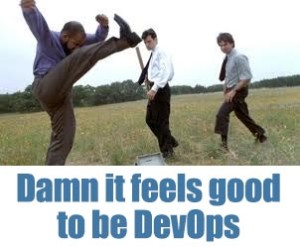 The teamwork between not just Dev and Ops, but between everyone responsible for delivering capabilities to the organization, is so refreshing. Just last week, Google engineering blogged about using machine learning to improve operational efficiency of their data centers, with a focus on power consumption and so forth. The technology I get – we are headed down a similar path with deep learning and control theory. But what struck me more than the technology was the data they are using to draw inferences would often be siloed and tightly controlled by groups within IT at legacy companies precisely because it could be used to score points.

So DevOps entails more than infrastructure and code and collaboration. With DevOps, IT organizations move from fighting over terms like “server” and “on plan” that are often filled with well meaning and intensely frustrated teams towards an environment where cool stuff happens all the time. And IT done right – making sense of the world with software and hardware – is incredibly cool.

I’m betting on DevOps because I want the world to be filled with DevOps unicorns and because, like my friends that are operators within legacy environments, I cannot stomach more Orwellian obfuscation of the facts on the ground for political expediency. DevOps makes the world smarter and IT teams a heck of a lot happier. What’s not to like?

While building constructive culture, engaging workers individually and helping staff avoid burnout have always been organizationally demanding, they are intensified by the continuous, always-on notion of DevOps.  When we think of work burnout, we often think of grueling workloads and deadline pressures. But it also has to do with mismatched ... Read More
« Inject failure to make your systems more reliable
Amplifying Docker with AMP and Brooklyn »