OverOps this week announced it has added support for a git blame and automated source attach capability to its namesake platform for analyzing code that surfaces both root cause data for every error as well as the identity of the developer who owns that code.

Eric Mizell, vice president of solution engineering at OverOps, said once those developers are identified, the OverOps platform will automatically alert them about the errors in the code.

Every Git repository provides access to a git blame tracking command that identifies the authors of source code and the last time files were modified source file. The git blame and automated source attach capability extends that tracking command to accelerate the process of fixing errors that are discovered by the OverOps platform, which leverages machine learning algorithms and other forms of advanced analytics to perform static and dynamic analysis of code to detect errors in code before a DevOps team promotes code into a production environment.

Mizell said this latest capability accelerates the remediation process by automatically routing critical alerts to the developers responsible for the last commit. 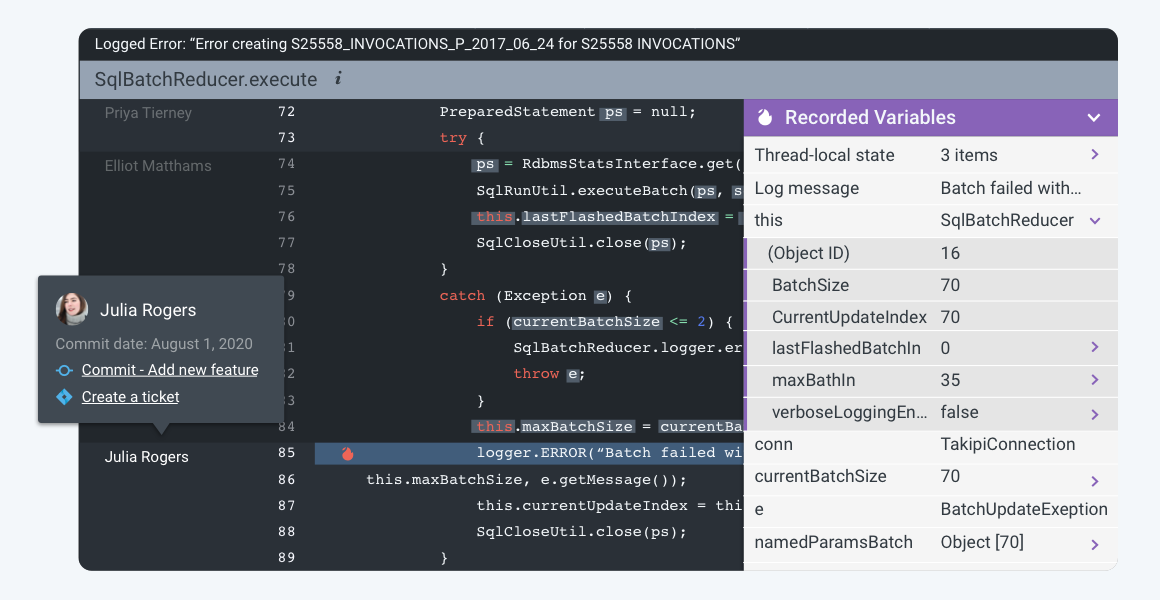 Ultimately, DevOps teams should be able to spend less time in “war rooms” trying to resolve issues in a production environment because errors in code will have been addressed much earlier in the application development life cycle, he said.

Naturally, there’s a lot of sensitivity when it comes to analyzing code. It will be up to each IT organization to determine the level of visibility into the quality of the code being created by each developer. Most organizations will simply route alerts to individual developers to address without making each issue the topic of a team review. However, organizations may want to track what types of errors are being made consistently to better inform training requirements.

Regardless of approach, most experienced developers don’t want to spend a lot of time discovering the same issues multiple times when reviewing code someone else wrote. Tools that automate the discovery of those issues should enable development teams to focus their efforts on the more complex issues that inevitably arise when building modern applications.

In the wake of economic downturn brought on by the COVID-19 pandemic, there’s a lot more pressure on DevOps teams to become more efficient. In many cases, the velocity at which applications need to be built, tested and deployed in the wake of the economic downturn has increased as organizations invest more in digital business transformation.

Not every developer will enjoy have the code they wrote analyzed by a machine. However, most coders take pride in their work and would prefer to address in their own way any issue that may arise. The challenge is putting in place a code review process that results in better code being deployed faster without unnecessarily antagonizing the most valuable contributors to the digital success of any organization.

Now, more than ever, companies who rapidly react to changing market conditions and customer behavior will have a competitive edge.  Innovation-driven response is successful not only when a company has new ideas, but also when the software needed to implement them is delivered quickly. Companies who have weathered recent events ... Read More
« Eggplant Employs AI to Surface Test Recommendations
To Live by the Sword »