Panamax, a new open source tool from CenturyLink brings the promise of building complex Docker based environments like a child using Legos. The tool is a management interface for managing and building multiple Docker environments. You can search the official Docker repository as well as a number of others to find best of breed, Docker pre-built containers. Panamax is available on GitHub and is released under an Apache 2.0 license.

I spoke to Lucas Carlson, chief innovation officer at CenturyLink yesterday about Panamax. Lucas also heads up the CenturyLink Labs and this is one of the first projects that they have developed and released. Lucas gave me a demo of Panamax. In just a few moments we had searched for and found several WordPress containers. We chose one from the official Docker repository and quickly installed it. After that it was simple to choose other services such as Ruby and add them to our instance as well. In no time we had added several different Docker containers and had build a pretty sophisticated environment. Below are some screen shots of Panamax in action. 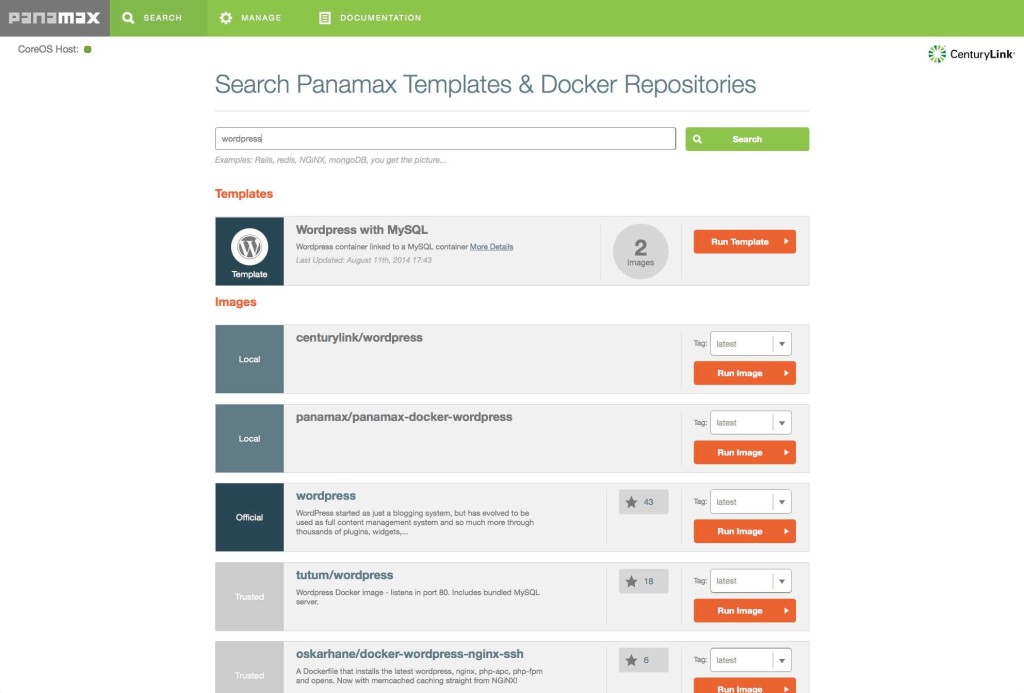 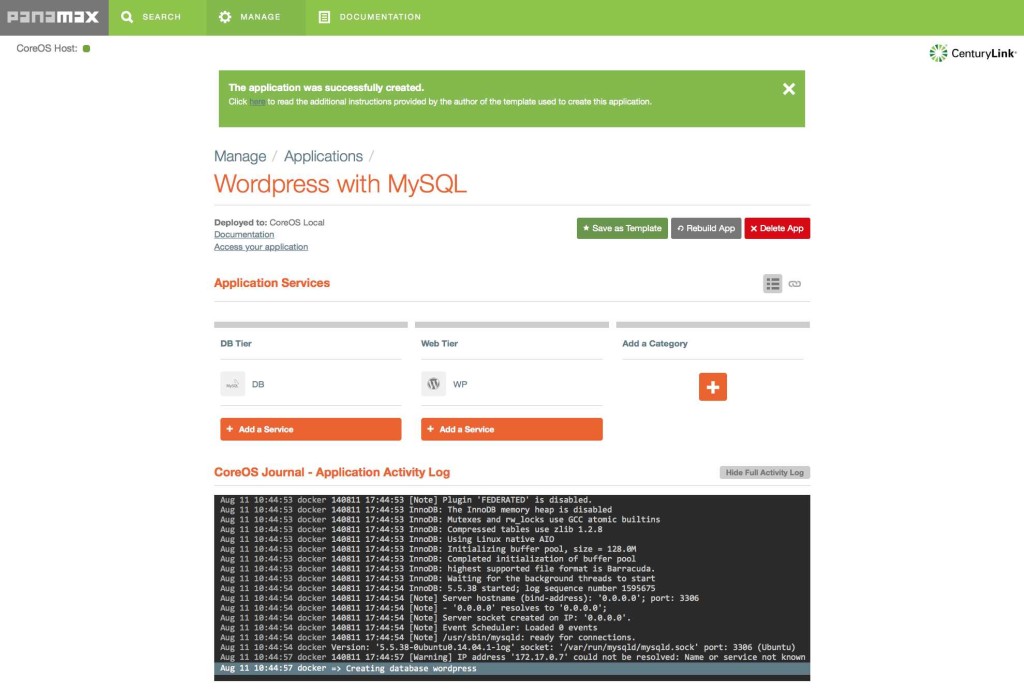 Lucas explained to me that he thinks of Panamax as “Docker management for humans.”  It makes building multi-docker environments really easy. From the Panamax press release:

Prior to Panamax, running multi-container, multi-server apps with Docker was difficult. Developers needed to learn as many as five new technologies – libswarm, systemd, etcd, ambassador and fleet – as well as Docker-specific best practices just to get started. Panamax packages these technologies and best practices into an intuitive user experience that automates the heavy lifting of deploying complex applications. Developers simply drag-and-drop containers and can easily access the open-source cloud application marketplace. Panamax can run on laptops, virtual machines, bare metal or any public cloud that supports CoreOS like CenturyLink Cloud.

Right now as the previous paragraph points out, Panamax only supports CoreOS. Of course this gives it the availability to run on Amazon and a number of other cloud providers in addition to CenturyLink’s own cloud service. However, it is only a matter of time I would think until Panamax is ported to other cloud Linux OS distributions.

Docker is already one of the fastest growing open source projects of all time.  Third party applications such as Panamax validate that there is an entire ecosystem that is beginning to emerge and thrive around Docker containers. I was pitched by several PR agencies this past week about new companies launching or coming out with products around Docker.

Many of these companies believe that Docker is going to closely follow the path of VMware as it becomes the virtualization solution of choice.  What Docker will offer versus what others will offer is still being thrashed out. It was similar with VMware as well. What security would VMware provide and what 3rd party security was available? This was a burning question for a while. Similar questions will be asked around Docker and everyone jockeys for position around table here.

CenturyLink of course feels that Panamax will give them a leg with Docker developers choosing the CenturyLink cloud over Amazon and others.

So Docker continues its red hot ascent through the tech world. Panamax coudl become a star in the Docker world allowing everyone to make complex Docker environments as easy as building Legos. As Lucas said, it is Docker management for humans.

The entire CI/CD/ARA market has been in flux almost since its inception. No sooner did we find a solution to a given problem than a better idea came along. The level of change has been intensified by increasing use, which has driven changes to underlying tools. Changes in infrastructure, such ... Read More
« Rackspace DevOps automation service broadly available
Q & A: Puppet Labs CIO Nigel Kersten »