Static application security testing (SAST) tools are designed to balance false positives (incorrect warnings) with false negatives (missed vulnerabilities) primarily because deeper analysis requires more time and computing resources. Both of these are in short supply among developers that are tasked with meeting shorter and shorter product delivery milestones.

So, while SAST vendors consider a true positive a correct detection of a real defect, and a false positive an alert on a bug that does not exist, this is rarely the lens used by developers. What really matters to them is whether the output of a SAST tool is useful and actionable. For example, there is a great deal of variation in how developers interpret SAST scan results, depending on the nature of the defect, the role of the user, the platform on which the application will run and the environment in which it is deployed.

Take, for example, a true positive result of a buffer overrun, one of the most notorious classes of C/C++ defects from a security perspective. In the early stages of application development, it almost always makes sense to change the code to fix such a bug. Developers are actively changing the code, anyway, so fixing it involves little extra overhead. However, if the same defect is found after the application has been deployed, then it is much trickier to decide whether it is worth fixing. 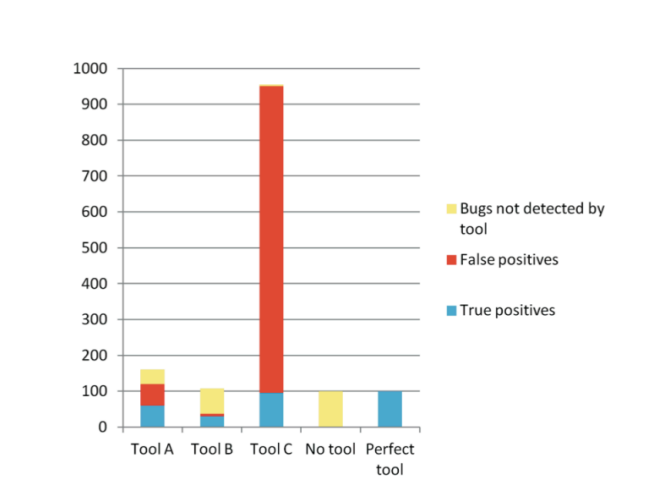 A comparison of recall and precision of hypothetical SAST tools.

Developers hate false positives because they introduce unnecessary work and delays. This, in turn, has a disproportionate effect on the way tools are designed, configured and used. If given a choice between Tool A that reports 40 real defects and 10 false positives, and Tool B that reports 50 real bugs but with 50 false positives, users will almost always prefer the former, even though it is finding fewer real defects. This is perfectly understandable — users are asked to weigh an immediate concrete negative (time spent looking at false positives) against an intangible potential future positive (vulnerabilities that may not show up).

However, if one offsets the time and risk saved in finding those 10 bugs earlier (i.e. by avoiding expensive and potentially dangerous bugs in finished products) against the time needed to assess the additional 40 warnings as false positives, then it quickly becomes apparent that configuration B is more economical. This is especially true with security vulnerabilities that slip through testing and can have expensive consequences.

Since the number of warnings within a DevOps pipeline can be a deterrent to getting the most out of a SAST tool – especially early in the project, when it provides the greatest benefits – organizations should consider the following techniques to increase developer attention to alerts:

Despite the fact that it will invariably produce some false positives, SAST helps shift security further to the left by ensuring security and programming vulnerabilities are eliminated when code is being written, rather than at the testing stage when they are much more expensive to fix. Filtering and prioritizing warnings are two effective techniques to ensure developers don’t throw out the baby with the bathwater.

The entire CI/CD/ARA market has been in flux almost since its inception. No sooner did we find a solution to a given problem than a better idea came along. The level of change has been intensified by increasing use, which has driven changes to underlying tools. Changes in infrastructure, such ... Read More
« Best Practices for Building Next-Gen Software Teams
Akamai Security Research: Financial Services Continues Getting Bombarded with Credential Stuffing and Web Application Attacks »