As Mike Vizard detailed, this year’s Puppet Conference featured an impressive lineup of new products and services brought to market. The company appears to be firing on all 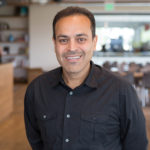 cylinders. The event also marked the first anniversary of Sanjay Mirchandani as Puppet CEO. I had a chance to sit down with him to review the past year, as well as the announcements at the conference.

I will leave the product stuff to Mike’s article, but I asked Sanjay what he thought was his greatest accomplishment over the last year. He said that hands down it was assembling the great team he has put together. To be frank, I agree with him. In a time when execs at tech companies seem to hop around like fleas, Sanjay has assembled a world-class, enterprise-proven leadership team.

In my opinion, this builds on Puppet’s greatest strength, which is its community. Puppet, like many successful DevOps companies, builds on its free, open-source roots and is nourished by a passionate, involved worldwide community. This was once again in full view at Puppet Conference. Frankly, my favorite time of the day was lunch (no surprise there, but not for the obvious reasons), where I would get a chance to sit down with “strangers” and listen to their experiences, what challenges they face at their jobs and where they see things going. I love those opportunities for unfiltered dialogue with real practitioners. The feedback I heard was pretty consistent.

They enjoy using Puppet and they appreciate what the company is doing. They noted was that even though the company is developing products that compete with other tools they are using currently, they like the fact that Puppet doesn’t force them to make an either/or decision. They can continue using the tools they are comfortable with or start adopting Puppet’s new tools, all the while using Puppet for what they have always used it for.

I asked Sanjay another key question: “What is your biggest failure or disappointment this year?” The answer was surprising. He said he failed to understand that some people really were not clear whether they could use Puppet in a cloud environment. Mind you, this is during a conference in which several relationships with cloud providers were announced. But evidently, some people did not understand that it works in cloud environments as well as on-premises—and, for that matter, in a hybrid environment as well.

Mirchandani is not underestimating this view any longer. Puppet is emphasizing its cloud chops at every turn. As I mentioned, I was not aware of this view either, so it is interesting.

In any event, this year’s Puppet Conference was the biggest (about 1,200 people) and best yet. I thought the company did a great job trumpeting a number of new products, ideas, partnerships and a clear path forward. As one of the founding and leading DevOps tools providers, its future continues to look bright.