It is safe to say that since the term NoOps escaped from its confines as an assembly language instruction (NOP or NOOP mnemonic for no operation) and in microelectronics (NoOps or null instructions inserted into pipeline, creating bubbles*) into enterprise IT, it has caused more than its fair share of consternation and controversy in the DevOps community. This is hardly surprising, when some of the more prominent claims for NoOps placed emphasis on ending operations entirely, threatening the jobs and livelihoods of thousands of knowledge workers. As with previous movements for automation, NoOps came under immediate attack—and, somewhat ironically, the criticism came from IT industry workers. For better or worse, IT has more than its fair share of hyperbole, religiosity and grandstanding, with the NoOps debate being no exception.

As someone who started his technology career as a developer, moved into infrastructure and is now accountable for resources being allocated to IT, I find the debate does little to inform my decision-making. In this article I want to share my definition of NoOps with the broader community to clear path for greater adoption of NoOps principles among the DevOps community. I see both of these communities as being distinct and yet highly complementary, as long as our ultimate goal is to generate value for the organizations we choose to work for and, by extension, the customers which they serve.

NoOps as an Ideological Principle

Various definitions of DevOps have been refined and become more stable over time. I don’t believe it would be particularly controversial to recognize DevOps as a culture, a methodology for creating high-quality applications and delivering them into production in the most efficient manner. In my book, “NoDev NoOps NoIT,” I choose to define NoOps as a guiding principle that makes assertions to help IT decision-makers inform their decisions. It is more useful to separate our notions of DevOps and NoOps into methodological and ideological categories, because doing so strengthens our understanding of both terms and equips us to make better IT decisions.

Before we examine the assertions made by the NoOps principle, I want clarify why I have rejected other definitions of NoOps and critiques of NoOps itself.

NoOps Spells the End of Operations

One of the most common and enduring uses of the word “NoOps” is to refer to eliminating IT operations entirely. The problem with such definitions is that they conveniently scope IT operations in a manner that allows them to be eliminated. IT operations roles are not static in the face of changing technology; arguably, they evolve more rapidly than application roles. The original activities of racking, stacking, cabling and administering IT infrastructures in a typical enterprise has been hugely diminished by outsourcing, commoditization and the advent of cloud infrastructure. However, new activities in software development life cycle, automated provisioning, monitoring, metering and security have created new roles for infrastructure/operations developers. NoOps is not about eliminating IT operations; rather, it is concerned with maximizing automation in IT operations.

NoOps is the Evolution of DevOps

While superficially it may well seem that NoOps takes DevOps to its logical conclusion, this line of thinking chooses to ignore the huge swath of DevOps methodology that does not overlap with the automation of operations or the fact that DevOps is itself an evolving methodology. I simply don’t find this definition to be particularly useful in day-to-day decision-making. At best, it’s a dimly lit observation.

DevOps is NoOps—NoOps is Just a Confusing Term

The idea of NoOps is an expression of the benefits of automation. How we choose to define the term will dictate its utility. If we choose to define it in a fashion that leads to confusion, then fault lies with the definition and not with the idea itself, which I believe is a powerful one that should not be ignored. Attempting to simply define away NoOps is as wrong-headed as stating that NoOps is the end of operations. Overloading DevOps methodology to encompass NoOps ideology stretches the definition of DevOps beyond its useful boundaries.

NoOps Assertions: Eliminate All Manual Intervention in IT Operations

Eliminating manual intervention in IT operations is a fundamental assertion of NoOps. This assertion is made from an understanding of the benefits of the automation and the observation that the very tools we use in IT—computers—were invented to automate conative and algorithmic processes.

While we may never be able to fully automate every aspect of our operations—for example, some regulators demand four-eyes processes for approval and execution—we must rigorously challenge the unthinking orthodoxy that currently governs many IT processes.

Automate, simplify and standardize: I subscribe to this mantra but one has to proceed in the right order; that is, simplify, standardize and then automate. Otherwise, you literally risk making an ASS out of your IT automation efforts.

Once a process has been simplified, standardizing it follows almost naturally. Stakeholders adopt your process because it is simple, it saves them time and generates value for them.

The opposite is also true: A poorly thought-out, complex process will never win buy-in from users. Any attempt to put lipstick on such a pig will be fraught difficulty, often resulting in the vast majority of users and stakeholders finding exceptions to your attempts to increase adoption of the offending process.

As the trend toward software-defined everything matures, we need to change our organizational structure to adapt with the new landscape. Within enterprise IT, the war between application and operation teams is over, even if there are still combatants that don’t realize that the application teams won. In the software-defined paradigm we are all developers. Application developers write business/end user logic and infrastructure/operations developers write run-book instructions using the tools and APIs made available to them by infrastructure-as-a-service (IaaS) and platform-as-a-service (PaaS) vendors. Both of these types of developers write code and we find more and more frequently it is the same individuals writing both application and infrastructure code; hence, the rise of the full stack developer and the full spectrum technologist.

As a CTO I organize my technology division into three teams: Application Development, Infrastructure Development and User Experience Development. These teams are physically situated next to each other and work toward a single technology strategy defined by a NoOps ideology and DevOps methodology.

When we are presented with ideas that are threatening and challenge fundamental elements of our existence, such as the way we work, the best response is to seek out opportunities presented by those ideas and adapt to them. For the DevOps community, the first step in engaging with NoOps is to accept the ideology is based on a very real and powerful foundation of automation. As a community we can choose to dismiss NoOps or we can choose to embrace the possibilities it offers and allow it to enrich DevOps methodology. I would posit that those among in the DevOps community who can adapt to a NoOps reality will not only survive but thrive.

About the Author / Hussein Badakhchani 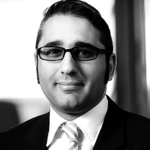 Hussein Badakhchani is a Distinguished Technologist and author with over 20 years of professional experience in financial services technology. Having worked for institutions such as the Bankers Automated Clearing System (BACS), Deutsche Bank and VocaLink – MasterCard, Hussein has a proven track record of delivery in some of the most competitive global capital markets. As a trusted academic, practitioner and adviser, Hussein also provides critical analysis of technology to executive and investment decision makers in government, banking, financial, commercial and defense sectors. He is the author of “NoDev NoOps NoIT,” principles governing the ideology, methodology and praxeology of informed IT decision-making. Connect with him on LinkedIn.