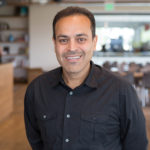 I attended my first PupetConf last week in San Diego. While there I had a chance to sit down one on one with Sanjay Mirchandani who recently took over as CEO/President of Puppet from long time CEO and founder, Luke Kanies, who is now a member of the BOD. As this was my first meeting with Mirchandani, it was good to understand what he sees his mission is at Puppet and how he views the market and Puppet’s place in it.

I would say first of all that Sanjay understands what has made Puppet successful to this point. Luke and the team have built a tremendous culture around Puppet. With over 34,000 users, 75% of the Fortune 100 and a world-wide base, Puppet has the community and market perception of a winner. Sanjay sees his job to build a truly world-class organization on top of this great foundation. The difficult part is to not mess with this great foundation while building that world-class organization.

Sanjay has already started this building process. Over the last few months he has brought on board several senior level people flesh out the executive team. Some of these new Puppet executives are: 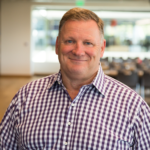 Mike Guerchon, Chief People Officer. Mike joins Puppet from Riverbed and while he is adamant about not being HR, he will lead Puppets HR department. Part and parcel of that is to preside over what will probably be a huge uptick in new Puppet employees all over the world. 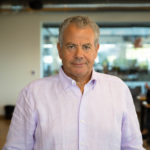 Gary Green, SVP Sales. Gary was a long time VMware executive who was instrumental in building out the successful sales team over there.  Sanjay is very excited about what Steve brings to the Puppet team. With Sanjay’s plans to expand Puppets offerings (more about that below) Gary will be key to taking Puppet to the next level. 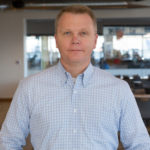 Simon Hayes, Business & Corporate Development. To be fair Simon joined this past February, so not really a Sanjay appointment, but still a fairly new exec team member. Simon comes from Citrix and Sanjay says brings some big company biz and corp dev experience to the team. Could it portend some M&A activity going forward? Perhaps, we will have to see. 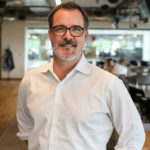 Scott Campbell, SVP of Go-To-Market Initiatives. Scott is another new add to the exec team. He was most recently at Jive Software and at Tripwire before that. His background is in sales. I asked Sanjay if he was a “farmer” to Gary’s “hunter”, but Sanjay says no. Scott’s role is to make sure Puppet customers are getting the most out of their products, as well as understanding what their needs and future needs are.

Besides the four highlighted above, the Puppet exec team is well filled out now. Sanjay should have the lieutenants needed to carry out his plans.

So what exactly are his plans? Well as I said before first and foremost is to not rattle the apple cart and mess with Puppets enviable culture and the fanatical support of its customers and users. At the same time converting more of those 34,000 users into paying customers is certainly a major priority. They currently have about 1200 paying customers. Quick back of the napkin math says about 3% of users are paying customers. In my experience that is about right for an open source tool. Somewhere between 2-4% convert to paying customers. The trick that successful open source vendors figure out is how to get that number higher. That is what Sanjay and team are working on.

One idea that Sanjay and I discussed was adding services to the mix. It is a common practice in commercial open source companies. At this time Puppet isn’t ready to announce something. But I would not be surprised to see either Puppet itself offer services or an aggressive move to grow a channel of service providers who work closely with Puppet.

Of course growing the user base beyond the 34, 000 current users is in mix. One strategy on that is Project Blueshift. I think of it as future proofing Puppet. But as you will find in an upcoming article from my conversation with Gareth Rushgrove, Blueshift is about making sure that Puppet’s core functionality of configuration management extends horizontally across all of the different platforms that the market is using. Right now Docker and containers are a major focus of this.

Beyond my meeting with Sanjay, PuppetConf was a great trip for me. I enjoyed meeting many new faces, catching up with many folks I knew already and most of all, seeing the Puppet culture up close. Sanjay Mirchandani has an exciting opportunity in front of him, but he seems to have a very capable team to work with and a great foundation to build on. Looking forward to next years PuppetConf (back in San Francisco) to see how it plays out.

No matter where you are in your hybrid cloud journey, security is a big concern. Hybrid cloud security vulnerabilities typically take the form of loss of resource oversight and control, including unsanctioned public cloud use, lack of visibility into resources, inadequate change control, poor configuration management, and ineffective access controls ... Read More
« DevOps Transformations Everywhere; Join Us To Watch, Hear & Learn
How To Be Great At DevOps »