Home » Blogs » Security is About People, not Technology

Just a random thought of the day: We have the world’s best example of how many of our security woes are actually people problems, not technology problems.

We all know that. We’ve all discussed it—but let’s consider this example and have a quick discussion about 2FA.

Epic Games had a problem not unlike the rest of us. But it was costing them money every day, in part because of the nature of their user base. The problem? Attackers taking over the accounts of legitimate Fortnite users. In the world of gaming, scammers are rife because the player base is younger. At least since Ultima Online (1997), online games have been growing and Fortnite is at the forefront of that movement, with user counts unheard of before it became popular. That many users combined with hackers and scammers taking advantage of the younger demographic attracted to games—over 60% of Fortnite’s massive user base is under 24 years old—they do not provide a further breakdown, but there are certainly kids as young as six playing; and possibly even younger players).

That made for a problem. Investment of time and money and energy for supporting customers having account issues was no doubt huge. I do not have an insider feeding me information, but simple math—and the evidence of steps they’ve taken—suggest that this is the case.

So they did with kids what far too many of us don’t have the guts to do with our adult workforce. They implemented 2FA. While they did not require it—and, like most game companies, are tight-lipped about any kind of player statistics—they implemented it with a carrot-or-stick approach that, no doubt, has been successful. My gaming group of half a dozen all use it—because we either wanted the carrot or were avoiding the stick. It’s not really a stick. Call it carrot and wall. The carrot comes in two forms for the two most popular versions of the game: A free dance for your character (toon, if you prefer) to perform in Fortnite: Battle Royale. 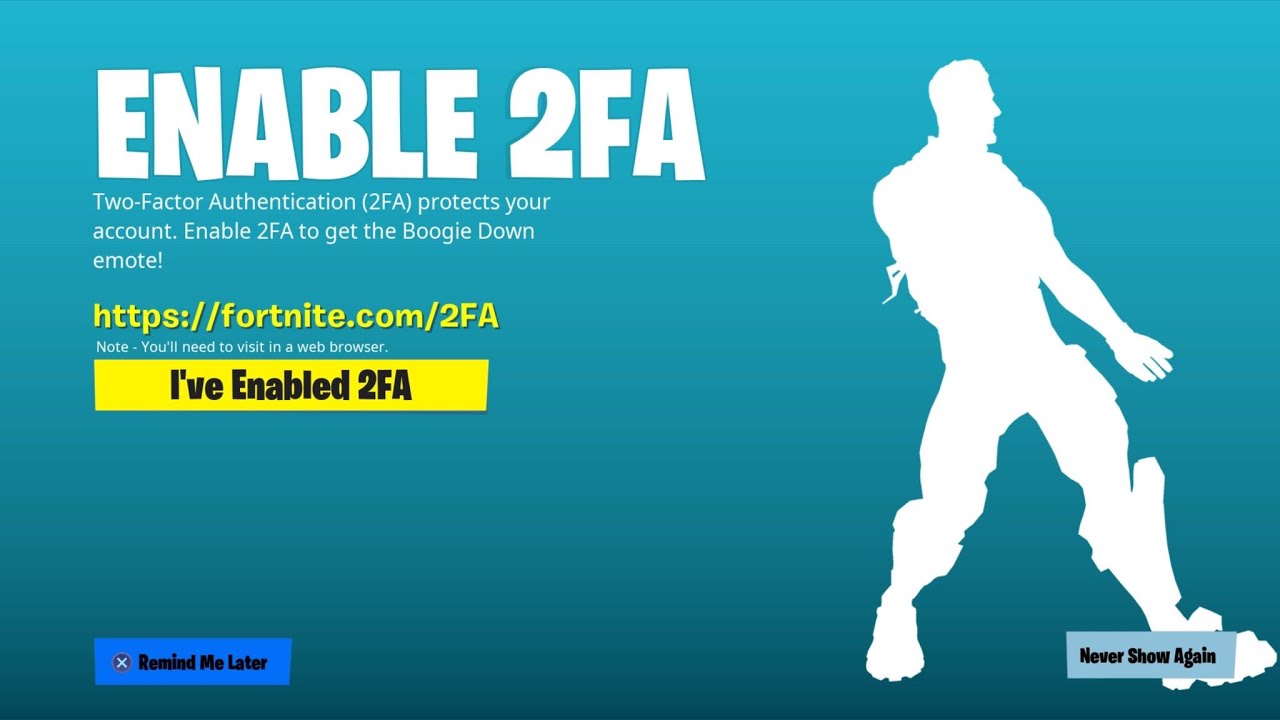 And free gear in the paid version –  Fortnite: Save the World. 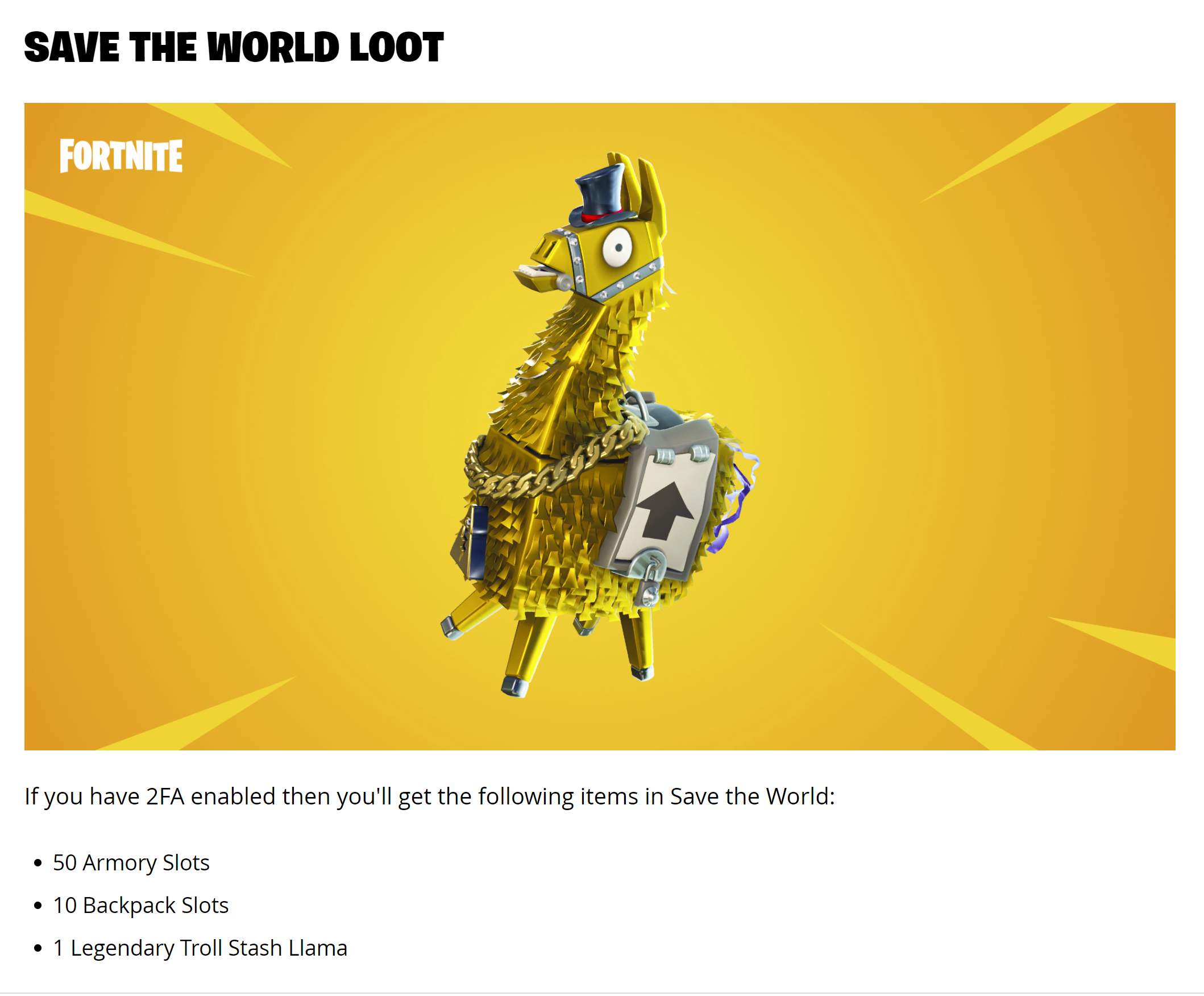 For those of you who are not familiar, both of these are decent rewards; calculated by the Fortnite team to be compelling enough to warrant the steps, but not insane. The Save the World rewards are actually better in terms of usefulness, but the dance for Battle Royale is likely more popular.

Then, they put up a wall. If you want to play competitive Fortnite, you must have 2FA turned on. It is possible that this was done to protect the sanctity of their tournaments, but it has the effect of providing the other half of the “reward and punish” equation. According to Compare Camp, 40 million players attempted to qualify for the game’s World Cup alone. So that is the minimum number of 2FA activated accounts—you cannot participate in competitive Fortnite without 2FA turned on.

At this point, we should all recognize that some form of 2FA, even the much-maligned ones like email (maligned because someone who compromises your email then has easier access to everything because 2FA is compromised), is almost essential. The cost of someone hijacking a valid user account—like the lead systems engineer or the CEO—is just too high to ignore. But some 2FA solutions are harder than others. So, we need to follow Epic Games’ lead, and make it as simple as possible, provide incentives to employees to turn it on and, if suitable, wield a stick. A minor ding on reviews until implementation is complete should be enough, if the incentives are nice. A free day off? A small bonus? You know your organization, both what management will agree to pay for and what users will find compelling.

Get it done. The last thing you want is for your CEO to suddenly start saying/doing erratic things on corporate accounts. Unless they already do—then I suggest you consider looking for a new job. I know; there are 5,000 things to do and only a few of you. But this one is big. Don’t wait until you’ve lost accounts to turn on a pretty effective prevention mechanism.

While building constructive culture, engaging workers individually and helping staff avoid burnout have always been organizationally demanding, they are intensified by the continuous, always-on notion of DevOps.  When we think of work burnout, we often think of grueling workloads and deadline pressures. But it also has to do with mismatched ... Read More
« Easy Alternatives
Why You Need a Value Stream Delivery Platform »

5 Steps to Succeed With Blue-Green Deployment

How to Pivot and Join Time-Series Data in Flux

Your Tech is Only as Good as Your Infrastructure