Home » Features » So Many Options, So Little Time

So many language/framework options, so little testing time, that is.

Recently, two projects I was working on drove me to check out a breadth of languages and/or frameworks to handle cross-platform development. While Unity and Unreal have traditionally been my game platforms of choice and I typically use Xamarin for cross-platform (though native development is more common for us on both Apple and Android), I decided I needed to do the occasional sweep to find out what is new out there.

The two projects are a game on which I’m helping a new game developer learn and a graphics-heavy application that is unsuited to web development. Both would work best in a cross-platform environment; both would benefit from a game engine’s graphics manipulations. But both could be done in any language that supports graphics, as there isn’t a heavy physics requirement to the game.

So I went looking at what’s available now and how it fits. From React Native to Godot to Flutter and even Kivy, I kicked the tires on each, got them running, ran and traced samples, wrote some code of my own, even talked with friends that were using them to get their opinion. 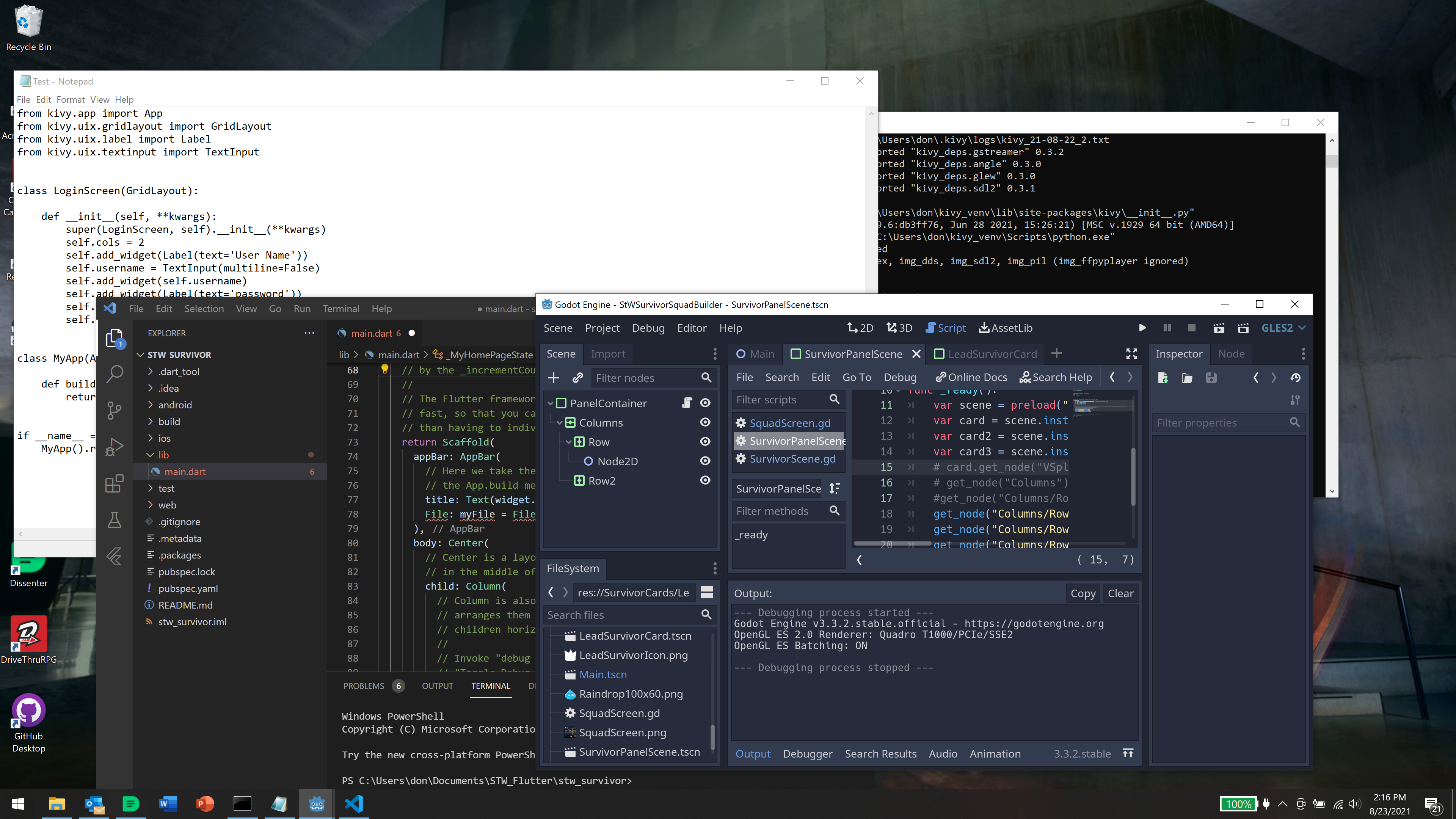 The one thing that came through loud and clear? There is no way that security and testing are keeping up with this language/framework proliferation. Kivy has a language (more of a specification than an actual language, but still—source code) that can run on top of Python (it’s not required to use the framework, but it’s kind of assumed you will if the app gets beyond a certain size); Godot has a language that is integral to the framework and that you use pretty much everywhere. React has a ton of add-on code and both Flutter and Dart are new languages.

I like stuff from each of them. I don’t like that we’re going to use them in ever-increasing amounts and we’re going to expect testing to stay on top of those implementations. Each of these platforms/languages/environments has a large following that is doing some of the testing, but since they’re all relatively new, “How much testing?” is a valid question. And tests have to be done in those languages, implying that those writing need to know them and so do testing teams.

Where did we end up? We haven’t made a final decision yet, but taking input from the person I’m mentoring, coworkers and those who are using each of the above, we’ll probably end up using Godot. For 2D apps, it is the bomb. Our team is small, so I can offer my knowledge of Godot to shore up testing and everyone agrees that its Python-like language is acceptable, while the graphic design element is nicer than the competition. Both applications will benefit from Godot’s graphics processing capabilities and the game will benefit from game elements built into the Godot Engine.

Here is an interesting side note: All of the products we looked at are open source. Both of the default products that we (and just about everyone else) would choose for the game are commercial. That’s interesting, but we don’t need the weight of those commercial solutions for a simple 2D interactive game/app.

For you all, the questions might be harder to answer. With larger projects come larger requirements for source size, test, you name it. Choose carefully, with an eye on the future. Personally, I think React Native, Godot and Flutter would all be good choices for cross-platform applications, with Godot the best solution for cross-platform 2D games. And all three are likely to be around with a good size following for a long time, making them safer choices. That is less clear with Kivy, though the popularity of Python appears to be driving growth in Kivy use.

Whatever you choose, plan for all phases of development, not just writing code. That’s true of everything, but new cross-platform tools are complex beasts, so it is worth reminding you all.

And hey, if you have a cool app you developed with one of these tools, point me to it. Always good to see what you all are doing, and nice to see the breadth of solutions these languages can create.

While building constructive culture, engaging workers individually and helping staff avoid burnout have always been organizationally demanding, they are intensified by the continuous, always-on notion of DevOps.  When we think of work burnout, we often think of grueling workloads and deadline pressures. But it also has to do with mismatched ... Read More
« Global Demand for Developer-Centric Security Fuels Secure Code Warrior’s Continued Growth
Cosmonic Contributes WebAssembly Runtime to CNCF »