Over 90% of organizations will use public cloud services this year. In fact, public cloud customers will spend more than $50 billion on Infrastructure as a Service (IaaS) from providers such as AWS, Azure and Google. This boom is, of course, due to the broader adoption of public cloud services. But, it is also caused by the expansion of infrastructure within existing accounts. Not surprisingly, the growth in spending often exceeds the growth in business. That’s because a huge portion of what companies are spending on cloud is wasted.

Before getting to the waste, let’s look a little closer at the growth in the cloud sector. Gartner recently predicted that cloud services spending will grow 17% in 2020 and will reach $266.4 billion. While Software as a Service (SaaS) makes up the largest market segment at $116 billion, the fastest growing portion of cloud spend will continue to be IaaS. This will increase 24% year-over-year and surpass $50 billion in 2020. 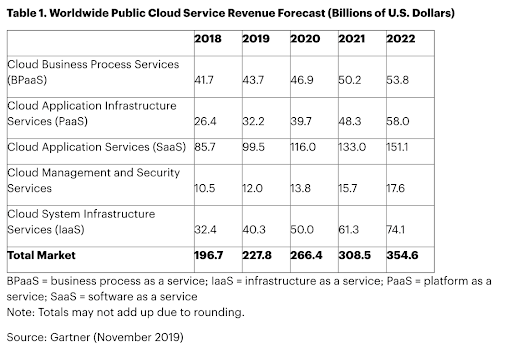 As cloud computing growth continues and cloud users mature, we might hope that this $50 billion is being put to optimal use. While I personally do find that cloud customers are more aware of the potential for wasted spending than they were just a few years ago, this does not seem to be correlated with cost optimized infrastructure from the beginning. The fact is, it’s simply not a default human behavior.

I frequently run reports for companies having issues with cloud waste. Invariably, I find wasted spend in these accounts. For example, one healthcare IT provider was found to be wasting up to $5.24 million annually on their cloud spend—an average of more than $1,000 per resource per year.

Below is where the total waste is coming from.

So, I find the following wasted spend from idle resources: $33.3 billion in compute spend, times 0.44 non-production, times 0.76 of week idle, equals to $11 billion wasted on idle cloud resources in 2020.

Overprovisioned Resources: Another source of wasted cloud spend is overprovisioned infrastructure—that is, paying for resources are larger in capacity than needed. That means you’re paying for resource capacity you’re rarely (or never) using. About 40% of instances are sized at least one size larger than needed for their workloads. Just by reducing an instance by one size, the cost is reduced by 50%. Downsizing by two sizes saves 75%.

The data I see in client infrastructure confirms this—and the problem may well be even larger. Infrastructure I see has an average CPU utilization of 4.9%. Of course, this could be skewed by the fact that resources I deal with are more commonly for non-production resources. However, it still paints a picture of gross underutilization, ripe for rightsizing and optimization.

The Extent of Wasted Cloud Spend

Between idle and overprovisioned resources alone, that’s $17.6 billion in cloud spend that will be completely wasted this year. In fact, it could well be higher. Other sources of waste include orphaned volumes, inefficient containerization, underutilized databases, instances running on legacy resource types, unused reserved instances and more. Some of these result in significant one-off savings (such as deleting unattached volumes and old snapshots) whereas others can deliver regular monthly savings.

That’s a minimum of about $5 million wasted per day, every day this year, that could be reallocated toward other areas of the business.

It’s time to end wasted cloud spend. Perhaps acknowledging the extent of this problem is a good first step.

The entire CI/CD/ARA market has been in flux almost since its inception. No sooner did we find a solution to a given problem than a better idea came along. The level of change has been intensified by increasing use, which has driven changes to underlying tools. Changes in infrastructure, such ... Read More
« Provide Continuous Value with Product-Centric Delivery
Extending Cloud to Enable Intelligent Edge »