The state of the art in software testing has not kept pace with advances in software development over the past 10 years. Modern quality assurance (QA) groups struggle to play their role in a world of continuous delivery, leading to more defects in production, low QA morale and excessive testing overhead. Thankfully, innovations in machine intelligence and test automation have laid the groundwork for a better model—one that will allow QA to keep pace with development, increase productivity, improve product quality, and raise customer satisfaction across the software industry.

Why We Need a New QA Toolset

Existing QA solutions were built for a world where software changed infrequently and functionality was highly specified and documented.  This is no longer the case.

Products Are Evolving Faster Than Ever

Several forces are converging to accelerate development. Software as a service (SaaS) has removed many of the issues around operating system compatibility, packaging, deployment and versioning that consumed significant development time during the installed software era. Consider that in 2016 Amazon Web Services delivered more than 1,000 new features and services—a pace that would be impossible with packaged software.

The proliferation of open source and cloud-based features as a service has also reduced the time that developers spend building generic functionality. At mabl, for example, the thought of building our own authentication engine never crossed our minds; we use Auth0. Instead of building our own data processing pipeline, we use Apache Beam and Google Cloud Dataflow. Rather than building our own ML framework, we use Tensorflow. And the list continues; reusable components and cloud-based services save us years of engineering effort, allowing our developers to deliver product features rapidly.

Continued adoption of agile methodologies has further increased the efficiency of development teams. A recent McKinsey study of 1500 software projects demonstrated that agile teams are 27 percent more productive than those that follow methodologies such as waterfall. 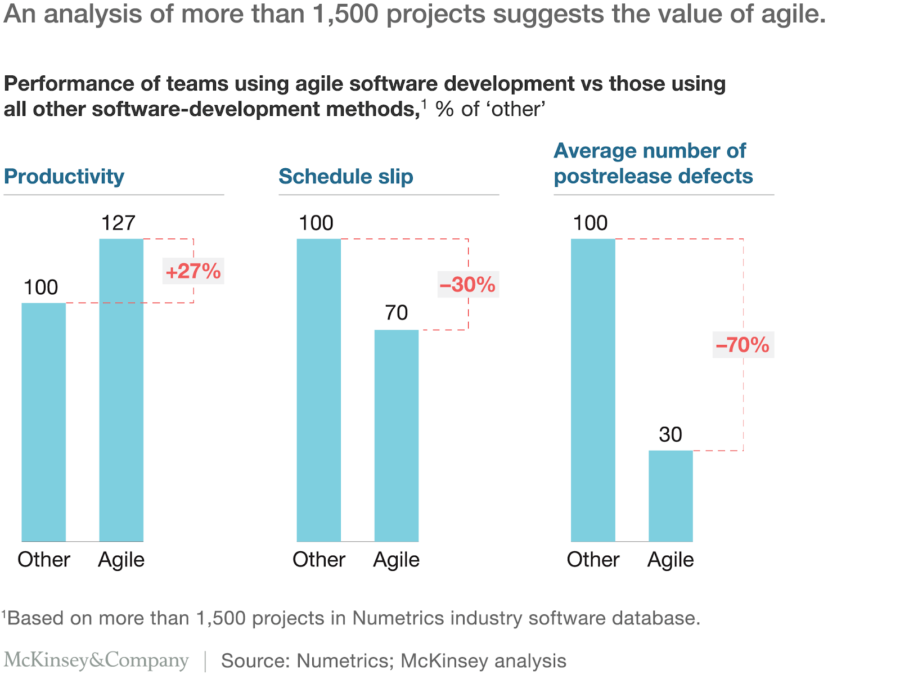 In the end, improved developer productivity means that software products are evolving faster than ever. Unfortunately, this places increased pressure on the QA function. As one QA leader from a Fortune 250 company said in a recent interview with mabl, “Development cycles are getting shorter and new features are coming faster than ever. And we have five productive developers for every QA engineer. There simply isn’t enough time to test.”

QA rightfully relies on automation frameworks to improve productivity; tools such as Selenium, Appium and JUnit now enjoy widespread adoption. More than 80 percent of the respondents to a recent mabl survey use Selenium today, and QA managers are under constant pressure to increase automation. Unfortunately, while Selenium and other frameworks have helped many companies increase their QA velocity as compared to manual testing, these frameworks have significant flaws:

These flaws only become more painful as the pace of development and change accelerates, compelling many teams to limit their use or discard them altogether, resulting in lower product quality. 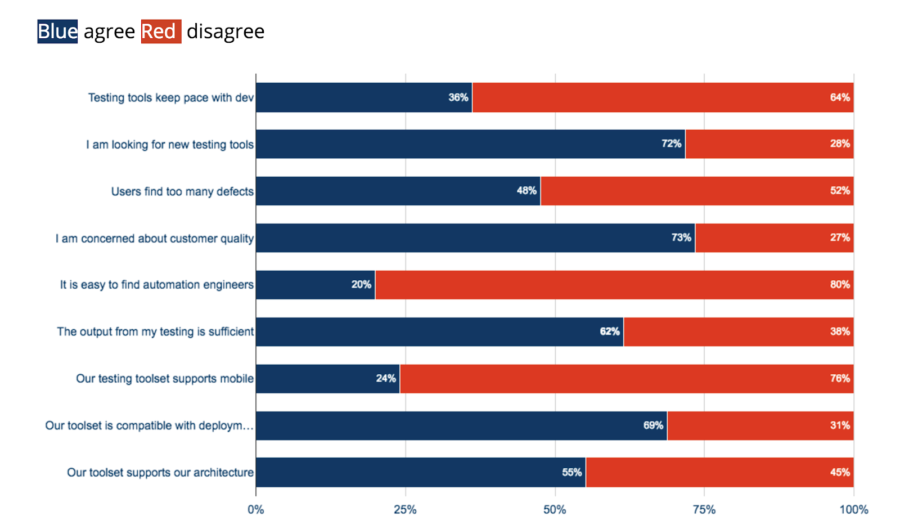 People in testing roles are increasingly at odds with their peers in development. Unable to keep up with the continuous pace of development, QA becomes a bottleneck to product velocity, leading to tension with their peers in development. This constant pressure also starves QA of its ability to make the very investments in automation and process improvements that are needed to improve throughput. The feeling of always being behind with little hope for improvement often leads to low morale within the team.

Gaining consensus on the standard of quality has also become difficult for teams, since agile teams often steer clear of detailed functional specifications for each release, preferring instead to focus on user goals and requirements (see: Agile Manifesto). Because user goals and requirements are open to more interpretation, QA and development can disagree on not only the severity of defects but also the validity of the tests themselves.

Modern software teams are also more open to evolving requirements during a given release cycle (see: “Responding to change” in the Agile Manifesto). Evolving requirements should drive updated test cases, but this requires deep engagement and coordination for already stretched personnel. Rather than testing for quality versus specified behavior, we rely much more on ad hoc and manually intensive exploratory testing to look for defects.

There is Hope for QA

While faster feature development, shorter release cycles, evolving requirements and unclear accountability for end-to-end quality all present real challenges for QA, a new generation of QA tools are emerging to confront these challenges head on.

It Will Be Easy to Create and Maintain Tests

Unlike existing test automation frameworks, next-generation QA tools will not require specialized scripting expertise. Instead, they will offer intuitive interfaces that allow anyone to quickly create and manage tests. This will help teams expand their test coverage and evolve their tests quickly as their products evolve.

Tests Will Adapt Seamlessly to Change

Because they use much more sophisticated, durable methods of simulating user behavior in automated tests, next-generation QA tools will not suffer from the brittleness associated with existing automation frameworks. Tests will not be tightly bound to individual elements within the front-end codebase that change frequently. Rather, they will use machine intelligence to create and maintain sophisticated models of tests, enabling tests to adapt the tests rather than fail when xPaths and other locators change.

QA Will Run in the Cloud

Today, teams struggle with the performance, cost and operational overhead of on-premises testing systems. Next-generation QA tools will take advantage of on-demand cloud computing resources to execute tests faster and more efficiently. They will tap into powerful data processing and analytics services to analyze test results and deliver insights. They will be delivered completely as a service, offloading the management and operational burden to tool vendors.

QA Will Be Part of the Delivery Pipeline

Next-generation QA tools will be tightly integrated into automated CI/CD pipelines orchestrated by Jenkins, Spinnaker, CircleCI and CodeShip. Tests will trigger automatically whenever teams make changes to the product under test and on-demand. The tools will notify team members when there are potential issues so that they can address them before they affect users. It will be simple to run tests and compare results across builds and environments. Decisions around releases, deployments, promotions and rollbacks will be largely automated.

The Definition of Quality Will Evolve

Beyond validating specific assertions in tests, the next generation of QA tools will use machine intelligence to automatically detect and highlight potential regressions in applications. As a result, we’ll think less about tests “Passing” and “Failing” and more about the extent to which changes improve or degrade the user experience. We will focus less on code coverage and more on product coverage. We’ll look beyond basic counts of passing and failing tests in favor of a more on holistic approach to assess the risk associated with a given build or deployment.

Tools Will Be Deeply Embedded Within Our Teams

Next-generation QA tools will effectively serve as extensions to development teams. They will share test results and insights through Slack, Jira email and other common communications channels. They will take feedback and training from the entire team—including product, development, QA and customer success—and incorporate what they learn into their tests. Most importantly, next-generation tools will describe tests and results in plain language, and they will provide useful context to help developers reproduce and fix issues, just as an effective QA teammate would.

The Era of Intelligent Testing

Software quality assurance has never been easy, and the accelerating pace of software development in recent years has made it even more challenging. Thankfully, a new generation of tools are emerging to address this challenge. Incorporating cutting-edge machine intelligence, delivered from the cloud and embedded into the modern development workflow, these tools will dramatically improve the effectiveness of QA, ushering in a new era of efficiency and innovation across the software industry.

“How satisfied are you with the following aspects of the testing process at your company?” 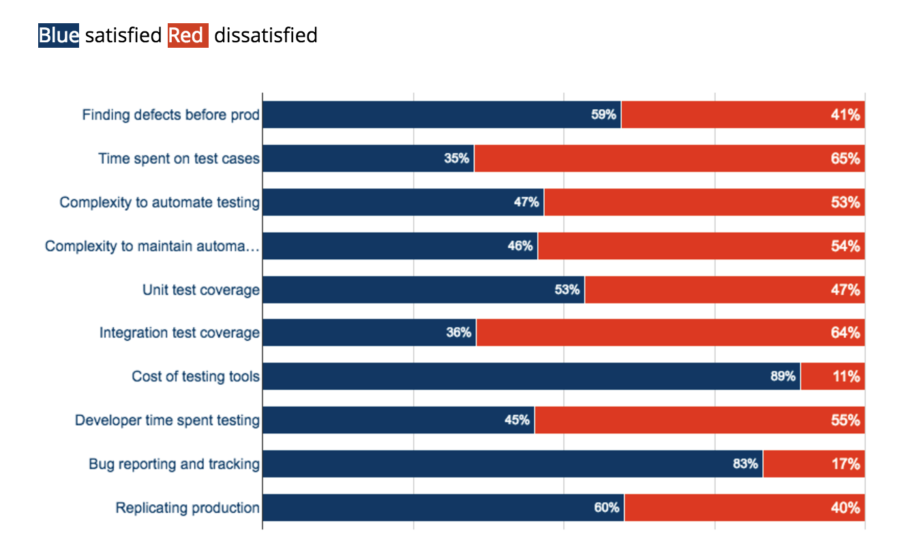 While building constructive culture, engaging workers individually and helping staff avoid burnout have always been organizationally demanding, they are intensified by the continuous, always-on notion of DevOps.  When we think of work burnout, we often think of grueling workloads and deadline pressures. But it also has to do with mismatched ... Read More
« Is DevOps Ready for a ‘Steam’ Moment?
H1B Visas and Software Outsourcing: What You Need to Know »