Most of us use Postman during API development. The company claims 3 million users, and as one of them, that number doesn’t raise my eyebrows any. But if you are like me, you’ve figured out collections, how to back up your data and perhaps looked at tests, but not done much more. As a tool for API development, Postman is powerful and useful, but that means many of us don’t look very far beyond how quick and easy it is to set up an out-of-browser test environment to evaluate request/response.

We use collections to separate projects, but really only as a way to group calls together and keep a single copy of each call close to hand while the history list scrolls through multiple copies.

But for DevOps, there’s more. And they’ve just added to it again.

Packing in the Features

Groups can be used for grouping calls with tests, for example, and a command line tool can perform automated testing. If, like us, you use Postman to test as the API is developed, and use groups to keep those calls pulled together in one place, then testing from the source that already contains your entire API makes sense.

And as of this week, Postman also includes the server side. Postman Mock service allows you to mock up the API calls and specify a valid return value. That means client-side developers can use Postman Mock for testing their app/page, while server-side developers are using the original Post

man to develop the APIs that Mock emulates and testing is running tests from the real-world APIs that already are in Postman for development purposes.

Dev, DevOps, Testing and Ops: Something for Everyone

So a quick diagram shows that the entire development process has a bit of Postman in it if that’s your tool of choice: 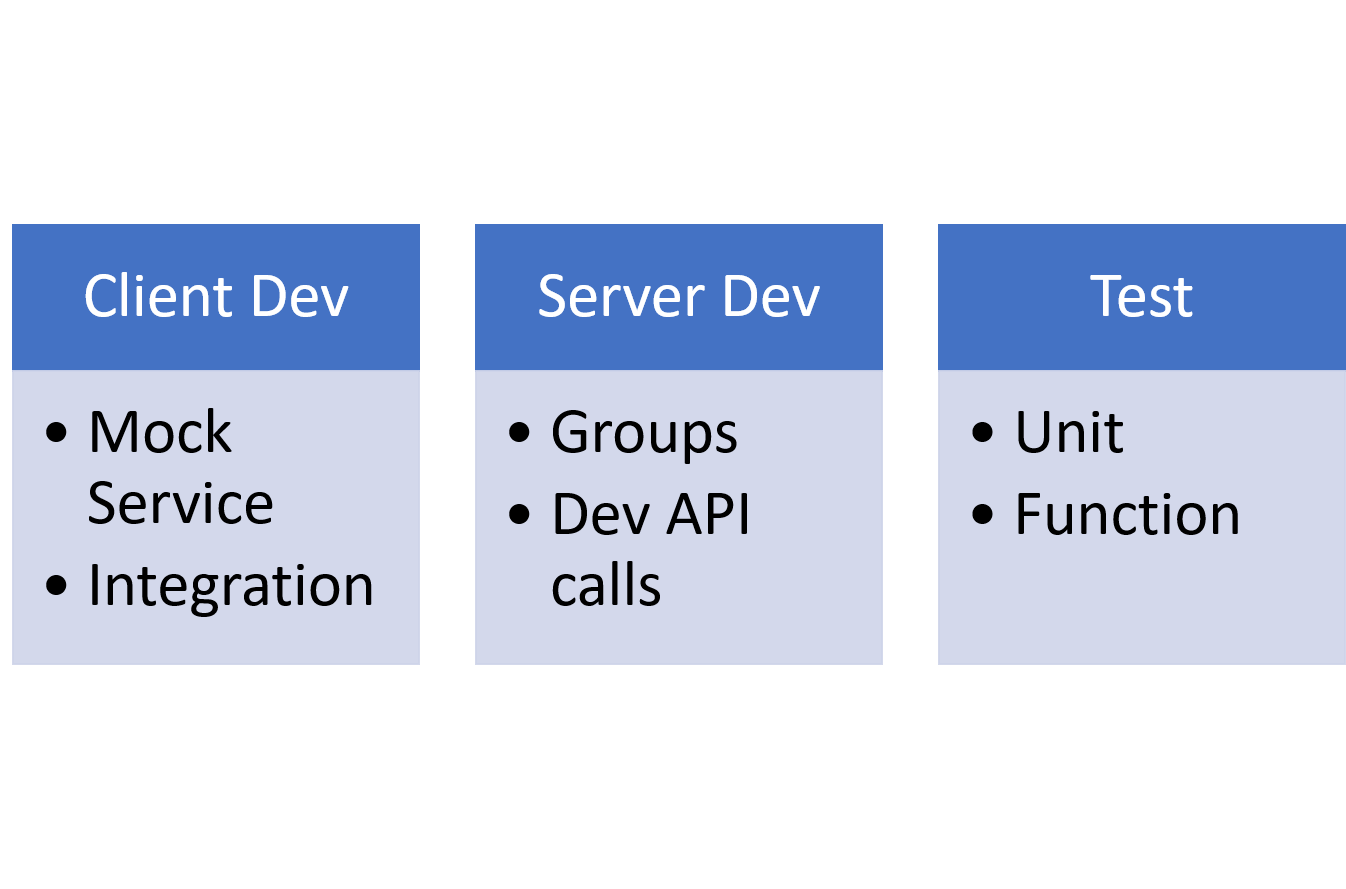 While all assist with agile development, for DevOps, the pieces that are the most beneficial are Test combined with Groups and the new Mock service. As long as the Mock service is configured for a group of calls, test can call them and the logged output can reflect that the test succeeded but ran through the mock service. Once the service is completed and the group is directed to point at the server, testing will run tests against the real API. Using Newman, the command line tool, these tests then can be integrated with your build toolset.

The Mock service can take imports from SOAPui, if you are converting from SOAP calls or use SOAPui for REST and are moving to Postman. I’m told the Postman toolset also supports SOAP calls, but truth in writing, I’ve never even looked to see how that would be done. I’ve used both tools, but never on the same project.

This next bit sounds a bit salesy, and I try not to do that. But for the price, there aren’t a lot of value-add tools out there that deliver this kind of value. Lori and I are talking about going Pro, as we both use Postman in projects. And considering we’re regular users, I figured if we didn’t know about most of these features, many of you wouldn’t, either.

Mock is part of Postman’s Pro package, along with sharable team collections, and API documentation tools. That means it will cost you a little bit of money, but if you’re on a team and have been cobbling together a way to share collections, team collections and associated collaboration tools are worth the price—particularly since built-in auditing will show all of the changes made to Postman collection items. That means fixing a change-based error on the Postman side is easier.

As of this writing, the cost for Postman Pro was $8 per user per month. My guess is sharing groups (or worse, each team member re-creating/maintaining them) costs more than that per month in many cases. Consider that documentation can be generated and shared to a private URL and the fact that Mock service enables parallel development, and $8 sure seems like a steal. Finally, Pro offers API monitoring, so performance and uptime can be tracked to better adjust to the realities of production. There’s more (such as integrations with some great Dev/Ops/DevOps tools), but I’ll stop.

Design, Development (both client and server, in parallel), Test, Monitoring … as long as you can get it deployed, Postman can help with the rest. Postman Pro has a reasonable price for the functionality it offers, and the introduction of the mock service makes agile development, tight timelines and consistent “start to deployment” testing easier. I’d venture to say it is worth taking a look at. And if you’re developing APIs without it, pop out and get the free version, you’ll quickly find why so many of us use it.

You can find out more about the various editions of postman on Postman’s Product page.

No matter where you are in your hybrid cloud journey, security is a big concern. Hybrid cloud security vulnerabilities typically take the form of loss of resource oversight and control, including unsanctioned public cloud use, lack of visibility into resources, inadequate change control, poor configuration management, and ineffective access controls ... Read More
« The Dynamics of Data Science
DevOps Chat: DOES London 2017 Speaker Jose Quaresma, Accenture »