Ever since the 1996 film Jerry Maguire, I can never think about any technology development without hearing Cuba Gooding Jr as professional footballer Rod Tidwell screaming out, “Show me the money!” So I was not surprised when the CIO of a large enterprise recently asked me the enterprise exec version of that famous line:

Q. Where is the ROI in Enterprise DevOps?

Fortunately there is plenty of evidence to show enterprise executives exactly where to look when trying to determine the ROI of DevOps.

Here on DevOps.com, Rajat Bhargava has posted on talking to your CFO about DevOps, outlining four key areas of financial impact: generating cash, reducing expenses, enabling growth, long-term stability. I also had some ideas about financial aspects of getting executive support for DevOps in a great article by Erica Chickowski. And site editor Alan Shimel has posted some excellent insight on vendor-sponsored research from IDC on the cost-benefit of downtime avoidance.

Not enough? Well, we also have several years of research on ROI factors associated with DevOps adoption in both small businesses and large enterprises. The company I work for, CA Technologies, has commissioned independent third party research into enterprise DevOps adoption since 2013; Puppetlabs has run similar research [PDF] with good data on all sized organizations, but especially mid-sized businesses.

You can see in the chart below the areas where benefit accrues through the adoption of DevOps (taken from CA Technologies/Vanson Bourne research released in November 2014): 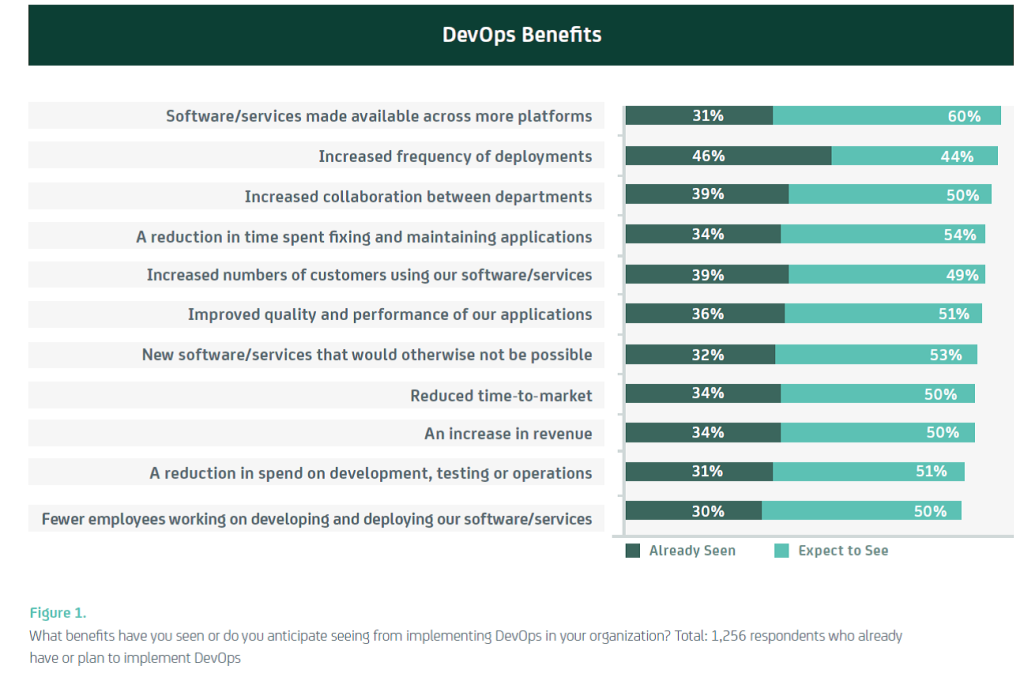 Still need more? No problem! There is also good data on how much of a return you can expect from DevOps. Again, the following chart is taken from the same CA Technologies/Vanson Bourne research: 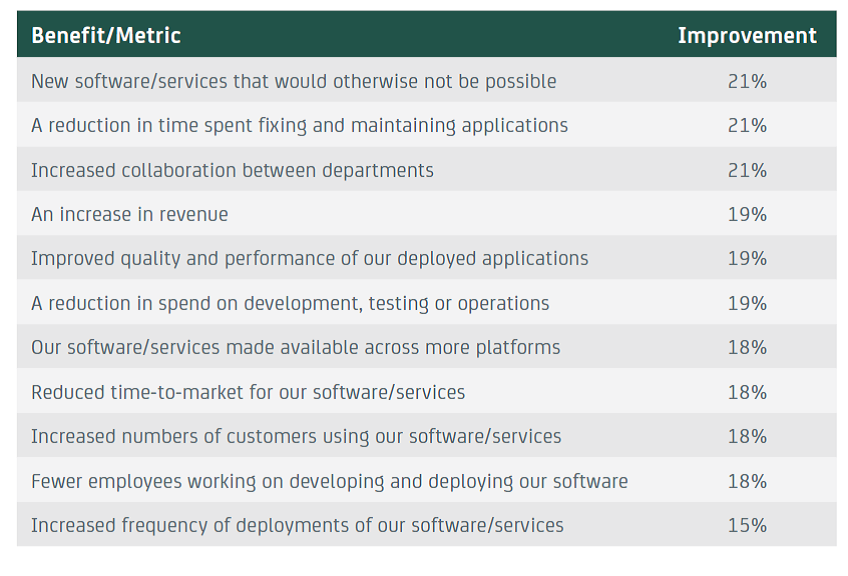 Okay, I get it – you still want more, and you want a straight answer – a single, simple heuristic to work with. In talking with many enterprise CxOs, faster application delivery is a pressing goal, so just this one factor can act as a key ROI driver. At the Continuous Delivery (CoDe) conference in Copenhagen in October, Jan Bosch (Professor of Software Engineering at Chalmers University of Technology) showed very elegantly how faster delivery acts to reduce (i.e. shorten) the ROI period.

His theory is based on the premise that for many (most? all?) businesses, time to revenue is dictated substantially by product release cycles. Maximum revenue accrues around product release, then tails off before spiking again for the next new product release. For example, a smartphone manufacturer will get revenue in 6-month peak and trough cycle as they release a new device twice a year; a software vendor will get a revenue peak with a new game release, which tails off until new DLC is released or a new game hits the stores.

Because DevOps can accelerate business cycles, Jan theorized, business can bring in revenue faster, which in turn makes a DevOps-based business more profitable over the mid- to long-term. This is especially critical in the modern application economy where almost every business is a software business.

So, for example, if DevOps allows a business to release twice as fast, they can effectively double their annual revenue, as seen below. 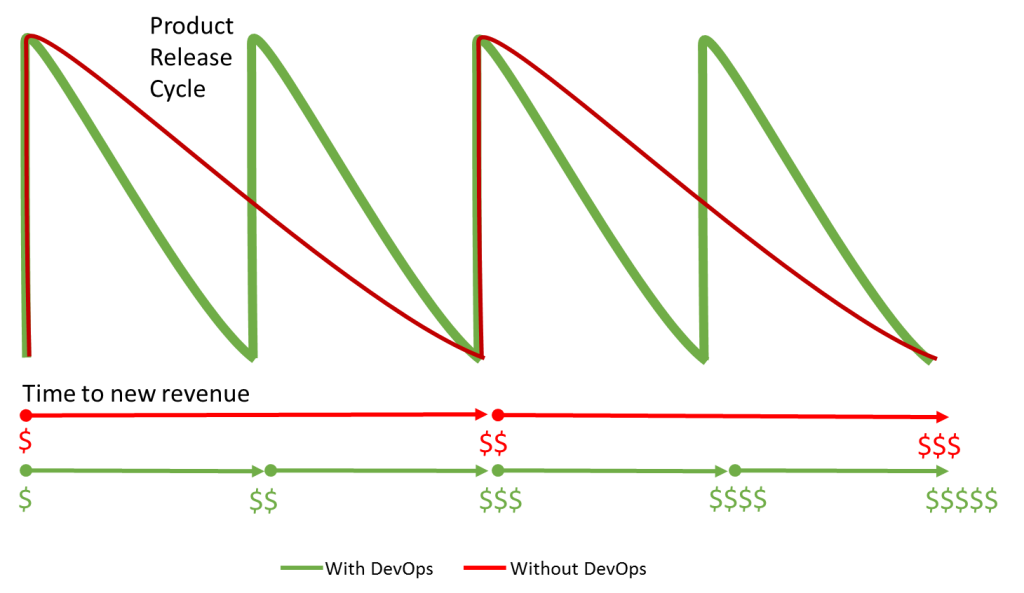 The impact is exaggerated for this illustration, but based on actual data (see above), a 20% increase in annual revenue would be on par with enterprise averages.

Of course, any discussion of ROI must realistically reflect costs too. Adopting DevOps in a large enterprise is not free – it requires investment in people, process, and technology. On the people side, even just a small cultural change often requires new activities and other behavioral shaping. Process change requires training and often impacts short-term revenues. Technology investment includes procurement of automation and measurement solutions – key components of a CAMS (Culture, Automation, Measurement, and Sharing) approach to DevOps, especially in a larger enterprise.

Many of the investment factors can be seen in the following chart, again using CA Technologies/Vanson Bourne research:

Figure 4 Which of the following is your organization likely to invest in over the next year as part of your implementation of a DevOps methodology? Total = 499 ITDMs who have already or plan to implement DevOps in the next two years. Source: Vanson Bourne/CA Technologies 2014

These ROI factors are of course a combination of averages, research data points, and anecdotes. As with all generalizations, when it comes to a specific enterprise your mileage may vary. However, this is certainly a good starting point when building a business case to prove the expected ROI for your organization.

You may find other areas for ROI too – upstream in the PMO, DBA, or downstream in NetSec, training, documentation. If you have additional data points on finding the ROI for DevOps, I would love to hear about it. Add your ideas here in the comments, or connect with me and/or DevOps.com on Twitter – at @AndiMann and @DevOpsDotCom respectively.

The entire CI/CD/ARA market has been in flux almost since its inception. No sooner did we find a solution to a given problem than a better idea came along. The level of change has been intensified by increasing use, which has driven changes to underlying tools. Changes in infrastructure, such ... Read More
« DevOps Dogfood: IBM’s internal DevOps transformation
IBM’s DevOps Journey »