Based on a combination of machine learning, statistical analysis, heuristics and expert systems technologies, VirtualWisdom is designed to enable DevOps teams to be able to apply analytics to resolve issues in near real time versus having to convene a “war room.”

Len Rosenthal, chief marketing officer for Virtual Instruments, said the whole war room concept has become antiquated in the age of DevOps. Instead of wasting time having individual departments within an IT organization coming together to defend their innocents every time an issue arises, VirtualWisdom identifies the likely source of the problem instantly.

The latest release of VirtualWisdom adds to that a predictive capability that identify workload balancing opportunities intended to prevent problems from arising in the first place, he added.

As part of an ongoing effort to infuse AIOps into DevOps processes, the latest release of VirtualWisdom also adds integration with application performance management (APM) tools from Dynatrace, in addition to enhancements to existing support for APM tools from AppDynamics, a unit of Cisco. 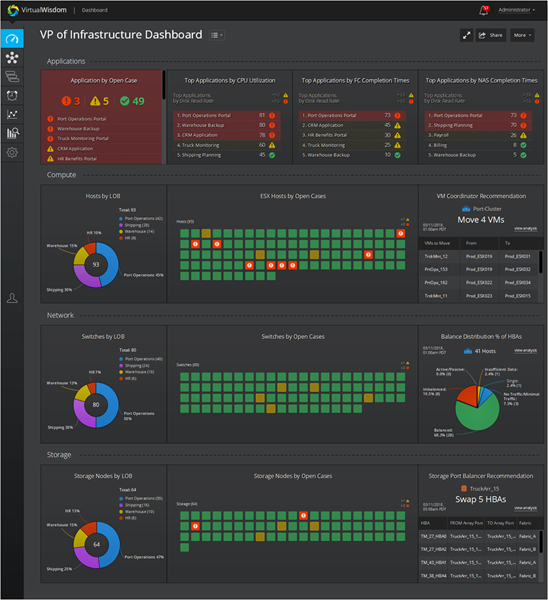 Rosenthal said the rate at which applications are being developed and deployed soon will force the AIops issue in most organizations. As those applications become more distributed across hybrid cloud computing environments, it’s become impossible for any single IT team to manually keep track of all the dependencies that could adversely impact all their applications, he noted.

While increased reliance on artificial intelligence (AI) is all but inevitable at this point, it’s less clear to what degree IT organizations themselves will be reorganized as a result. Most organizations have embraced DevOps to bridge the divide between their IT operations and application development teams. But many of the silos within their IT operations teams soon may be automated out of existence as the need for dedicated compute, storage and networking specialists declines. In some instances, developers are already taking advantage of application programming interfaces (APIs) to assume control over IT infrastructure end to end. That scenario may become even more common as AI continues to automate more of the rote IT operations tasks.

None of that means there won’t be a need for someone to architect the IT operational workflows required to support applications at scale. But it does mean many lower-level administrator tasks soon might be sharply reduced or eliminated altogether. The challenge IT organizations soon will face is retraining those administrators to handle tasks beyond what’s possible to automate using AI.

In the meantime, organizations will continue to experiment with AI. Not every organization is comfortable enough with AI to turn over control to what many still view as a “black box” that doesn’t provide any visibility into those processes being automated. But as more of that visibility is provided, it’s now only a matter of time before AI platforms take move control of the IT environment.

“The Automated Enterprise” e-book shows the important role IT automation plays in business today. Optimize resources and speed development with Red Hat® management solutions, powered by Red Hat Ansible® Automation. IT automation helps your business better serve your customers, so you can be successful as you: Optimize resources by automating ... Read More
« Image Management 101: The Web Developer’s Guide
Boxes vs. Services: The Infrastructure Equation »